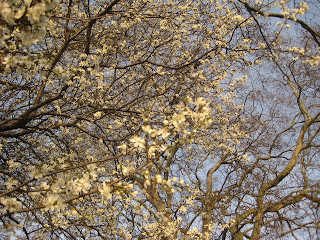 Our first Spring blossom has finally been spotted! We went to the football yesterday and saw it as we walked through the park on the way home.

We saw Fulham lose 1:2 to Manchester City at the Fulham ground. It was lots of fun, although it did not have the same atmosphere as the game we saw two years ago at Aston Villa against Fulham. Before the game Fulham's mascot (I think it is a badger)wandered around the edge of the field and tried to get the crowd motivated. Unfortunately, the crowd were not terribly enthusiastic which was a bit of a shame and so the wonderful chanting we saw last time just did not happen. 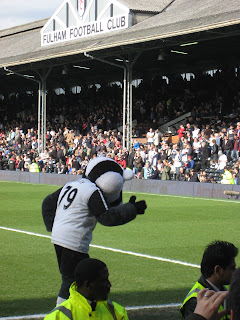 Our seats were just behind the goal and were about six rows from the front. I even got to 'play' during practice when the ball came over the back of the net and I managed to catch it and throw it back to the City players. During the second half of the game, the goalie for Fulham was an Aussie by the name of Schwarzer (thanks for the heads up Salt!) and so I just had to grab a photo of him in action. 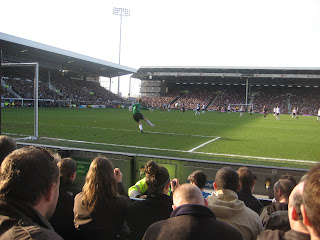 I thought I would add another couple of photos from our weekend visiting the New Forest. The one below is of Winchester Cathedral. We called in and visited on our way home on the Sunday. It is very beautiful and we got to hear the organ as a service was just finishing as we arrived. 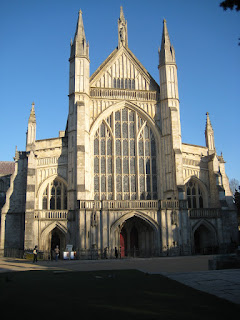 I couldn't resist adding this next photo. We had seen so many donkeys in Marrakech and were stunned to see these three little guys wandering through the middle of Brockenhurst when we drove through. They literally stopped the traffic as they wandered down the middle of the road, then up onto the footpath and then back into the middle of the road without a care in the world. There were quite a few of us with cameras out and great big smiles on our faces. 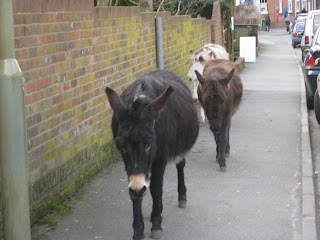 Ok so a bit more news from here. Richard has a game of hockey (or maybe two or three)this weekend. He put out an enquiry to a local club and they are offering to provide gear (just as well because all he has with him is his goalie's bag!) and seem quite pleased with the idea of getting him on the field. It's been five months since he has played and I think he is getting withdrawals! So that should be exciting for us this weekend.

I have also had my first UK haircut. I actually am very pleased ...I should be for 84 pounds! I will try to get a photo soon to add to here.

School is great. Very, very difficult some days, but wonderful all the same. I am down to four boys in my class. Two are part time, but we will be up to three fulltime after Easter. I am facing many challenges with difficult behaviour and have had to do a physical restraint course to manage some of the more challenging moments. I have one student who we need to restrain at least once a week...sometimes even a couple of times a day, but we are making headway. It has been several weeks since he has landed a real hit and I have become very proficient with blocking the attempts at hair pulling and punching. I am told his behaviour has drastically improved since I have been here!

I have decided to up the ante with them all and am pushing them much harder academically. The response is somewhat mixed from them, but the parents seem to be quite supportive of our endeavours.
Posted by Ali at 9:46 pm

Haircut?.... brave girl..... its always the last thing I do when I move! I need to listen and look and learn before I let anyone near my hair.
Its just so lovely to read your blog... I read it daily by the way!
Molly is on heat (7month old manx). We have her locked away at present, she isn't due for the vet for a fortnight. So needless to say we are sung to all day and night at present.I'm glad I'm not into breeding... what a carry on!
Connor has his first cross dressing thing tonight at Venturers. He is no longer a scout!
He is doing well at school, seems to enjoy it all.
7 school days and its a week off (Easter)... looking forward to a sleep in and a bit of TV. Enjoying my classes, not enjoying much else.
Glad to read about your kids. Of course their behaviour is better with you there.... of course!!! coz its you.
I have a young lad who needs some restraint most days. He is about to go on a modified program (4 period day). I hope it works! He is struggling to cope with the 5 changes, all those kids and of course Mum is trying to study, so less attention at home (only child) has come to a head. he reacts physically......... I'm hoping lunch with him everyday will help. Once Christine has finished her detention with him of course!They will certainly work!!!!!ha!
OK... apple pie for tea with cream... oh! and chilli pasta!
lotsalove, always...

keep pushing! its good for them... should be more of it I reckon!