Teaching at Kestrel House was the experience of a lifetime and one which I will never forget.   I will miss my students and the staff so much but I am sure as one door closes another opens. There were some things from my classroom that I do really want to share and the most of the following is something I have been trying to work out how to write about for some time.  On my last day at school I was really humbled by the words and actions of my class as a whole and in particular the words of one of my students and this prompted me to write it all down.

In my classroom we had a 'compliments tree'.  This was started after long discussions with the educational psychologist, occupational therapist and speech and language therapist at the school about what I saw as one of the major barriers to my student's learning.....their self esteem.  One particular day we had the supervising educational psychologist Ros, visiting us.  We were talking about how we planned to ask the children daily about something they had done well in the day and to write it down in a book for them so that at the end of the year they would have tangible evidence that they did do things they were proud of and that they had had success in their school year.  We discussed how a day is a long time for these children to focus on and maybe we should write down something for each session in the day.  That way if they had a 'blow out' at one point in the day they would see that it did not mean their whole day was a disaster,  and would hopefully start to see that they had just made a small step backwards for just a part of the day.  Ros then came up with the wonderful idea of making those thoughts into leaves of a tree and from that idea this grew in my classroom! 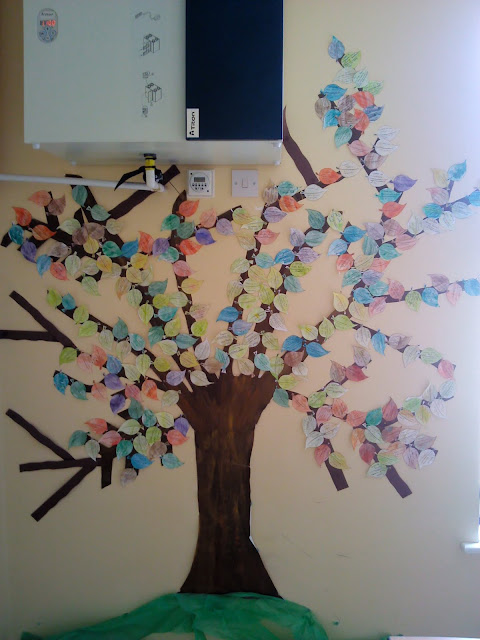 Our 'Compliments Tree' started as a brown trunk and branches and daily each boy's favourite self compliment was added as a leaf.  They were each given pages with the outline of the leaves and their names in the stem.  They learnt to do a wash with watered down acrylic paint and these were then stored.  At the end of each day their favourite compliment of the three they had given themselves was written on to one of their personalised leaves and added to the tree.  Some days if they did not mention something we as adults thought was note worthy we gave them extra leaves from us.  As you can see by the end of the year we had THE most beautiful piece of classroom art imaginable!  It had to be one of  my favourite parts of my classroom.

This wonderful tree never failed to draw comments from classroom visitors.  I heard all three of my boys proudly telling their parents about it at some point and that certainly brought a smile to my face, particularly as they were not to sure about it to begin with!

At the end of the year I decided that along with the books I would have the boys make individual trees.  We had them paint individual trunks and branches onto A1 paper and in the last week of school we removed all the leaves from our class tree and sorted them into the three separate piles for the boys.  They then glued their leaves onto their own trees.  It was a beautiful time as they pasted them on and reread some of the wonderful things they had done over the course of their school year.

On the last day of school we had an assembly and my class showed their individual trees to the rest of the school.  Unfortunately I don't have any photos of the individual trees, but believe me they were gorgeous!  I was about to take my class to sit down and the head teacher said my class had something special for me.  They, and a student I had taught in the previous school year, had made me a tree of my own.  I am sure you will agree that it is stunning! 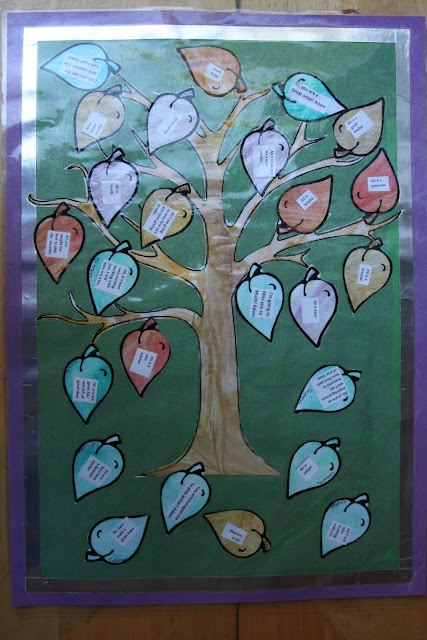 Each leaf has a note to me from one of the children or the teaching assistants I worked with and they are all very, very special.  On the back of this is a poem written for me by one of my students.  When I started at the school in January 2010 he could hardly read.  He did not write anything down without a major, major fuss and a massive amount of support but this is what he wrote for me on the last day....


To Ali
If there was a storm that was going to destroy the
world
Alison would stop the storm,
because her power comes from her hugs.
The power from her hugs gives us life!
I will miss you.
From T.
This was read out first by the child and then as he was crying as he read it, and it was difficult to understand, it was read again by the Head Teacher.  She cried as she read it and there was not a dry eye in the room.  I have never felt so overwhelmed and humbled by the actions and words of one of my students.  I was so proud of him and how far he has come in just over 18 months.  I guess this just brings home one of the main reasons I teach!
.... and yes Ash, I will 'Smile because it happened!'
Posted by Ali at 10:32 pm

What lovely memories to take on your next adventure. I'm with you... its these small gifts... every so small in t4eh scale of things that keep us teaching.... they feed the addiction... that smile, that thankyou, that nod... the finished work... the thankyou card... soooo specila... keep them safe

Reading this on your blog brought tears to my eyes - it is so awesome! And this after I already knew the story from dinner! ;-) xo