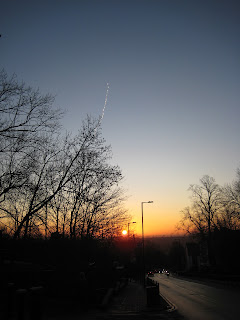 I thought I would start this entry with the view that greeted me as I walked from my first bus to the second on the way to work yesterday morning. It was a cold, crisp morning. We had had some very light snow overnight and as I made my way between the two buses the sun was rising, the sky above that was a beautiful soft blue and (I am not sure if you can see it in the photo) there was a vapour trail from a plane in the sky. Simply stunning, and not to mention the excitement that I am finally going to be leaving for work in daylight very soon! Yesterday was a good day at work. Let's just say it was leading in to today.

I also thought that seeing as though you had seen the back of our house I would include a photo of the front for you today. Our front door is the one in the middle. I guess it is what some call a two up/two down small but comfortable....not a lot of housework to do! 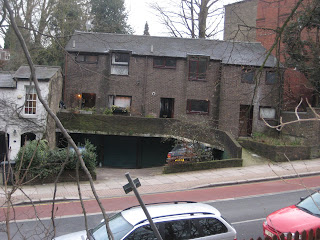 I had the most fabulous day today. I had three students in this morning and two this afternoon. The two this afternoon can often have problems relating. There was a bit of kerfuffle early in the afternoon with one of them getting quite cranky. After a lot of talking and a lot of reasoning we moved into afternoon play. The one who can often become physically violent asked for space. A big tick there and a huge move forward. After play we have snack and drink time and then move into 'Special Reward' time. The afternoon closed with the two of them modifying a 'den' one uses as his quiet area - together. It is made from chairs and a sheet....think indoor cubby! The student who had asked for space gathered a 'duvet' and bean bags for comfort and to help the original builder of the den. They have 'Special Reward' time each afternoon and chose to do this in this time. Normally they won't do anything but computer time. I ended up holding back the tears as I watched them leaning up against the two bean bags in the den and chatting....actually chatting to each other. I had to apologise as I had stolen their 'Special Reward' it had become mine. I didn't think things could get much better....wrong and wrong in a big way.

I decided to read the boys the Cherokee story of the "Two Wolves". I know I have sent some of you this in an email previously. It is the story of a grandfather talking to his grandson about living with the two wolves within. One wolf represents all the negative aspects within us all and the other the positive. The story ends with the grandson asking the grandfather which wolf wins the battle within and the grandfather replying 'The one you feed'. I had apprehension about whether or not the boys would get the point, but joy upon joy they got it and with interest. They were talking about the events earlier in the day and how the specific 'wolves' were winning at given times. They referred back to the 5 point scale when a 1 means you are calm and a 5 means you are losing it that I have been teaching them over the past few weeks. It was honestly one of those teaching moments that makes me know why I teach. Pure gold!!!
Posted by Ali at 8:45 pm

So glad you had such a fabulous day. Your boys sound just gorgeous. You must have felt such joy and satisfaction at such magic moments. We love you both

Hi Ali
thanks for the photos, love the early morning. it sounds like you are in your element with your teaching right now. i have the "two wolves" permanently on the wall in front of where i am sitting in the "love" room right now. i often refer to it.
Much excitement, new patio roof and carport starting in the next week or so. will send photos! also will send photo of me in my new reading glasses which i hope to get on Thurs or Fri this week. I hope the rest of your week is as rewarding as it has been these last few days. love to you both. Jx

Hey Al,
I am your first Follower! It works. Looks like a grand life - enjoy. How wonderful to go from subtropical to snow! Fabulous xx
Love your stories:)

Good morning gorgeous friend. Happy Birthday!!! hope your day is filled with love and happiness. biggest hugs from everyone at our house. Jane xxxx

Thanks so much Jane. I will get back here and add more soon. I have been incredibly busy with the start of the new term at school. Lots of love to you all too. XXXXX

I love such moments... its those moments that are just so addictive and keep me teaching. Bugger the politics of the staffroom and the politics of education.... those real moments in class, when you see the lights come on... thats the moment you teach for, thats the high, the reason why! Keep sharing these with us.... I love them.

Coralie, I know just what you are saying. I am doing my best to avoid all the politics here....can't help myself though when it affects the kids!