Our day on Monday in Cornwall

Now to yesterday! Our day started in a very relaxed manner yesterday morning. We had our breakfast of blueberry pancakes a little later than the previous two days and then headed off for the Lost Garden of Heligan. This garden was one that had been maintained by a group of gardeners before the first world war and as a consequence of most of them losing their lives had become incredibly overgrown and forgotten until the remnants were rediscovered about 20 years ago. A group of local people then decided to rebuild them to something resembling their former glory. ...The same group of people later went on to create the Eden project that we visited on Saturday.... The gardens are stunning with some incredible installations. 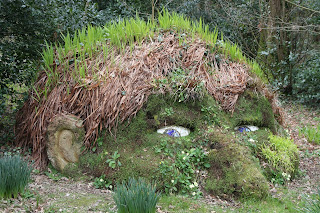 This is the Giant. He was made around the stump of an old tree and then built up using mud and clay. His eyes are old china plates and the the plants were selected for effect. His hair is apparently orange in summer and silvery grey in late autumn. 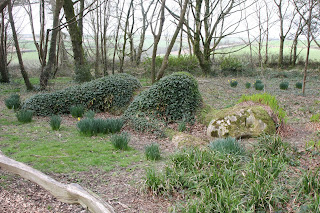 The Mud Made was made from a metal and wood frame, which was then plugged with mud and clay to create her. She was then planted with ivy to clothe her. Her face is incredibly beautiful...almost buddha like in many ways.

We spent several hours in these gardens firstly wandering through the woodland where we came upon the two installations above and then into the rainforest area which is built around several ponds that are stepped down a valley. It would be astounding in a few months. The Gunnera are just starting to get their leaves again and when they do so properly each leaf will be over 2 metres across ... they are stunning plants. The rhododendrons and magnolias were stunning. Sorry we have no photos because they just could not do justice to the vision! The final area of the garden was the old formal garden area. There were some flower gardens, but the majority of the garden was a vegetable garden and orchard. There was also an environmental area with a wonderful bird hide. It was wonderful!

After Heligan we went to Mevagissey for lunch. It was quite disappointing as the shops were filled with tat! All the really naffy cheap tourist fare. Really quite tacky so we didn't stay long. We next headed to Polperro a gorgeous little seaside village. We walked for miles around the harbour there and it was stunning. Again this village has lots of narrow windy streets and lovely galleries, pubs and cafes. The wind while we were there was blowing an absolute gale again, but that somehow added to our walk around the harbour and up onto the headland area.

Some views in and around Polperro 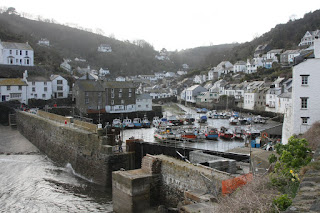 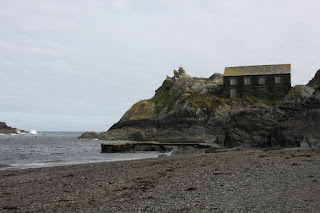 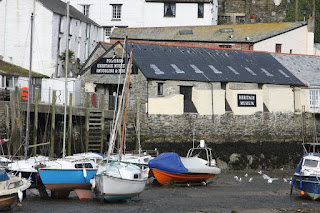 After Polperro we came back to the pub just up the road for dinner. We made friends with the pub dog ... an English Springer. He is just beautiful and greets every person as they come through the door. We found a table near the fireplace and he came and sat with me for a while. What a pleasure! After that it was home to write the blog last night.

Looks like I am going to stay a day behind. We go home tomorrow for a couple of days so I may be able to catch up then.
Posted by Ali at 9:56 pm

I would just love it if I could make something like that giant in the school grounds. Wouldn't it be just fantastic.
What sort of tides are they? They seem quite big, like at Toogoom?
I'd also love to make a sculpture from electrical goods! wow! how awesome that would be.
We spent the day at Hervey bay yesterday. I took the boys (Connor and his mate) to wet side..., then we had a BBQ down at the beach, they had a ride of their "rip sticks" then swam for about 2 hours.... I sat at my computer and planned the term for year 10 art.... yet to finish reports, yet to finish planning.
love you blog, enjoy it all.... happy easter!

where are you???? Hellooooooooo! anyone there?