Yesterday, Richard and I celebrated five wonderful years of marriage! However, before I get to that I have some rather sad news.....
It is poor Bruce! At the moment he is sitting in our garage unable to move. He did a wonderful job of travelling more than five thousand kilometers in under four weeks, but then about two kilometers from home started having a few issues. He burped and gurgled his way home and then magically, sorted himself out again. 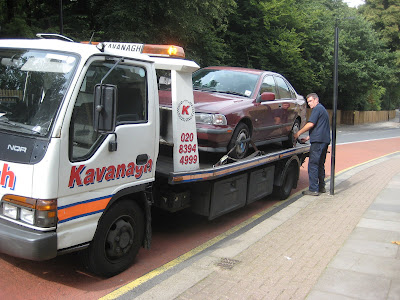 That weekend he didn't miss another beat, but the following weekend (last weekend) when we were on our way to do the Aspie thing (visiting steam trains) he got as far as Brixton (45 min from home) and decided that he could do no more! So this is how he came home.....
He is off to have a checkup tomorrow and to see if it is worth our while financially to have him repaired.  His MOT is about due and he has to pass a road worthy to get that so if the repairs he needs are too costly we will be on the lookout for another vehicle!
Last week was my first week back at school.  Let's just say that I think I will be in for a few challenges this year!  By the time I got to Friday I was exhausted and really looking forward to our weekend.  We had decided to celebrate our fifth wedding anniversary by going to one of our favourite places int he UK, York.  We left yesterday morning and went up by train and I have to say we had THE most wonderful time!
We set off early Saturday morning.  It turns out it didn't need to be quite so early however as the train to York was over half an hour late!  Not to worry, people watching in London stations is fascinating.  Eventually we were on our way and arrived in York just over two hours later. 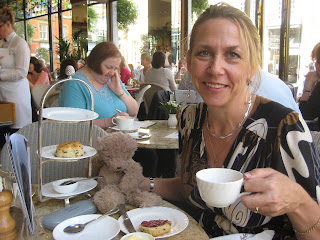 We took our luggage to the hotel and dropped it off and then proceded straight to some very famous tearooms, 'Betty's', where I enjoyed a totally delicious Yorkshire Cream Tea!  Harvey of course, was terribly impressed.  We had to queue to get in there and it was well worth the wait, particularly as it meant we managed to avoid a very heavy shower and sit inside where it was dry while the queue continued to grow longer out in the rain!
From 'Betty's' we decided to go to the Jorvik Centre.  It is a fascinating museum about the Viking's who lived in York.  I had been there before in 1998, but Richard had not been so off we went!  It has changed quite a bit since 1998, so I am pleased we went!
Next it was off to National Rail Museum.  Harvey had apparently told Richard he really wanted to see it and this is why..... 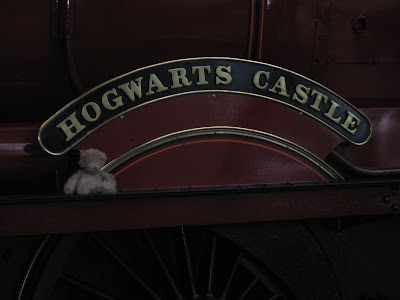 ... Harvey got to sit on the train from 'Harry Potter'!

As we wanderered back into town from the railway museum we finally found the place a bus driver tried to send us to five and a half years ago. When he told us where he wanted us to go, I thought he was having a go at me (I had had a few wines that night!). Say the name quickly and then see if you would not think he was having a go!! 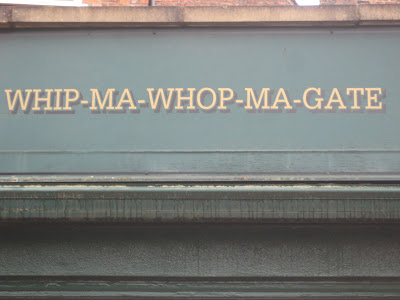 After Whip-ma-whop-ma-gate (you want me to go where?), we came across these guys (Morris Dancers) dancing in the street: 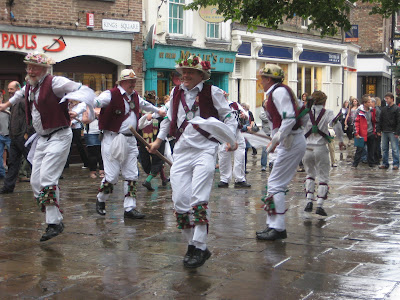 It is honestly one of the loopiest things you will ever see!  Grown men with bells on their legs dancing around and banging sticks together.  I couldn't help myself and had a great big smile on my face and this is what happened!


Just one of those extraordinary life experiences!

After there we went back to the hotel and then went out for a vary romantic anniversary dinner.  We shared a bottle of the same champagne we had on our engagement night, but most importantly we renewed our wedding vows.  Every anniversary is special, but it seemed to me that our five year anniversary was a great one to mark.  So I took along a copy of our vows and surprised Richard with them once the champagne had been opened so that we could truly make a toast to us and this wonderful life we share.

This first five years has been incredible, who knows what the next five will bring!
Posted by Ali at 10:54 pm

oh! Happy Anniversary you two... what a lovely idea to restate your vows... so you... too!!!
I just love the photos of you doing your Morris dancer thing... well done Richard. These sort of photos are just fantastic to look back on too... love the boots by the way... love the boots! So Imelda... how many now???
I love boots, but up here? well... I'd wear them for 4 weeks a year.
poor Bruce....... poor Harvey! He did try to see, but I'm sure the train made up for any Morris he missed out on.
weather warming up. days are around 25 and nights about 14. Floods in Victoria, Lake Eyre is flowing, wildflowers everywhere out there they say. The Coorong is filling and the Murray is rising... all good!
HAPPY ANNIVERSARY...

That was hilarious. love the boots too! and the dress, have i seen that one or is it new to go with the boots. Poor old Bruce, sending him love from this end. harvey is such a lucky boy, the places he's been and the people and monkeys he's met. have you lost weight? i hope this year at school doesn't take too much out of you. i am enjoying your journey so so much. i love it that you renewed your vows, we have thought about doing the same on our fifth anniv next year. Damian wants to go to Birdsville for his 50th bday next May, so we may renew our vows somewhere romantic, like Charleville!!! hmmm, i'm for the beach at Byron again. i know it must take you a far bit of effort to put the blog together, but I love it and i love you and i look forward to each and every installment. love Jane xxxxx

Thanks for the anniversary wishes Coralie and Jane. I'm up to my third pair of full length boots and will probably stop there...well that's the plan at this stage. Jane I have had that dress for a couple of years now ...bought in the same shop in Hervey Bay that I bought my wedding dress.

I have lost a little bit of weight (only a kilo or two I think, but I haven't weighed myself since the end of January so I don't really know...the jeans keep falling down though. Like everyone the first place I lose weight from is the place I least need to lose weight from...very much the case of the disappearing butt!
Love you both! XXXX

Mum you're a crack up! Where were the Morris dancers when we were in York?!
We did find Whip-Ma-Whop-Ma-Gate though- I bet it was named when everyone was pissed and thought it sounded great at the time!
Love you crazy woman x

righto! now look... I've read 5 wonderful years 500 hundred times now... please... How about an update. What is happeneing, what has happened, why are you staying, whats the goss????! Goodnessssss me I'm having withdrawals!!!!!
Next year........... Christine is off to Hervey Bay into a BM role at Urangan and Hervey Bay Highs... dare I say Yipppppeeeee! she obviously flashed a bit of tit to get that one! Or.......... no-one else applied!!!! we have a new lady Michelle-permanent next year, has been teaching preps! Ron got the HOSES job at Maryborough High..Lee-ann asked if any of us want the curriculum job here (what Christine did).... I laughed!
I'm teaching one year 8 art, multi art, a SOSE , 2 PFA year 8 classes and the rest as supers! not looking forward to that at all!
What have you been doing? How is school? What adventures have you been up to? How is the weather? Cold I see!just a bit of snow I see!
Hope to hear from you soon!