A day in Gibraltar!

OK so we are actually home now, but I thought I would try to keep filling you in on the events of our holiday.

After our police escort from Jerez we headed down to Gibraltar. For those of you who may not know, it is the southern most point of Europe and is part of Great Britain. The trip from Spain and into Gibraltar was a very slow grind, with a traffic jam that backed up for miles as the border controls took place - or so we thought! When we got to the border they just waved us through no questions asked maybe because our car has British number plates! We arrived at our hotel 'The Bristol' and were slightly less than thrilled with the hotel, but the location was great as it was only 30 seconds walk from the main shopping district!

We started with a bit of a wander and then thought we would go for a drive to Europa Point to see if we could see Africa - it is only a few miles across the Straits of Gibraltar. Unfortunately the conditions were terrible and although we think we may have seen the African coast we are not sure. It was amazing though how many ships were either waiting to go through, or had just passed through. Unfortunately trying to photgraph even them was a waste of time because of the mist. The point itself is undergoing a renovation (believe me it needs it!) and seems to be the only area of Gibraltar that is going ahead. 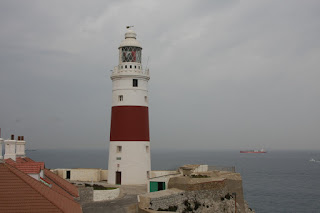 The lighthouse helping the shipping traffic to identify the end of Europe and somewhere out there in the mist is Africa! 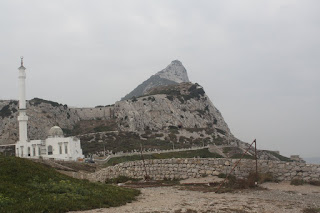 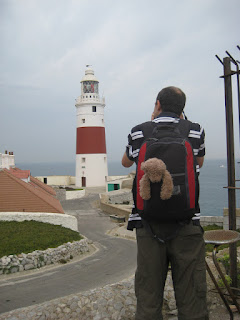 Harvey came along for the ride!

After visiting the point, we decided to head up the rock to see if we could see some of the Barbary Apes. We drove up the hill and came across some sitting a little way off. I decided to try to take a photo and wound down the window (should have known better!). As I sat there, I saw movement out of the corner of my eye and tried to wind the window up again and couldn't do it (I always push those damn buttons the wrong way!). I tried to tell Richard to drive - he didn't understand what I was saying and stayed put. Next thing I knew I had a male ape coming through the window at me! Canon to the rescue! I shoved him on the shoulder with my Canon 450D and he backed off - just a little anyway. I eventually managed to get the window up and he than sat on the rear vision mirror and the windscreen near me and peered through! My heart was racing! He was then joined by a little friend and we had two sitting on our car. We tried driving (only very slowly) - they peered through to try to see what goodies we might have. The little one thought it might try our windscreen as a slide and slid down it in front of Richard! I am so glad we have Bruce (the Volvo) - what's a few scratches on the paintwork between friends! 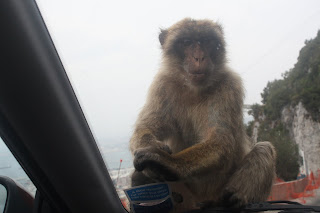 My friend the male monkey - unfazed by being shoved out of the car with a Canon! 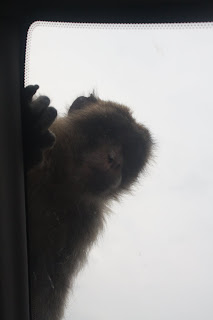 'Let's see, what interesting things do you have in there!'

Sorry we got no photo's of the little one using Bruce's windscreen as a slide! Eventually they got bored and moved off our car. We moved around the bend to see all these people out among the apes, and they and the apes were very relaxed! What a dill I felt for being so terrified! Richard decided to get out of the car and after a quick calm down (just breathe!) and a few minutes of seeing Richard was OK I braved joining him! 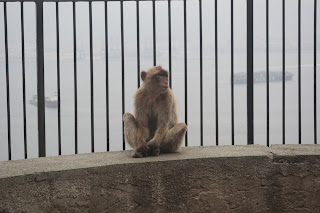 Butter wouldn't melt in my mouth! That's Spain in the background across the Bay as opposed to the Strait 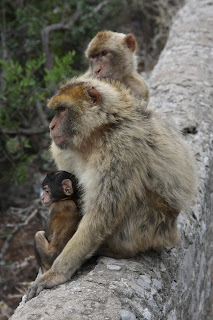 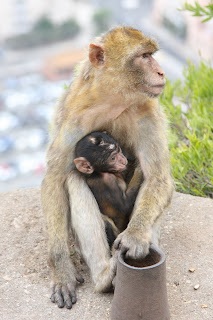 Mum and baby were sitting quietly until a bigger male became agitated and charged through carrying on - I think he and some others were having a 'bit of a discussion'. Mum took off and the baby fell off her. 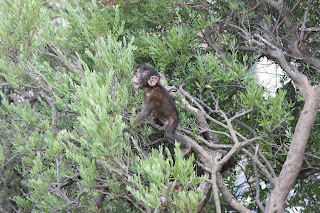 The baby then charged up onto a thin little branch (big male couldn't follow) and kept yelling until mum could eventually come back.

OK there had been enough excitement for the day. We headed back to our hotel and then out for dinner. At dinner we worked out just what we had been missing and promptly decided we couldn't wait to get back to Spain! The food was fairly ordinary! OK maybe a good night's sleep would help! So we headed back to our hotel. Within about ten seconds of climbing into bed we just knew a good night's sleep was not on the cards. It felt like trying to sleep on bloody Brighton beach - thats the one here in the UK with all the pebbles and not the one in Melbourne with all the nice soft sand! Every single spring in the bed was very, very obvious! Richard describes it as sharp corrugated iron! I put a pillow under my body, Richard resorted to the fold out bed and said at least the lumps in that were soft!

Our overall feelings about Gibraltar were somewhat tainted by the hotel. It is very tired (actually that statement suits both the hotel and Gibraltar as a whole). Gibraltar probably has problems as a result of the reduction of the presence of the British forces and the money they would put into the community. It seems the whole place needs a facelift, but there is no money in the community to do so. A bit sad because there is lots of potential!
Posted by Ali at 6:59 pm

so you are home again... back to work??? It is a bit sad when your visit to Gibraltar is tainted by the bad bed.... don't we all understand that one. I have horrid memories of various places I've stayed where the bed/room/shower or other was awful...
So lovely to read your blog. We had last weekend at Cania Gorge and are now planning a long weekend away next winter. I think it would be hot and horrible in summer! We explored the lake (dam)and Connor went abseiling. So we will camp for 4 days next June holidays.
This weekend I'm t a drawing workshop, Connor is doing Venturer duties at the Jet boats and then he is sailing Sunday. Its the start of the season. I am the timekeeper this year as long as Connor has a sail. I miss 3 days because of workshops.
School is getting me down at present... feeling a bit like a mushroom, except I'm not actually growing in the dark... just in the dark! Some days are good, some are just awful... but in my classes is great!

What an experience. i'm wondering if the monkeys could see Harvey buckled up in the back seat and thought he would be fun to play with!!! good work by the Canon. all in a days journey... Jx