A wrap up of Vienna and Krakow!

I know we have been home nearly two weeks now and I still haven't finished writing about our holiday in Europe and we have since had another 4 day day getaway!  So much to tell so little time to do it in!

After visiting Hundertwasser I spent the next day in the Belevedere Gallery in Vienna.  It was brilliant and I was lucky enough to spend the day in a stunning setting looking at amazing art.  Richard decided that the previous day's saturation was enough for him and went off to look around Vienna on his own.  In the process he found us a great place to eat that night so it was good all round! 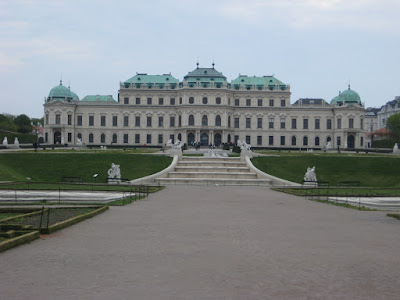 I visited the Upper Belevedere first and what a pleasure that was.  The building is an old palace and is a stunning piece of architecture, worth the visit in its own right.  The main draw card for me was the work of Klimt.  There were many pieces his work, but 'The Kiss' and 'Judith I' were the absolute draw cards.  Both had me sitting in front of them mesmerised.  The expression on the faces and the detail in both pieces of work was incredible.  'Judith I' was apparently the first piece he created in his gold phase and 'The Kiss' the last.  Richard and I had seen posters of both the day before and had thought them a little boring in amongst Hundertwassers work.  Seeing them in real life changed my mind considerably!

To get to the next part of the exhibition I walked down through these wonderful grounds to the Lower Belevedere (you can see Vienna in the backdrop!). 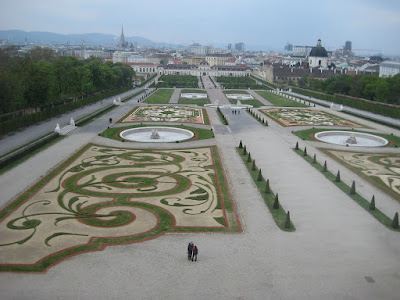 The lower Belevedere housed two special exhibitions.  The first on the work of Egon Schiele.  What a tortured soul that poor man was.  He was one of the youngest artists taken into study art in the Vienna College and then had a disagreement with his professors and went off with some of his mates to start their own movement.  The exhibition was of his portrait work and was fascinating!  There were self portraits and portraits of others that were both commissioned and painted under his own direction.  He did portraits of his lover and then later of his wife that were very poignant. He unfortunately died at the age of 28 during the Spanish Flu epidemic.  The flu took his pregnant wife and the child she was carrying and then a few weeks later it also claimed his life.  A tragic story really.

The Second exhibition was on the 'Dynamic' movement and was incredible.  I never thought I liked modern art!  That statemnt is now showing itself to me as pure ignorance.  I think it is more accurate to say I didn't understand modern art.  Now it is really starting to 'speak' to me in its brilliance (Oh I still have so much to learn!).  On the wall of the exhibition I read a statement from the futurist painting technical manifesto of Turin that said 'Everything is in motion, is flowing, everything happens with the greatest rapidity.  A form is never motionless before us, rather appears and disappears unceasingly'  and then turned and saw a painting called 'The Dancer' created by Ludwig R. Reutterer in 1920 and almost jumped up and down with excitement because finally I got it!  I understood why Cubists and Kinetiscists created the way they did.  I saw the movement they were expressing and just loved it.  I was in awe of the talent of these artists and then went from painting to painting saying 'wow' over and over again! The work of Erica Giovanna Klien, Giacomo Balla, Elisabeth Karlinsky and Franz Marc held me staring and studying. Look up their work if you don't know it.  It is incredible! I think I was in that exhibition for about three hours and had no idea any time had passed (sorry darling, I will one day remember to check my phone when I am in an art gallery!).

I will leave our trip to Vienna here with an image of a bag in one of the tourist shops: 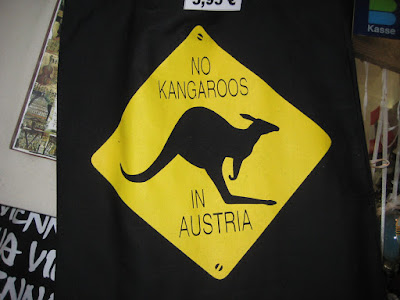 Apparently the Austrian/Australian confusion is as common for them too!

We drove from Vienna to Krakow and went to Auschwitz/Birkenau one day and did some sight seeing on the second day.  We both really loved Krakow.  The people there seemed somehow more at ease than Prague or Vienna.  I have added just a few photos from our day in Auschwitz/Birkenau as a reminder. 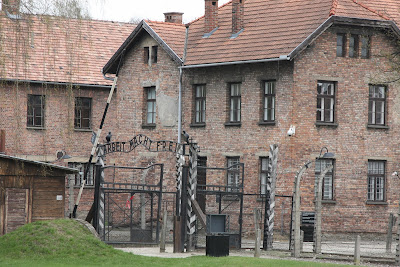 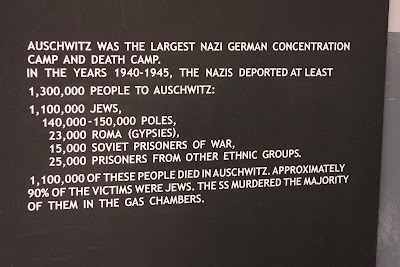 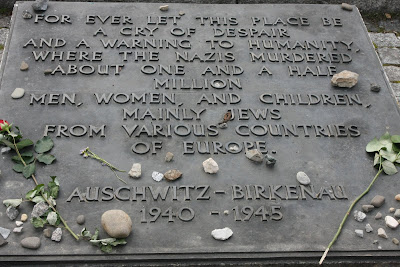 There are many more but I will move on to Krakow!  This is one of the first views when we went into Krakow on the first night for dinner.  It is called the Barbican. 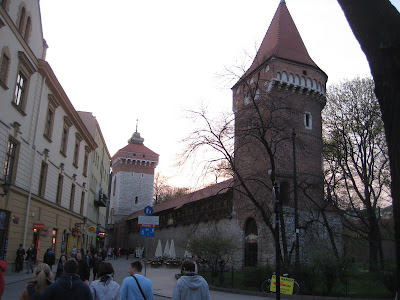 On this night we ate in a medieval restaurant.  The food was ok and the atmosphere interesting!

The day after the camps we went into the town square.  I shopped (new shoes! and a few skirts!) and Harvey hung out!  He found art work he liked..... 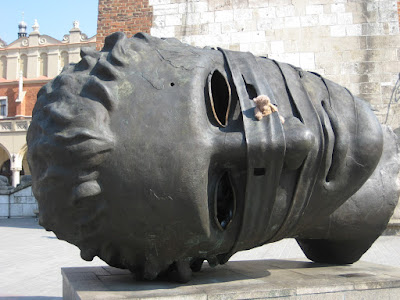 ...some pretty cool Easter decorations (no he decided he didn't want his photo taken here that deer was too big and scary!) 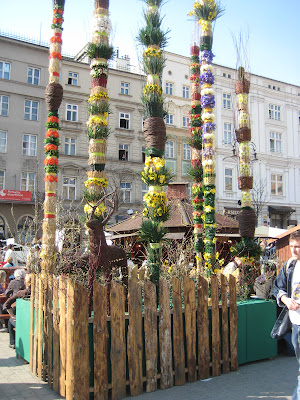 ... but had to have it taken with his new friends they may have been big but they weren't scary!! 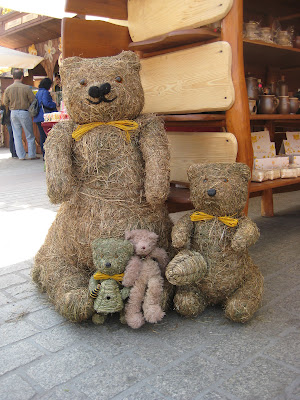 We saw some wonderful buildings.... 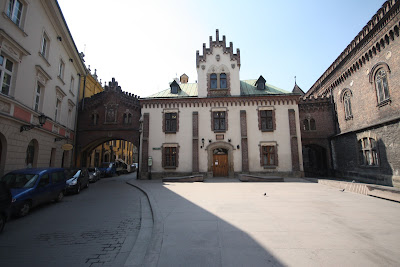 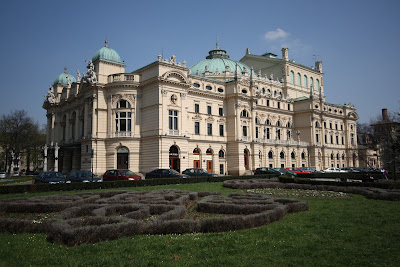 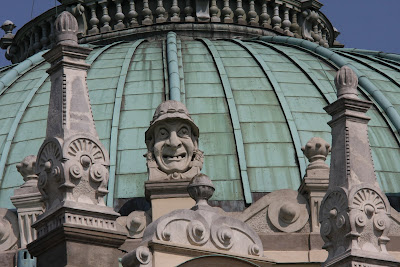 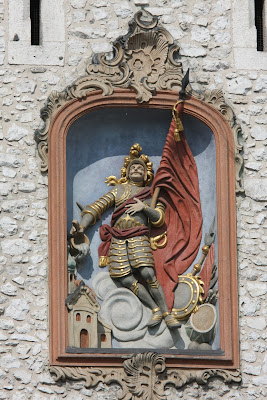 and wondered how long this little guy has been hanging out there! 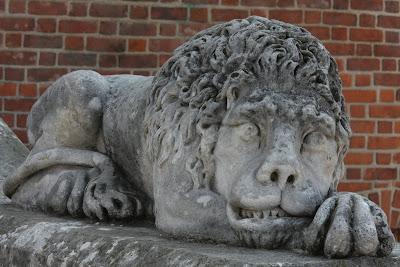 ...and Richard even managed to snap one photo of me that is OK!  Believe me they are few and far between!﻿ 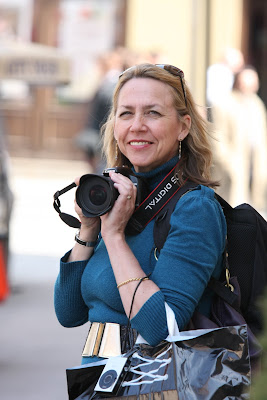 I used to do a KLIMT exercise... we would look at lots of Klimt, (some are not sutiable of course), especially any of the ones with gold and lots of patterns... then they had to collect a face and an arm with hand and glue them to a sheet of paper (A2 OR BIGGER). Then they would create patterns and shapes all over as they created the flowing gown or cape plus the background and forgound. All based around the face and arm.... I would then give them intense coloured inks, paints , papers, etc. I always had lots of gold paper (an adult class I took once we used gold leaf)and intensely coloured patterned papers. I would also ask them to collage from magazines and newspapers to add contrast. They were always so beautiful...
I use the artists Marc and Schiele in my lino printing unit called "agony and ectasy"... mmm I'd love to see them in real life too... I just like to be with you doing all these galleries is what I would like to do!

I've just realised that I have been ranting and raving away in a large number of responses to you, but they have not been published. The sign in thingy is on the next page and hiden with bloddy advertising, I had to scroll over to find it.... damn!

Sorry Coralie! Not sure if I can do anything about the set up but do love getting your responses! I would just love to do some of those classes with you and yes I find myself wishing you were with me when I wander around the galleries! I know how much you would love it and I know how much I would love listening to you and talking with you about all the things we would see. It am sure I just walk past things that I could learn so much from if only I knew where and how to look and see! Can't wait for a day in the gallery in Brisbane with you later this year. We have a date OK!

Hi Ali
Harvey looks a bit overwhelmed at his new friends. and i just love the photo of you. If it's not a power tool in your hand, it's a camera!!! Jx