A Day with Gaugin

Yesterday I had the most delightful day visiting the Gaugin exhibition at the Tate Modern.  I thoroughly enjoyed myself.  I spent over four hours there and read everything on offer.  I never knew that he was living with Vincent Van Gogh when the ear incident happened!  He was a bit of a wild man to say the least!  There were letters there to his poor wife.  I think if I had been in her shoes I would have wanted to clobber him!  But given all that he was a very talented man.  His paintings were just a small part of his talents.  He also did wood carving and sculpture....absolutely stunning even if at times a bit macabre!


After I left there I decided to wander back to London Bridge underground station and on the way there came upon the Borough Market.  I didn't even know it was there!  It was quite magical.  It was about 3:45 in the afternoon and getting dark...winter solstice and the shortest day of the year yesterday!  I had to take a few photos to try to capture the atmosphere....but of course you can't hear the stall holders calling, so it is by no means a complete capture.  There were quite a few people bustling around and the smell of mulled wine in the air...yum!  That's what the people have in the cups in the first photo! 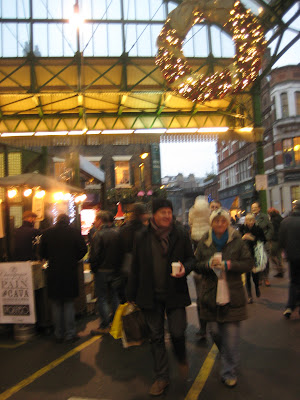 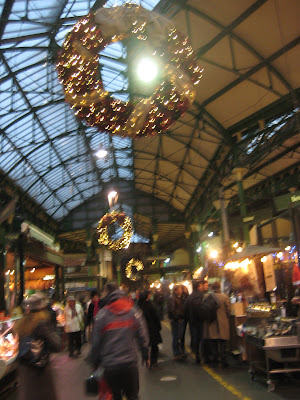 This is one of the flower shops in the market place.  It is just gorgeous with boxes of pine cones and dried fruits for table decorations.﻿  This is at about 4:00pm and as you can see it is quite dark.  There is a very high roof overhead, so no snow lying around....I suspect they would have cleared if there had have been anyway!
﻿ 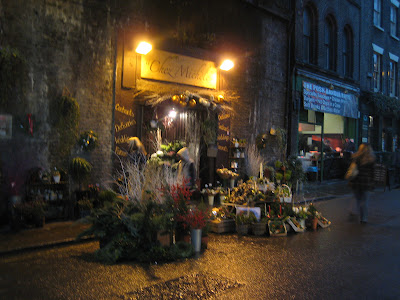 Out and about is quite treacherous at the moment!  Lots of hard packed ice on the ground.  According to the forecasts we are not due to have anymore snow in the next week, so we may not have a white Christmas as such!  I am hoping that the airports stay open for me to fly out on the 28th!
As I had not blogged for so long I have not filled you in on all the concerts we have been to! We went to Simply Red the other night and they were brilliant!  Andrea Bocelli was wonderful as were Supertramp.  Van Morrison was great although disappointingly short!  We have also seen 'Wicked' ﻿which was brilliant - just love the twists on the 'Wizard of Oz' theme, 'Yes Minister' -ok but a bit too long, Ross Noble - he's a mad man!  We went to 'Oliver' and them I took the kids from school to see it as well.  We loved it as did the kids.  It was brilliant watching their reactions to the live theatre.  One of my students part the way through said 'Ali, you know Fagin in the movie, is his real name Fagin?' My response, 'No Darl' then drew the comment 'So Oliver's name is not Oliver either?' ....'No Darl'  .....'Ohhh!'  It was very cute!  I am sure I am forgetting some!  We have been having a fabulous time!
Hopefully I will get back on before Christmas day!  If not I would like to wish you all a fabulous Christmas.....sorry did not get around to posting cards .....as usual!  Much love Ali and Richard. XXXXX
Posted by Ali at 5:32 pm

Merry Christmas Alison and Richard... mulled wine...mmmmm... must make that one day again soon. Hugh Fernley-Wittingstal made it on one of his River Cottage shows a few years ago, so I copied his recipe and made it for a party. Quite nice if I remember rightly! That market looks great. I hear the calling, the noise and the chaos of christmas markets. Much like Vic Market I guess, is a way, but different!
wet again today.. Very humid... 90%. I am cooking the beef, I've made the sushi, made the slowed roasted tomatoe and eggplant salad, the potatoe salad and prepared the fish kebabs. The pav is made too! banana and walnut muffins are cooling and I'm about to make the shortbread. The quail is ready to bake tomorrow, enjoy your day, we will have a drink to your health... write again soon... love Coralie

Hi Ali
that's sounds like such a lovely outing. haven't you had a fantastic year, even if you only look at the concerts and shows you have been to, wow!
Merry Christmas to you and Richard. i hope you have a special day together. and if i don't write before the 29th?, have the best ever time in Paris. Hervey must be v excited. to Ash and Adrian if you're reading, love to you both and your loved ones. also to Sam and Jade and Harry, much love.
Jane (and family) xxxxxxxxO