We have just got back from a very exciting shopping expedition!  Luckily Richard said we should not worry about getting too much today, just the essentials as getting home may not be too easy.  We had decided to leave Bruce in the garage and take the bus because there was some snow on the ground and it was snowing as we left home........good decision as you will see!
We caught the bus up to the main shopping area near us, Muswell Hill, bought a few odds and ends and then caught another bus to the local Tesco.  Richard's concern that getting into the carpark may be difficult proved to be well founded.  We were there about an hour getting a few bits and bats and by the time we came out the world was well white.  With our bags in hand we trudged across to the bus stop and waited!  The trees nearby caught my attention so I just had to take a quick snap. 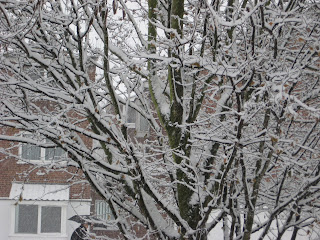 Then there was the matter of the request from my friend Jane for photos of my winter wardrobe! This was taken while we waited for the bus to come and after Richard had taken it a Kenyan man asked us to take a photo of him in the snow.  We then had a discussion about our joint lack of experience with the snow and the thrill of seeing it.  He is supposed to be heading back to Kenya tonight.....I am guessing the weather there will be somewhat different!

After about 15 minutes a bus came along.  It was not the right bus, but it was a bus!  It would get us back up to the top of Muswell Hill at least.  As we had no idea how long it would take for one of the buses that would get us all the way home to come we decided to jump on.....another good decision!  The bus ground its way up to Muswell Hill and then we got out.  This was what we found. 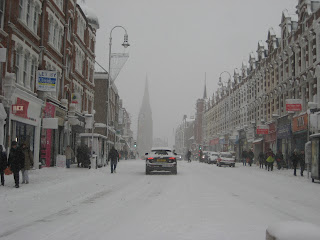 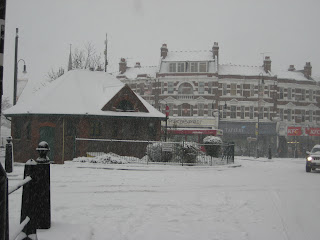 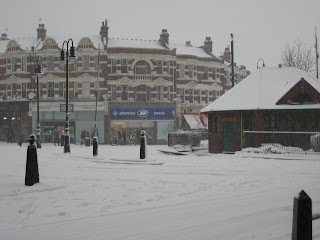 In the time it had taken us to shop the Hill had transformed into a winter wonderland.  It looked so beautiful, but very little traffic was now getting through!  So we decided to walk home from there....another good decision!

As we walked through the main shopping centre it became more obvious that the snow was having an impact.  These photos were taken outside one of the lovely gift shops and cafes in Muswell Hill.  The cafe is called the Crocodile Cafe .....check out the snow on the poor croc's head in the third photo! 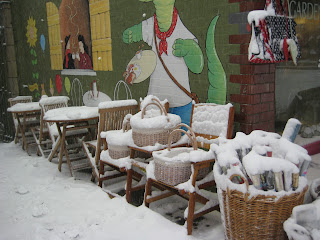 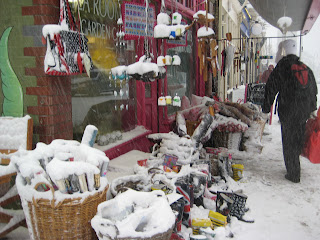 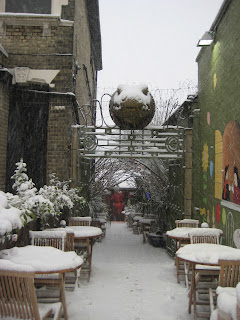 Up to the next roundabout and here was the view. 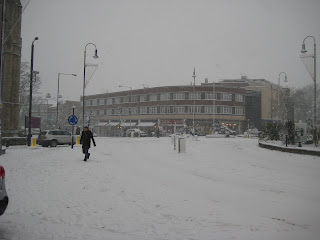 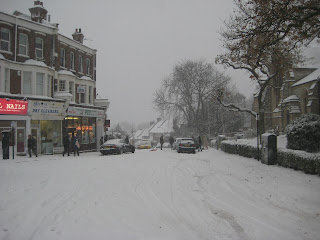 As we walked down the hill towards home the view of the intrepid British postman amused me! 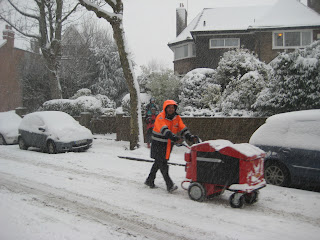 ...and then there were the inevitable children building a snowman﻿! 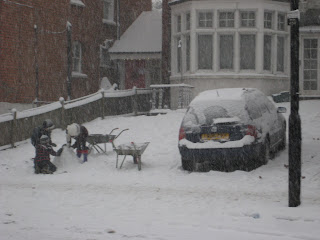 As we moved further down the road and came closer to home, we came upon this: 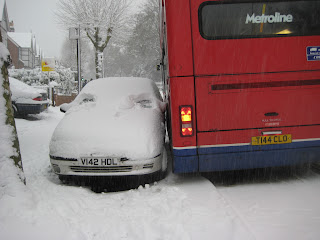 Luckily the bus had not hit the car but there was only millimetres in it.  I think that neither the bus nor car are going anywhere for a while!

As we got closer to home we realised that nobody is going anywhere much on Muswell Hill Road today. 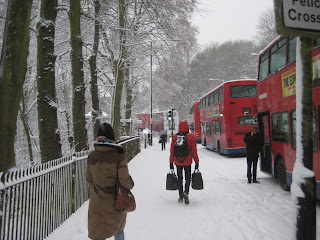 That's Richard carrying the two bags with the backpack and red coat on.  Look at the line up of buses! 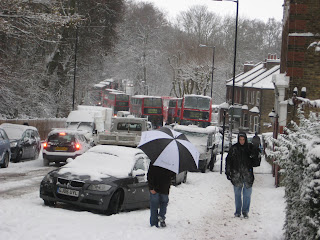 ﻿....and this is the view back down the hill from home.


It is still chaotic out the front of our house with people out of cars trying to push them up the hill and the buses still just sitting and waiting it out.  Tonight we are meant to be going to a Simply Red concert on the other side of town.  We should be able to get there without too many problems on the underground....but that may end up being another adventure!  Who knows.


....and finally here I am, finally home, looking the picture of winter elegance with the chaos behind me! 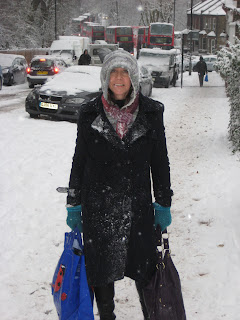 Hi Ali
what a joy to see you've blogged again. more tears of joy as I see you living the dream. wardrobe is great, not sure about the ladybug bag though, it clashed with your gloves a bit! what happens to all that stuff outside the shops that are getting covered with snow? i realise simple things from reading your blog, such as, 'well, i suppose you can't garden in winter'. things we take for granted here without the interference of snow. and how businesses must be so greatly affected by a harsh winter that keeps people at home. i actually think that bus has folded in the side mirror of that car. i wonder what the weather is like in Paris. you must be getting v excited.
thank you for this update, it's made me so happy, and i have just put one of these photos of you as the desktop background in my laptop. what i wouldn't give to spend just one day there with you. much love, Jane xx

Hi Jane, yes the mirror on the car was in. The weather will probably be similar in Paris. I am just hoping the snow has cleared by the 28th so I can fly out! I guess most of the stuff out the front of the shop was 'hardy' stuff! And finally nothing much grows although we....well I should say Richard is growing some bulbs indoors! Can't wait to spend a day with you again! XXXX

oohhh! excitement plus as I open your blog and you have written again.... its just wonderful; to be transported to your part of the world. Snowing in Victoria at present!amazing weather over here. The Mary is up because of all our rain! Sailing was interesting yesterday... we had a lovely dry window of about 2 hours only... race one was no wind and dry, race two started slow and then up came the wind and then the rain....so a quick sail to finish. We had our annual Christmas party at tin can last night... it rained all night. The carols were constantly competing with the rain on the tin roof! Just love your winter wardrobe... how many layers is that? more soon.....