We have had some issues with our internet here over the past week or so.  It has meant we have been without internet and more importantly phone, several times since getting back from Paris and when we have had service it has been extremely slow.  It is working at the moment, fingers crossed it will continue to do so!

My last couple of days in Paris were as delightful as the first few.  Richard arrived there on New Year's Eve, so by the time I got back to the hotel from the last day of my art retreat he was waiting for me.  After settling in he ducked out to get a bottle of Champagne for us to welcome the New Year in with.   He returned it to our room and put it in the 'fridge' to chill! 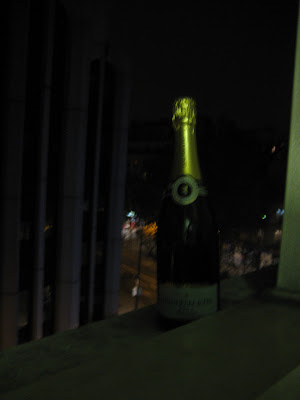 We  relaxed in our room for a while and then at about 8:00pm went to the area we had stayed in when we went to Paris together in 2007.  We decided to go there to have dinner as we had loved it on that visit.  It was lovely to return to the Ternes area and have a look around again.  At about 11:00 we then made our way with with many, many other people to the Trocadero to welcome the New Year with a back drop of the Eiffel Tower.  We were not sure whether or not to expect fireworks because we had seen some webs sites saying there would be and others saying there would not! We were hopeful when we arrived as there must have been hundreds of thousands of people gathered.  But alas, there were none.  It seems they all gathered for the comraderie and the lights twinkling on the Tower. 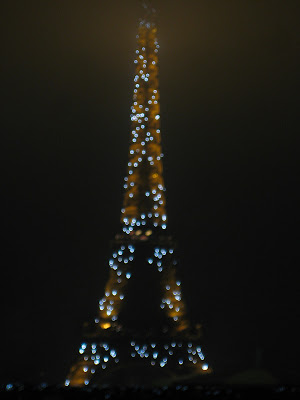 We did pop our Champagne, which was well chilled and toasted in 2011! 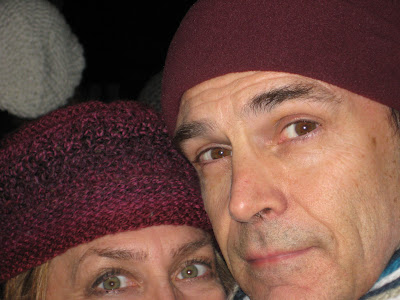 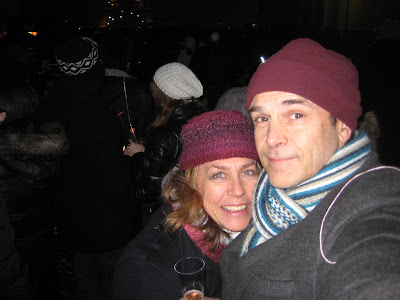 Our next attampt......that's a bit better.  You can see the champagne glass (well plastic cup) and those lights on the top of the photo just left of centre are the lights twinkling on the Eiffel Tower.  (Note my knitted hat and scarf....hand made by moi!)

We finished our champange and waited for the crowd to clear a little and walked from the Trocadero down to the tower.  On the lower level of the Trocadero we stopped to take some more photos. 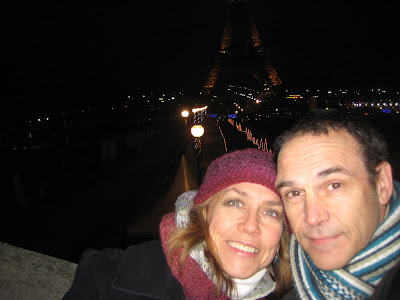 By 1:00am we had made it down to near the base of the Tower and it all started again!  New Year Greenwich Mean Time!

After we had walked under the tower we started to try to find a train home.  We crossed the Seine only for Richard to see a very drunk girl fall down some stairs and me being me, had to check she was OK.  She was not, so then the problem of language and getting help!  Some dramas and some time later we got a paramedic and left him to it!  OK we continued to walk to discover that the Metro being open all night did not mean all stations were open all night!  There was nothing so sensible as a sign at the closed stations saying the nearest open station is at.....  Oh no!  We walked and walked.  Saw many VERY drunk people.  Saw fights!  Saw many people vomiting, but still enjoyed our walking and chatting through Paris!  We eventually made it back to our hotel room at about 3:00am!  Poor Richard, not a night person, was snoring before his head hit the pillow.  I then had a chat to Ash online!

New Year's Day was wonderful, but I might post this now and will try to get a post up about the Rodin gallery tomorrow!  See you all later.....dinner time here and it smells delicious!
Posted by Ali at 7:20 pm

what a wonderful way to put in a New Years Eve.... pity about drunks and accidents and vomiting etc.... but at the Eiffel Tower for a New Years Eve. Ours was a Tin Can Bay... nice... fireworks and good food and a few drinks.
Very heavy rainfall of up to 322mm has been recorded in the upper Mary catchment in the 24 hours to 5am Monday. Major flood levels are rising at Dagun Pocket with major flood levels expected at Gympie during Monday. Upstream of Dagun Pocket, minor to major levels are easing although rainfall is expected to continue through today so renewed rises are possible. At 5:30am Monday, the Mary River at Gympie was 16.1 metres with moderate flood levels. Further rises above the major flood level of 17 metres will occur this morning continuing to above 20 metres overnight. Higher levels are possible with the forecast of further heavy rainfall.Major flooding continues between Miva and the Barrage and in Tinana Creek at Teddington Weir. Major flooding will continue between Miva and the Barrage during the next few days.
Gypie mainstreet is being flooded as I write. expecting 20 meters or more. We have gone down a bit. Our river here has gone from 30 meters wide to 200 meters wide... at a guess.... next rise expected tonight or tomorrow....

you have such positive oriented friends..... wow! always so cheery and happy! what a blessing... even their comments make me smile

Hi Ali
it must have been a special moment when you arrived back at your hotel to find your husband waiting there for you. love it.
I wonder why there were no fireworks at your end. plenty here at home, although i have to say that as great as it is for people to go out and enjoy new year celebrations, it makes me sick to think of the $$$ spent on the fireworks. our country is in an absolute flood crisis (today Maryborough and Gympie in big trouble - Bruce highway cut north and south of Gympie) that i really think some of that money could have easily been better spent on helping people. I must be getting old hey! Thanks for reading my blog, glad you like it. Love to you both, Jane xx