Our final two days were New Year's Day and January 2nd.  We slept in on New Year's Day as we had not been able to get back to our hotel room after welcoming the New Year, until about 3:30am.  When we woke we went to Montmartre and had something to eat and a bit of a wander around.  It is an absolutely beautiful area of Paris with lots of galleries and quirky shops.  But alas, the only things open were the cemetery and the cafes and restaurants!  We ate in one of the cafes and had a chat to a young Aussie guy on the table beside us.  We seemed to be meeting a lot of Aussies as we moved around Paris.
After eating we went for a short stroll around the cemetery - I had it in my head that it was where Jim Morrison's grave was .....wrong!  Anyway we both reaffirmed that we find cemeteries horrid places and the massive headstones and memorials are disgusting!  Some of the bigger structures looked like old country dunnies to me!  Anyway we were quite tired and didn't stay out too late.  We went back to our hotel for a while had a rest and then went out to dinner at the restaurant I had drawn and eaten in previously. 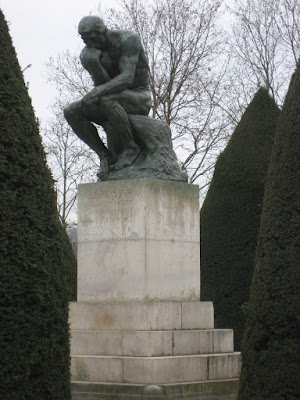 On the 2nd we went to the  Musee Rodin in Paris and I have to say it was wonderful!  I was astounded by the beuaty of some his work and enthralled by the idea that he uses some of his images time and again.  For example the are several versions of 'The Thinker' in a range of sizes, including the massive one in the garden of the museum.  The figure is also part of his 'Gates of Hell' below (he is in the centre of the the top section). 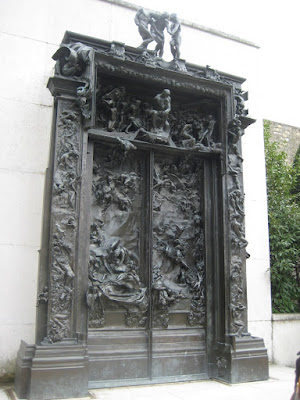 'The Burghers of Calais' was another favourite.....I love all the different poses and expressions and the Museum had a room where quite a few of Rodin's working figures were on display.  It was fascinating to see the way his work progressed from an idea to the final product.  It would be great for kids to see that even these masters had to work hard to achieve the levels of brilliance they did in their lifetimes. 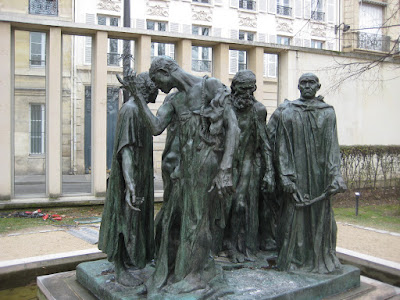 ﻿I also love the sculpture called 'Sleep'.  This the the first form.  He did a final I think in marble, but for me this was the one I preferred!  I just love her face. 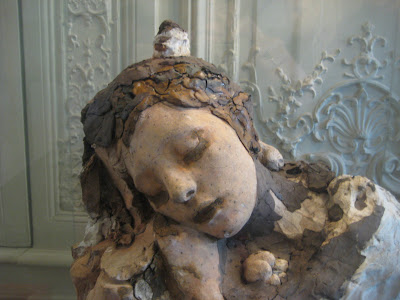 The other theme I really liked were the sculptures of hands.  There was the simplicity of this one called 'The Cathedral':...... 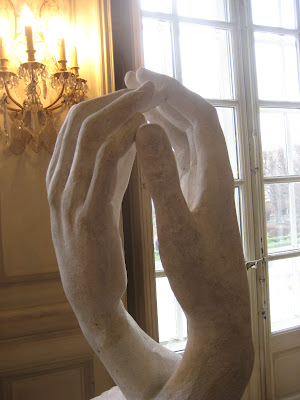 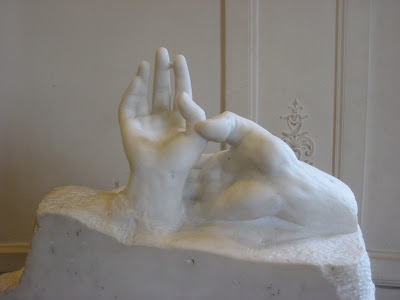 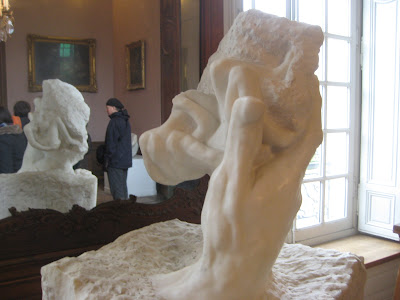 The lovers, 'Paolo and Francesca' were breathtaking! 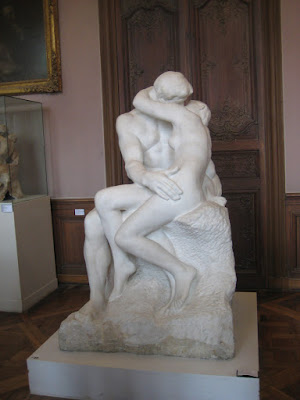 There were so many others that were wonderful.  I think I have discovered sculpture now!  What will the theme of my life here in Europe have been.....learning, learning, learning about art!
Posted by Ali at 10:29 pm

ahhhhhhh! Rodin! those hands are delightful. To be able to stand so close and see the marks made in the stone... to see the progression of ideas from inception to completion... wow! I try very hard to show my students that all artists work through the design process, that no artists just wakes up and creates a masterpiece.... Oh, wow! I will have to save up and visit this one!

Mary back to normal now. Lamington Bridge due to open today with speed restrictions because railing are missing and they just have big blocks in place.Floods in Victoria now! School start Thursday! I'm not ready...........................

Hi Ali
I love the "sleep" too in it's form you photographed. 'I would love to see you sculpt! when you come home, you are going to have to build that studio out in the big backyard. Make it really big, so friends can come and 'craft' with you.
J xx