We are well into winter here now.  The days are slightly warmer than they were a few weeks ago and getting longer again although I have been told it may get colder again.   I catch two buses to get to work each day, and have to walk around a roundabout and down a bit of a hill between the first and the second bus.  About a week ago I was on my way to work and this is the sight I was greeted with as I started down the hill. 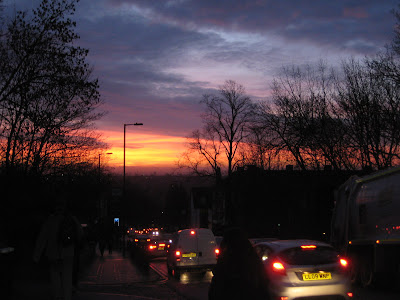 The sunrise was simply stunning and I had to stop and take a quick photo.  I am sure when the Londoners are rushing past me stopping to take photos,  they wonder what on earth I am on!  The morning was cold, but still.  The colours were a lot more intense than they appear here, but even at this level they are beautiful.

Richard has been growing us a little bit of spring recently.  We are just starting to reap the rewards of his efforts with these beautiful hyacinths and amaryllis.  There is one more amaryllis planted but it hasn't done much so far.  I guess there is still hope though because the bulb still looks reasonably healthy. 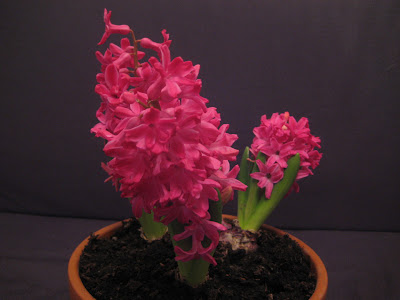 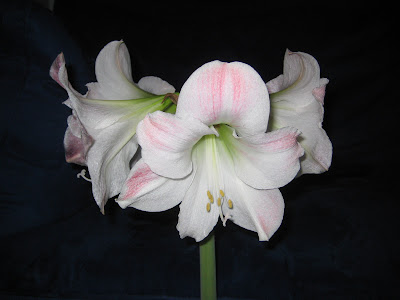 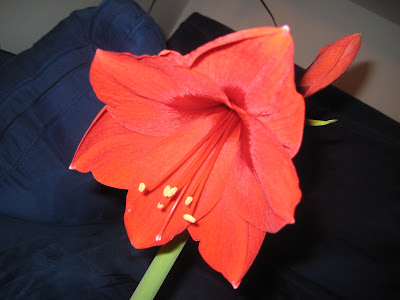 When Richard saw my last post he said I had missed the Rodin he had liked most.....so here she is now: 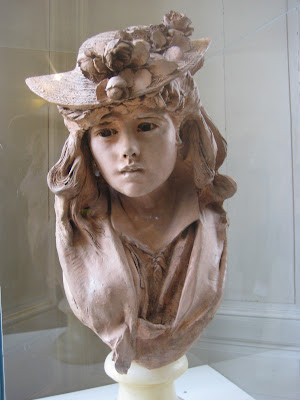 Her name is ﻿Rose Beuret in Straw Hat and she is very beautiful!  I had a lot of problems reducing to just a few images.  I took many photos of the faces he sculpted so that I could try to draw them later.  So as I do not have too much to add, I will add a few more photos to finish this entry!
Sorry about the first photo.  He was in a glass case and impossible to get a good photo of with the light and his position in the room!  I decided to add him here anyway because it shows you Rodin's early work: 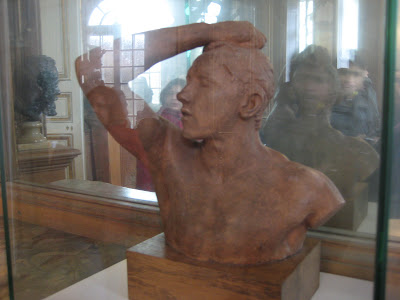 ﻿
...followed by the final piece based on that work! 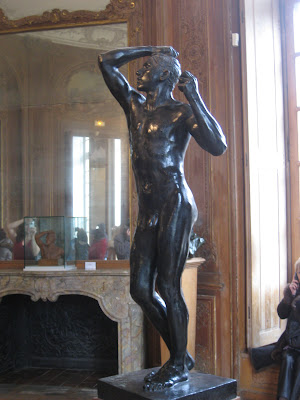 ...stunning isn't he!  Now look at him closer!  So beautiful! 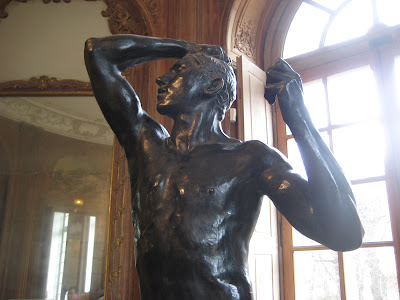 This piece, out in the grounds was stunning!﻿ 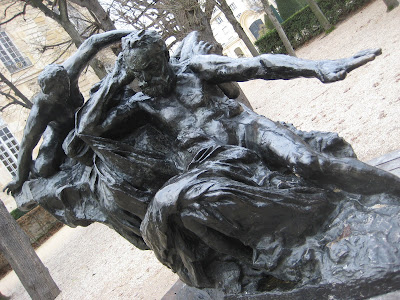 my canon died last week... so Im now cameraless.... back at school yesterday... meetings and time for preparation... it was nice. Lots of talk about the Aldridge Way... high expectations etc... so that was good. I didn't hear much 'anti Aldridge way' so that was quite pleasant.... I am off to a Botanical Drawing workshop in feb... looking forward to it too.... its too long between drawing sessions lately.
love Rodin...

Oh how I would hate it if my beloved Canon died! What a horrible thought to be cameraless!

Sounds promising to have a strong 'Aldridge Way' ethic! Ah botanical drawing! It was where my journey started. Only lasted a few weeks, gave me an inkling that I could in fact get a reasonable interpretation down on to paper, but then life got in the way for quite a few years! Now the drawing bug has well and truly bitten again and I am drawing several times a week at the moment. The results are varied, but I can see some improvement. In some ways I would love to wind back the clock and take this artistic journey a lot sooner....but I guess the question is would I appreciate it and accept my efforts as I am doing now? I think maybe I need all these years of life experience to do that and love the journey rather than the destination! I would love to see the results of your woekshop! XXX

investigating new cameras at present... may have to wait until tax return time... cameraless is a tad hard!
...for a great number of students I have taught over the years I have found that they inevitably go back to their art, and they enjoy telling me too. For example...I had a facebook message from a past student the other day who told me that after being a chef for 9 or so years she was looking for some new direction and decided to buy a camera... all the things I taught her came back to her and she even found her old photography VAD and read all her notes (my notes)... she started a business doing portraits and weddings etc... gave up cooking! other students over the years have gone back to their artistic bent and I discover them at various workshops, galleries etc...so Alison, you have simply come back to it... it never really left you, but you needed to do other things first... just like I need to teach to provide for my family before I really explore the possibilities of my ability to be a professional artist, you needed to explore all those other things you did before coming back... does that make sense. You know I could create and explore art (drawing, printing, glass, pottery, photography etc etc etc), garden, be with my cats and be the happiest person alive... thats heaven to me!

Coralie, I wish I could say I was 'coming back to it', but the truth is as a child I was squashed before I started. Oh how I wish I had had an art teacher like you and someone I could send a message to now telling them how much they had meant to me! What a blessing and a reminder of what a great job you do! Can't wait to hear what your choice of camera is mine is a 450D and Richard's a 40D. Mine's lighter but not as professional as Richard's. He just said there are newer models out. I love, love, love mine!

And by the way....I love your idea of heaven! When we are old and retired we can play together!