This weekend has been a busy one!  Yesterday I went into Southbank here in London and met up with a group of women who have all done the online experimental art course I did last September.  Amelia who runs the courses organised the get together and it was a great day.  We met for coffee and then lunch and then we followed that up with an experimantal activity with our cameras.  The idea was to walk for 5 minutes and then start taking photos.  You are meant to take one photo every minute for 36 minutes.....mmm!  Somehow I found it quite difficult to be so disciplined!  I am sure I took more than 36 photos and the intervals between them were very varied.  Not to worry I had a lot of fun doing it and got some interesting photos!


This is the group getting ready to go out and start shooting! 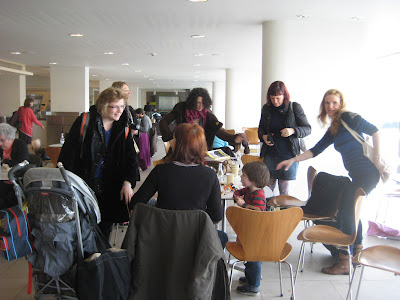 Loved this photo of the London Eye! 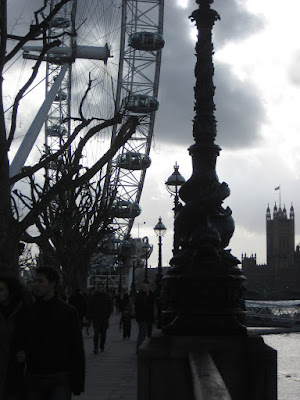 ...and this one I caught of Donald Duck lighting up a smoke.....somehow ruined the image of what Donald should be! 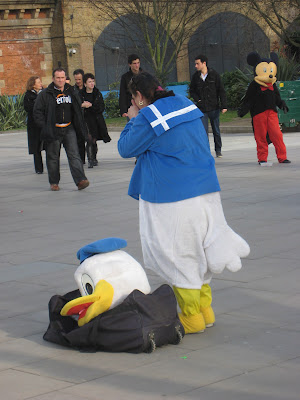 I love how moody this shot is! 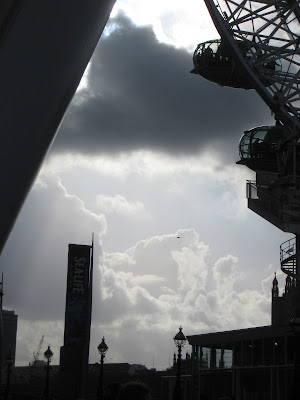 The Valentines display on one of the support structures for the Eye. 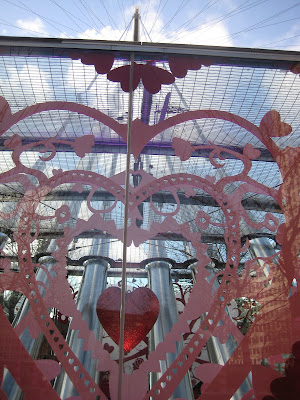 Part of the Queen's Walk along the Thames. 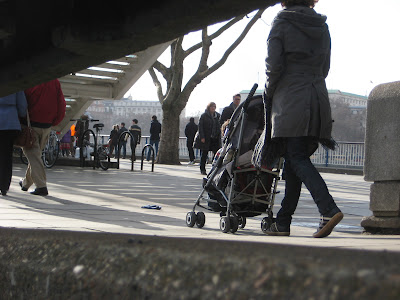 A section of  a sculpture. 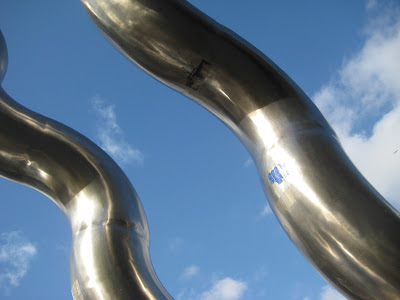 Part of a display of kids art work all about their brain. The display was really interesting and provided some food for thought for me with respect to my art classes at school! 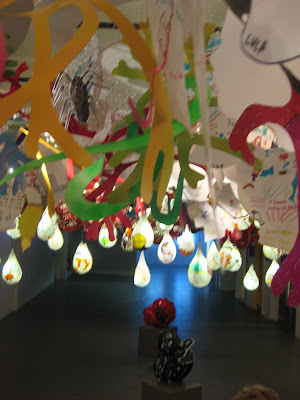 A close up of some rose hips taken with the macro! 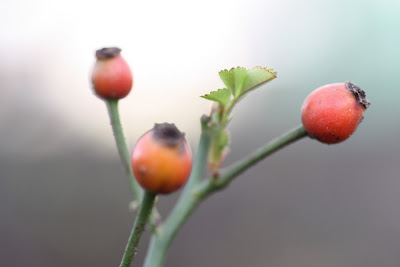 There is a story there.  I meant to take the lens from Richard's camera for my good camera, but grabbed the macro instead!  So most of the photos above were taken with the point and shoot!  Not to worry it still worked out ok!  I had lots of fun and really enjoyed meeting the others!  After chatting to one of the other ladies I have been inspired to learn about Photoshop so have put it onto my computer today and will hopefully start doing something about learning how to use it it the near future!
Last night Sam left to come back to Australia.  He has been over here since the end of November.  Some of the time he has been travelling but quite a large chunk of the time he has been with us.  The house will seem quiet and yes we will miss him, but it is also nice to have our little house back to ourselves again.  The house is only a two bedroom place and so is crowded when we have extras here.﻿  We have loved having all of our visitors and would love to see even more of our friends and family!
Today we headed off out, not really knowing where we were going.  En route I suggested we have a look around South Bank together so we went to Waterloo Station and walked down there.  We wandered along the Queen's and then across the Westminster Bridge.  We then wandered towards the Houses of Parliament and Big Ben (or as my darling aspie husband would say 'the tower that houses the bell called Big Ben') ....got to be accurate you know!  We spotted Westminster Abbey and decided to see if it was open...no...but St Margaret's was so we had a look in there.  It has gorgeous stained glass in some of the windows, but not so wonderful in others as they were destroyed in the bombing of London!  Sorry no photos for two reasons....number one they ask you not to take them, and number two even if I could have, I had left my camera at home!
Anyway, after wandering through the church and seeing the memorial plaques for some famous people including Sir Walter Raleigh we headed off again with no particular idea of where we were going!  London is so brilliant because there is so much to see!  After a few minutes we wandered past the 'Cabinet War Museum' and decided to go in.  It is the underground museum where Churchill and the war cabinet ran things during WW2.  It was excellent and, in my view, well worth the visit.  Just an interesting note ...I spotted that the clocks in there said the time was 4:59!
The centre also has the 'Churchill Museum' as part of it and this was a fascinating exhibition of the life of Winston Churchill.  What an interesting character he was!  I never realised that in his spare time he loved to paint and did so with a reasonable level of expertise!  He also tried sculpting but did not keep it up because he apparently found it too messy!  We sat and watched film of his funeral parade through London.  Richard said he remembered it happening when he was a child.  Even after all this time it was actually very moving to see.  It reminded me of Diana's funeral in that the crowds were silent as the cortage moved along the road.  Somehow I felt the same awe at how silent large crowds of people can be when they are moved by the gravity of the situation and the sense of community mourning.
Wandering back to the underground it was cold and raining lightly.  We have had some warmer weather lately and have even been up into double figures, so I guess we were not as rugged up as we should have been.  We are meant to be heading into some cooler days again!  We decided to head home to the warmth and to cook dinner (well at least Richard cooked dinner) a bit earlier than normal.  We had eaten and tidied up by 7:30 ...very early for us!