Start of Spring Half Term Break

I have had a fabulous start to my Spring Half Term Break!  On Friday night we went to the theatre in the West End and saw a play called 'The Rivals'.﻿  It starred Penelope Keith and was fabulous.  It is apparently a fairly old play and was very clever and very well done.
Saturday saw me doing more drawing, including an attempt to draw my Papa....not much of a likeness, but I guess I will need to keep practicing. 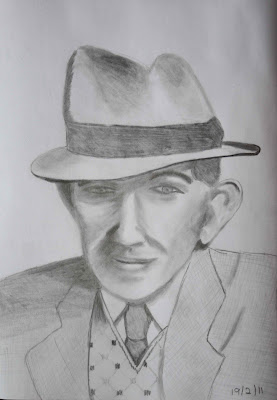 On Sunday we went to the football.  It was a knockout match for two of the teams in the﻿ last 16 for the FA Cup final.  We saw Fulham defeated by Bolton by one goal to nil.  It was lots of fun, but feezing cold.  It had been drizzling when we got there and even though our seats were supposed to be undercover we were getting wet.  Thankfully it stopped fairly soon after we arrived, so we only had to contend with it being cold, not cold and wet!  By the end of sitting for two hours my toes literally felt like ice blocks.  I have to say I was pleased when the game was over.  I managed to take some short video bites of the Bolton crowd (I tried to include the video but it wouldn't work!) as they reacted at different points throughout the game.  Unfortunately there is not a huge amount of footage as I was running out of both memory and battery.  I still say the most entertaining part of the soccer is the crowd reaction and participation.
On Monday I stayed home for most of the day and tried to draw a self portrait.  Again it is not brilliant, but at least I can see some resemblance in this one! 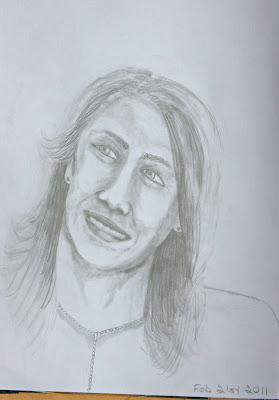 It is really hard to get decent scans or photos of these pencil drawings so I played with this one a little in photoshop.  It is a better representation than it was, but still not great.

Yesterday I went and did some shopping and today I went into the middle of London to go shopping.  I bought myself a little set of pan water colours so that I can start playing with them too!

Tomorrow we are off to Athens for three nights.  Hopefully there will be no more riots there!!! I willl be taking my computer and will blog from there if we have time and I have the energy!
Posted by Ali at 2:00 am

Hi Ali
you are really developing your talent, congratulations. Here's cheers to you dearest friend as you celebrate your birthday. i hope your time in Athens is very special. much love, Jane xxxx

Thanks Jane, I am loving the journey! Thanks for your birthday wishes. Athens has been wonderful. Have journaled each day and will blog when I get home and have a more reliable internet connection. Love to you too. XXXX