It has been a busy weekend for me.  I have had a few days off work at the end of last week, after catching another bug from my students.  I have caught so many since being here!  Not sure if it is different bugs in the UK or the fact that I am teaching younger children and they have a tendency to sneeze and cough all over you more than teenagers!  Anyway the result was three days home in bed and then a decision to have a laid back weekend to give my body time to get over it all.

Yesterday Richard was out for the most of the day with his last game of the hockey season and then the dinner with the boys for the final night.  I had a very peaceful day, firstly getting the housework and some washing done and then enjoying myself.

I spent about an hour and a half playing the saxophone yesterday.  I bought the sheet music for Leonard Cohen's song 'Hallelujah'.  I can play the first bit reasonably and will continue to work on it!  The hard thing is getting back to the sax after having played the recorder daily for the past few months!  I had to look up a couple of the notes because I was confusing them with playing the same notes on the recorder.  Just a gentle reminder that I need to practice more!

After the sax I decided to spend some time drawing.  I found an activity in Carla Sonheim's book 'Drawing Lab for Mixed Media Artists' and drew the following: 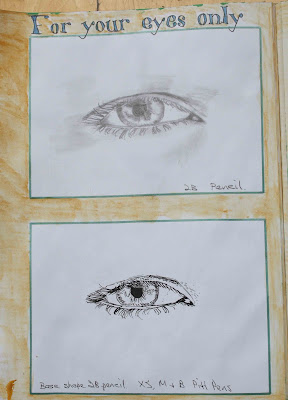 There is a photo of an eye in the book and the task is to draw it using four different media.  The first one in pencil only, the second and subsequent drawings you do a basic outline in pencil and then use pen to finish one (the second one above).  I used three different thicknesses of Pitt Pens. 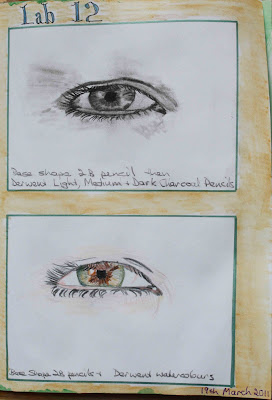 The third drawing was finished with charcoal.  I used Derwent charcoal pencils in light, medium and dark.  I also used a drawing stub to help with the shading!  The final drawing was finished off using Derwent watercolour pencils.  I had so much fun doing these!  I have continued to paint and draw for much of the weekend and have really enjoyed it.  I have finally added a lot of the bits and pieces from Paris into journal pages.  It is amazing what you find when you tidy your desk!  Now there are just the ones from Greece to sort!

While I have been doing all my art lately, Richard has often found himself at a loose end.  He decided a couple of months ago to get himself a 'project' to work on.  Today he finally finished and we went to the woods across the road to take it for a spin! 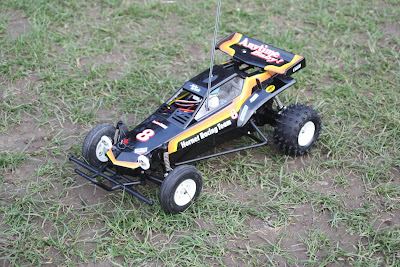 So this is his new toy.  He made it from a kit and it is a remote control 2WD buggy. 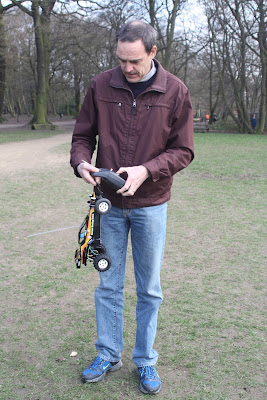 This is Richard making sure he knows what the controls do!  I thought he was being overly cautious given that we were on a field and well how could it be a problem in such a big space!  However once he got it going I fully understood his caution.  It goes incredibly fast! 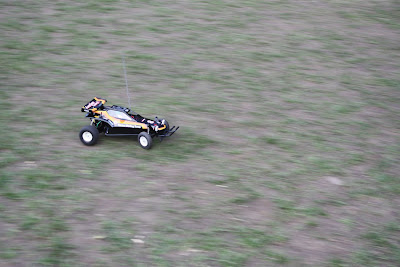 The blur of the ground in this photo may give you some idea of just how fast! 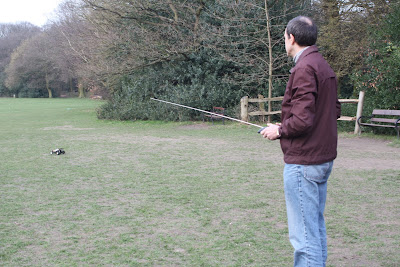 ... and it can move quite some distance away from the operator!  It tried to go off the 'course' and into those shrubs on the right at one point! 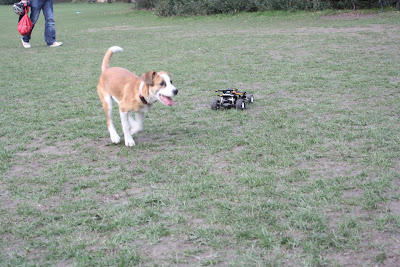 .... and quite a few local dogs thought they would try to catch it...no chance!  The children were trying when I was driving it so no photos of them!  One toddler stood beside me and kept saying 'it's gone, all gone now!' 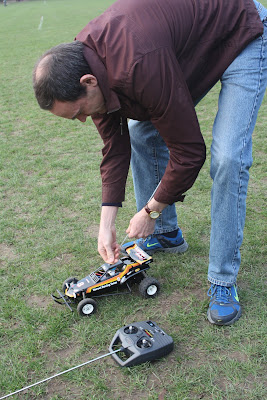 Like all off road vehicles when they are pushed...it needed some running repairs.  The tubing that holds the aerial wire came off  and needed to be refitted!

So I guess for a quiet weekend we still packed quite a bit in.  Only three weeks to go and I will be at the end of another school term.  We are off on another European road trip and I can't wait.  Australia really does need to look at the length of its school terms!!
Posted by Ali at 9:36 pm