Seven years ago today I nervously walked into the the park at Southbank in Brisbane to meet the man who would become my darling husband just seventeen short months later.  I have to say, it was one of the days that I now look back on, and know is a pivotal moment in my life.  Never did I guess that day, how much my life could and would change!

This morning we set off from London, bright and sparky at 8:00am.  We drove down to the Eurostar Train Tunnel at Folkstone.  As we were driving down to the platform I looked up and saw this on the side of the hill.... 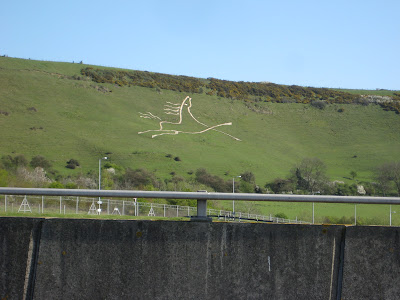 There are a quite a few hillside decorations like this around the UK.  Not sure what this one is about, but I did like him!
Anyway, off we went down on to Platform 4 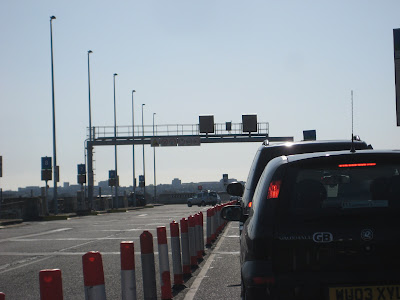 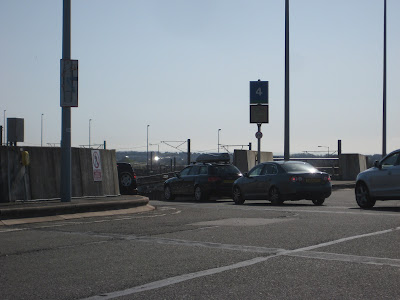 ...and eventually we all disappeared into the middle of the train! 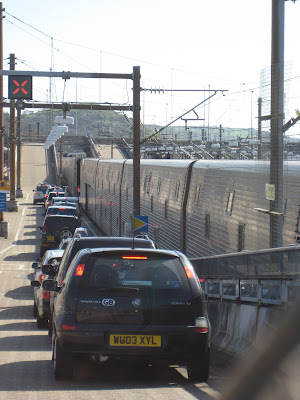 ...it's hard to take a photo when the car is moving and the light's not great....but I do think this looks cool anyway! 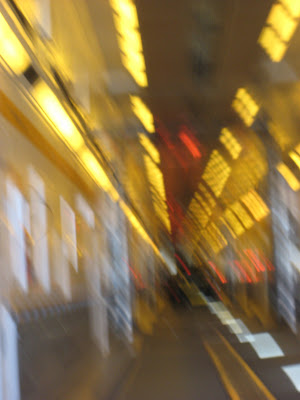 ﻿On the Eurostar you sit in your car for the whole journey.  Nothing to see so I finished reading Elizabeth Gilbert's 'Committment'.  I have to say I thought it was great.  It was all about marriage and the history of marriage.  It was really very thought provoking.  I really want Richard to read it so we can talk about it.
Anyway the drive from the Eurostar to Cologne was all on motorways.  We drove straight through and it only took us just over four hours to get here.  We found our hotel very easily thanks to our sat nav, Portia.  She coped well with the roads here as there were no tunnels once we left Calais, and no roundabouts.
Once we settled in our room we walked up the road a short way and jumped on a tram.  Sorry forgot to get a photo, as a Melbourne girl it didn't even dawn on me until after it was too dark!  We went into the middle of Cologne.  It was quite busy and the shops were still open until about 8:00pm on a Saturday night.  We didn't really look in too many (just a couple of shoe shops!).  We walked around and saw this tower: 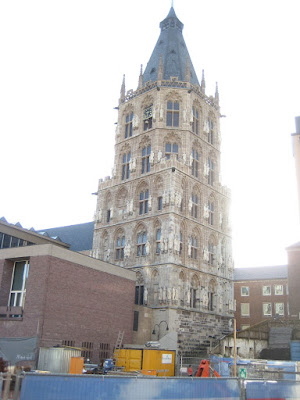 There was a heap of construction going on around it so I couldn't find out what it was, but I just loved the detail which doesn't show up brilliantly in this photo!

A bit further around we came upon the Cologne Cathedral.  It is absolutely huge and stunningly intricate!
These first two photos are a parts of one side and still are not the whole thing!  Check out the size of the people in front of it and it will give you some idea of the scale of it! 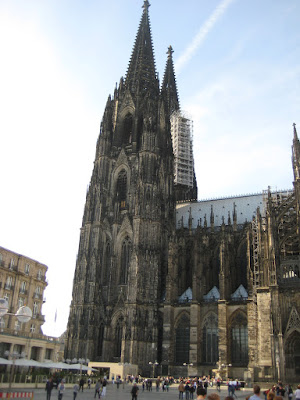 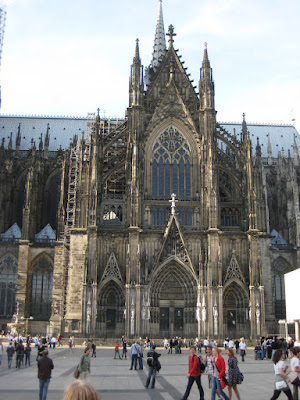 This next photo is the front of it and just one of the spires (your can see a small part of the second one on the left of the photo).  I only had my little point and shoot camera with me and without the wide angle lens that was all I was able to get a decent photo of!  This photo was in fact taken part of the way down the street opposite so that I could get the height of that spire in, but the other spire was then obscured by the buildings in the street. 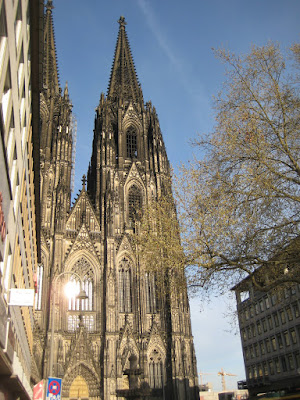 We have been fortunate today with the weather.  It has been a glorious Spring day, sun shining and high teens.  I think tonight is going to get cold because there is no cloud cover.  Tomorrow were are off to Prague where we are staying three nights.  Here's hoping the weather stays as it is for a while.  We may have a challenge on our hands finding our way around....Portia does not cover Prague, but Richard has worked out the route to the hotel with his phone.  Keep your fingers crossed that we don't get too lost!!
Posted by Ali at 9:46 pm

wow !!!! Alison was great to look at your photo's, My brother lives in Cologne, I would love to get there one day....keeping on dreaming :-)

I remember that day you walked into Southbank. You were so excited and you still are. It has been a priveldge to see you 'grow' as a woman since you met the man of your dreams. Love you dear friend. Jane x