We arrived in Prague two nights ago.  It is a beautiful city in many ways.  The older part has cobbled streets, there are trams and there are lots and lots of fairy tale towers.


We arrived in Prague late on Sunday night after a resonably long drive from Cologne.  It sounds ridiculous but one of the hightlights on the way here was the fancy loos at one of our roadside stops.  The loos were in a service station and it cost 70 Euro cents!  It seems you have to pay at most of the loos at the roadside service stations!  When you got into the toilet the seat had a funny looking block on the back of the seat with a button beside...well what would you do?  I pushed it and the seat started turning around passing under the block.  It was a seat cleaner that meant the seat came out clean and dry.  I had to have another go ...just to make sure, you understand!  Anyway it turns out I didn't need to even do this in the first place because when I pushed the button when I had finished there was a repeat performance.  Then when I had washed my hands the paper towel was delivered precisely measured I am sure, at the push of a button too!  Richard wondered why I came out of the loo giggling!  The benefits of being a girl!!
Our first night in town, we caught a tram into the centre of the city. We wandered around not really knowing where we were going or what we were doing. We found Wencelslas Square, but I have to say thought at first it was just a wide street! Then wandered a bit further and saw the following alley way. 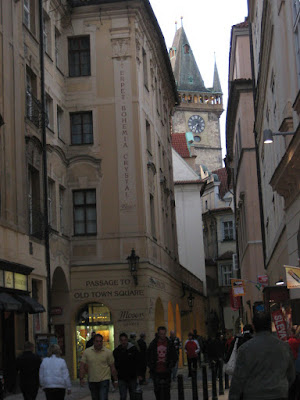 We decided to walk down it and see where it led.  The shop windows were all a glitter with the glass displays. 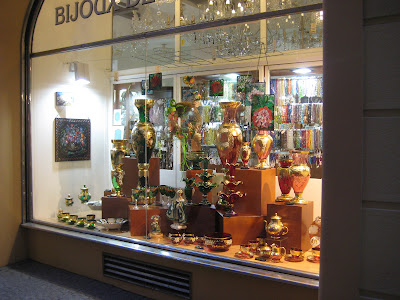 It led into the old town square which is really pretty.  There is this tower with the astronomical clock (not working and more photos later) 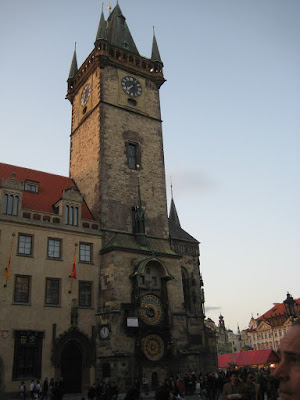 and this fairy tale double tower... 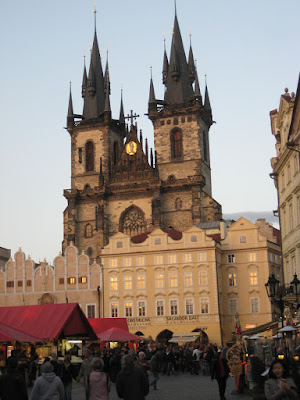 This band were putting on a free concert in the square
﻿ 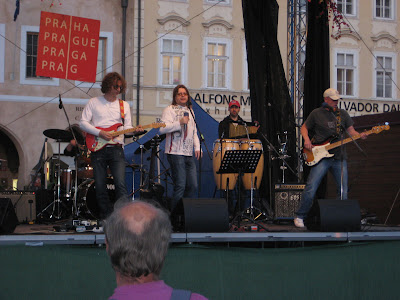 ..and then we went to this Jazz and Blues Club for dinner.... 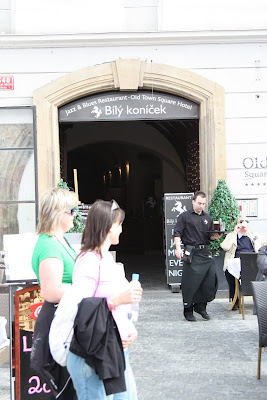 ...and listened to these guys play a heap of Ray Charles' music.  They were great and the guy on the saxophone could really, really play! 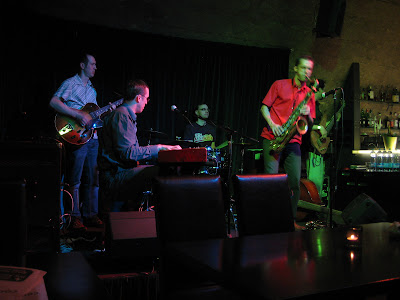 Yesterday we started the day by visiting a memorial to the victims of communism 'not only those who were jailed﻿ or executed but also those whose lives were ruined by totalitarian despotism'. 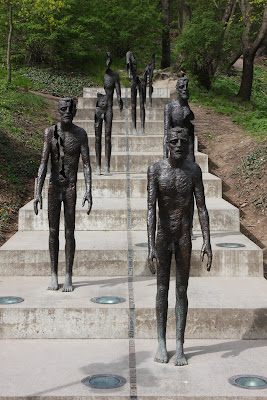 We then went up the funicular to Petrin Park 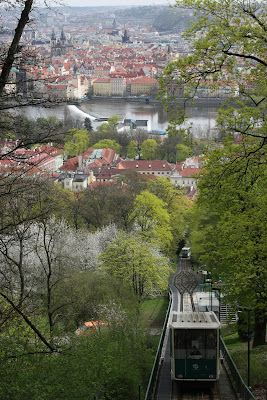 and while we were there we visited the Petrin Tower. 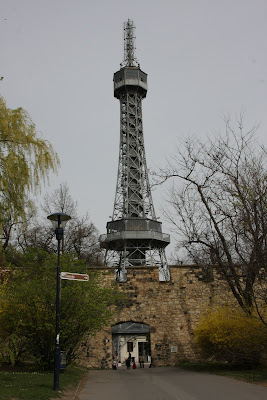 Harvey got this view from the top of the tower 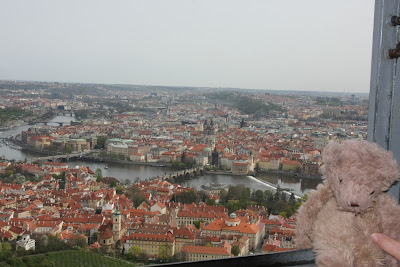 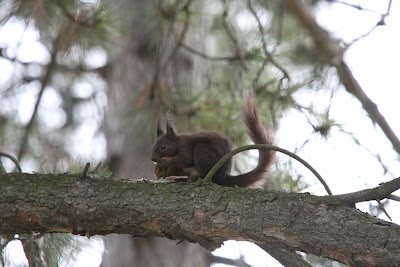 We then went back down the funicular and caught a tram into the city.  We decided to go back into the square and get some photos of the market area.
(I seem to be having problems downloading photos so I will publish this as is now and come back to add more later.  I still have lots more to add for Prague!!)
Posted by Ali at 4:04 pm

oops! I read Prague part 2 before Part 1. I see Hervey. By the way, i have a new little guy who is a resident of my new car. He's a rabbit, called Maleny! two guesses where he came from?! Jane x

Yep Harvey has enjoyed his travels again. He was however left home yesterday. We didn't think a bear needed to see the things we saw yesterday. You will see why when I write about it.