This week has been another very busy one.  Today is our youngest's 20th Birthday.  I can't believe that the little 12 year old boy I met when I started going out with Richard is 20 already!  Sam I hope you have had a fabulous day!

I have joined the gym and have started to try to get myself fit again!  I need to strengthen up and get my flexibility back!   I was there four times last week.....let's see if I can keep that up!  I also did a lot of creating throughout the week.  Here's just some of what I made: 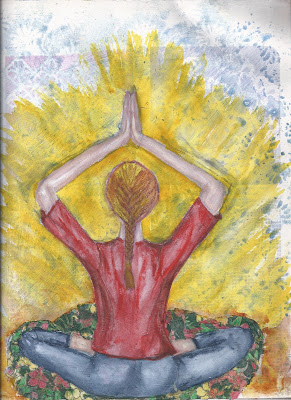 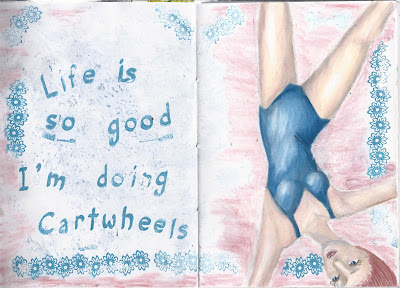 Do they say something about my moods this weeks...meditative and yet full of energy?  Well the second one was done as a sketch initially the right way up as I drew.  I then realised that my journal was upside down when I drew her so decided to try to make sense of her that way and this is what came along.  It was a huge challenge to try to get the shading and the highlights in the right places when I was thinking of her being upside down.  Let's just say an interesting challenge.

A couple of weeks ago we went to my friends' 10th Wedding Anniversary party in Maryborough.  It was a lovely evening held in their carport.  This little guy decided to gate crash. 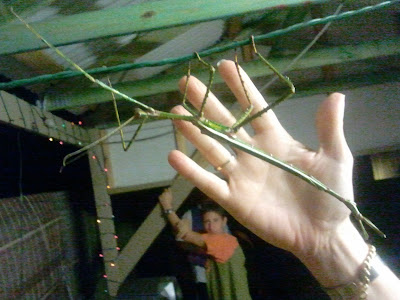 That's my hand behind him to give you some sense of scale.  I would say he had to be at least about 20 cm or 8 inches long!  I had to get a photo of him because my friend in London has some he keeps as pets and I thought Simon would just love to see this one!

There were more interlopers in my week!  On Friday I decided to do a little bit of gardening.  There was a Eucalypt seedling in the front garden that I decided needed to go so I reached across it and got the nastiest sting on my upper arm from this little guy!  I have no idea what sort of caterpillar he is but my goodness he packs a punch!  He stopped me in my tracks.  I needed to come in and put an icepack on the sting, take an antihistamine and sit down for a little while.  This morning I decided the price he needed to pay was to be my model while I played with the macro lens on my camera! 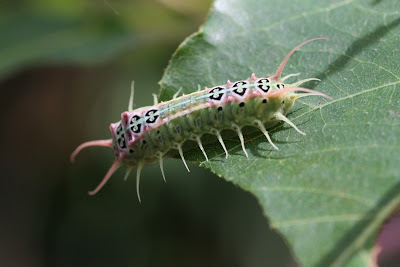 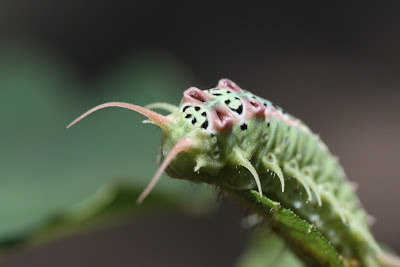 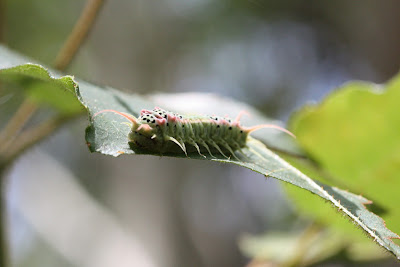 While I was out there I also spotted this chrysalis and decided he could model for me too! 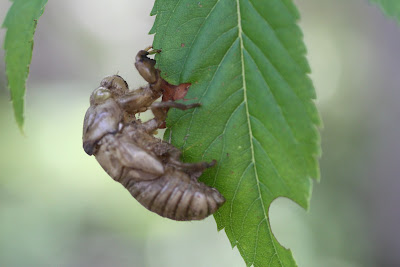 I think this next story though takes the cake for the week's excitement!  I was laying in bed reading last night (a real book, not my Kindle) and Richard decided he wanted to go to sleep.  I knew at one point I had a reading light on my bedside table so I decided to have a scout around for it.  Well I nearly jumped out of my socks....except I wasn't wearing any!  When I turned around there were two little eyes looking at me!  This is who they belonged to: 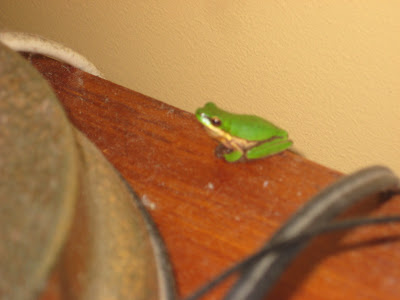 She is an Eastern Dwarf Tree Frog and is about 2.5cm long (I can fairly confidently say 'she' because the males only grow to about 2 cm).  She was sitting under my lamp I guess hoping to catch any bugs the light attracted. She is the third one we have had in our house since we have been home.  I keep catching them when I can and popping them back outside.  We have had so much rain lately (about 150 mm or 6 inches this month and we are only up to the 11th!) that I guess they think it is moist enough indoors for them!  I can hear them right now out in our garden....they are noisy little devils too!

Another joy I had this week was to go to watch Harry perform at a local retirement village.  His Kinda group were singing Christmas Carols there.  It was delightful and best of all was his comment when I asked him if he had had a good time.  His response.....'Oh yes Grandma!  I just love being on the stage!'  Oh he melts my heart!
Posted by Ali at 11:23 am

what a great update of your week. speaking of gym, i've been having thoughts in that direction again too. proud of you for doing it. 4times in one week!
you have well captured your energy levels in your art, i had to turn my laptop upside down to see the cartwheel lady standing up! what a nasty yet interesting looking caterpillar.
Gotta love Harry, he rocks!
I just know you are going to have a good week ahead. Jane x