We left Australia on Tuesday morning and flew to Singapore.  We stayed overnight in Singapore and visited the Night Safari which was absolutely wonderful.  The Safari has a train that goes all the way around and you are also able to walk the tracks to view the animals at your leisure.  The displays are very well set up with very unobtrusive fencing and keepers who call to the animals and throw them small treats to keep them alert and active.

Our flight to Siem Reap yesterday was pretty uneventful.  We had a short stop at Da Nang in Vietnam.  It was fascinating to see all the aircraft hangers and even fighter planes in them I would gather were from the war years.

We arrived in Cambodia in the late afternoon and the security to get in the country is quite interesting.  When we got off the plane we walked across the tarmac to the terminal.  Here we were met by someone checking our boarding pass from the plane - not sure how else we would have arrived at that door if we hadn't come off that plane given the number of bods watching as we walked across the tarmac! There were some people going on to Singapore so I guess they were making sure none of them tried to slip through.  After that we had three pages of documentation, including a passport photo and $20 US to had over for our visas.  On to the next counter where they give you back your passport with the newly attached visa and a piece of blue paper.  On to the next gate where you hand over the blue paper and voila you are now in Cambodia!

We were met outside by a tuk tuk driver from our accomodation.  We had decided that it was the easy way given we do not know the costs etc here.  I had photos but at this minute Richard is trying to download a file recovery program on his computer because the disk from my little camera appears to have decided to choose now to die!! (Yay he rescued the photos!!!) 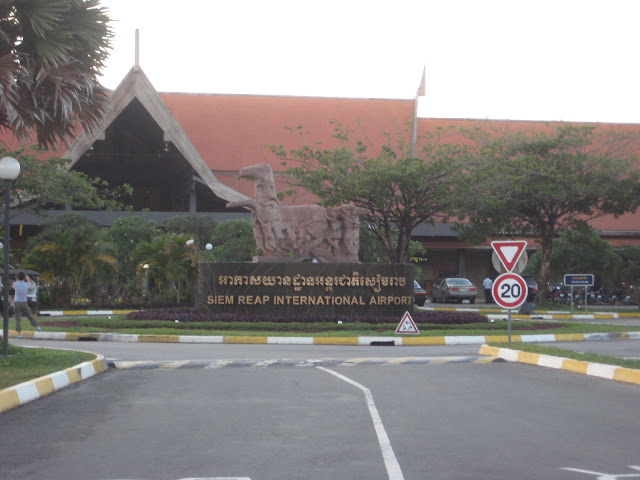 The trip from the airport was the usual asian craziness.  Motorbikes and scooters with seemingly impossible numbers of people on them.  Most of the people not wearing helmets, but in some cases the adults wore helmets and children did't. There were dogs and cows on the side of the road and the traffic was going chaotically every which way but still it all seemed to flow somehow. 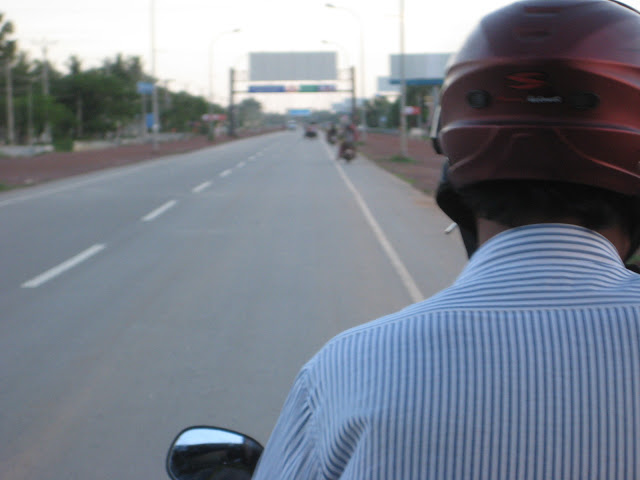 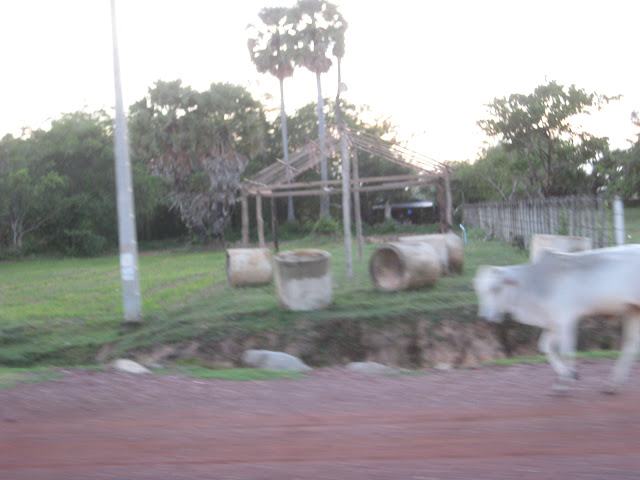 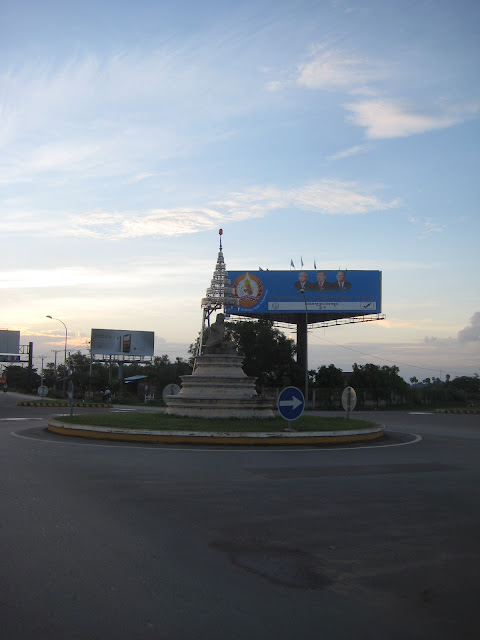 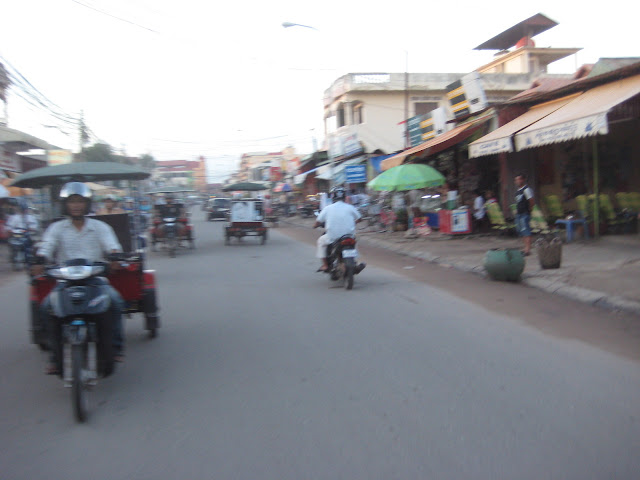 Our accommodation is lovely.  We are staying at a place called 'The Golden Banana' and somehow it reminds me a lot of the place were stayed at in Marakesh.  There is a pool in the middle of the building and our room is on the first floor.  The stairway to our room is very steep.  We were greeted with an iced lime tea...yum!  We only settled in for a few minutes before going out for dinner.  I have to say that we were not overly taken with the food last night.  We had spring rolls which were quite tasty and followed them with a curry (very, very mild) and a fish amok which was also quite boring.  I somehow expected the food to be spicy like Thai food.  I guess we will keep searching for something more exciting!

After dinner we decided to wander through one section of the night markets.  We were walking down the first aisle when we realised that the heavens had opened up and it was teaming down.  Within minutes areas of the markets were ankle deep in water and the stall owners were putting up sheeting to protect their wares.  In typical tropical style it had eased right off after a few minutes and we managed to make it back to our room without getting too drenched.  More impressively we managed to jump the puddles well enough that our shoes stayed relatively dry.

This morning after breakfast we went to the artisan's centre.  It is a place where they teach disadvantaged youth (18 to 25 year olds) to produce silk paintings, and make ornaments of painted timber , silver dipped, carved wood or carved stone for the local tourist industry.  It was fascinating and great to see them trying to provide a living for the local people.  The women who were doing the silk painting were all deaf and mute and were also being taught to communicate using sign language.  The guide who took us around started off as an apprentice wood carver and has gone on to study further and learn English so that he could be trained as a tour guide. 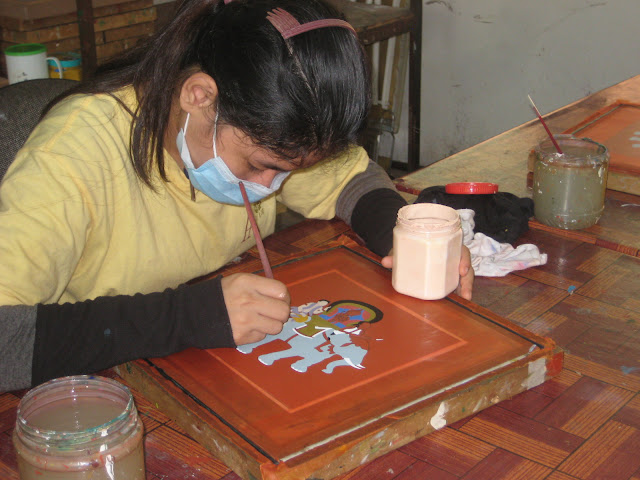 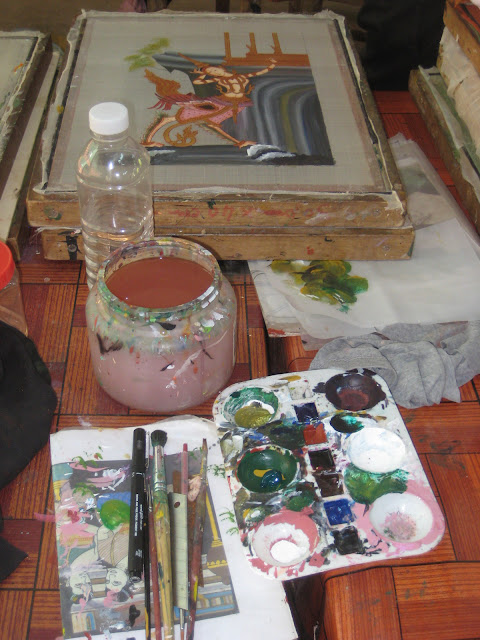 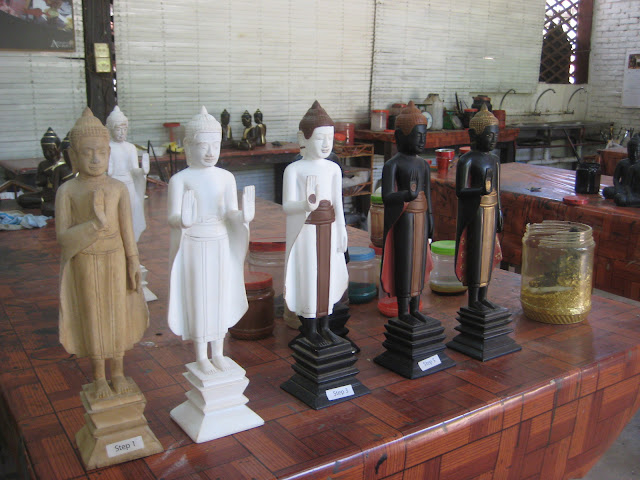 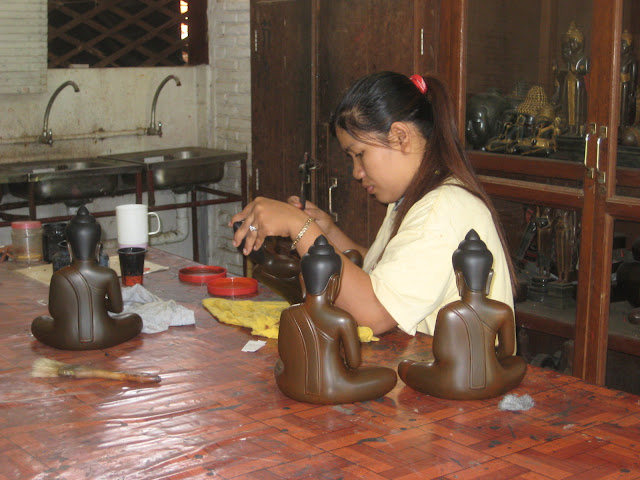 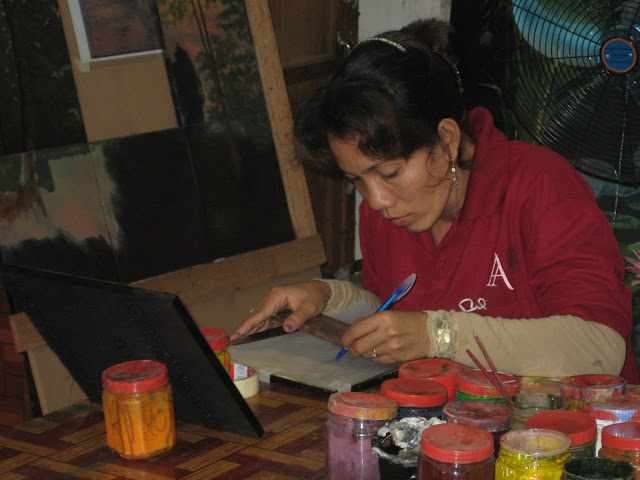 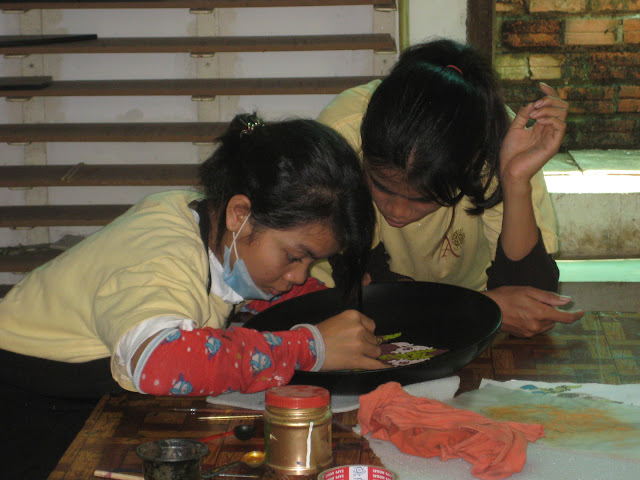 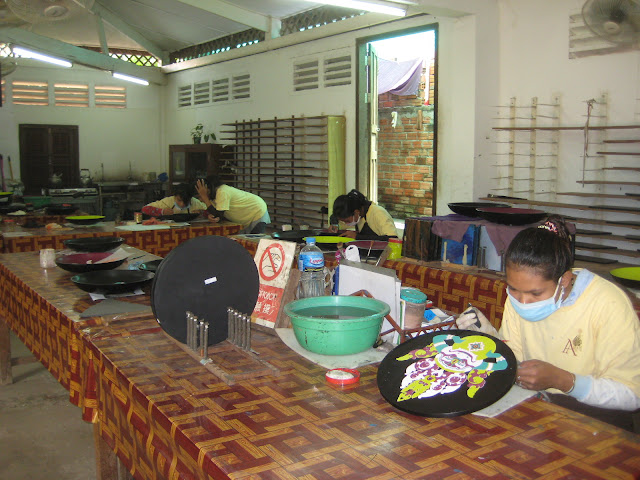 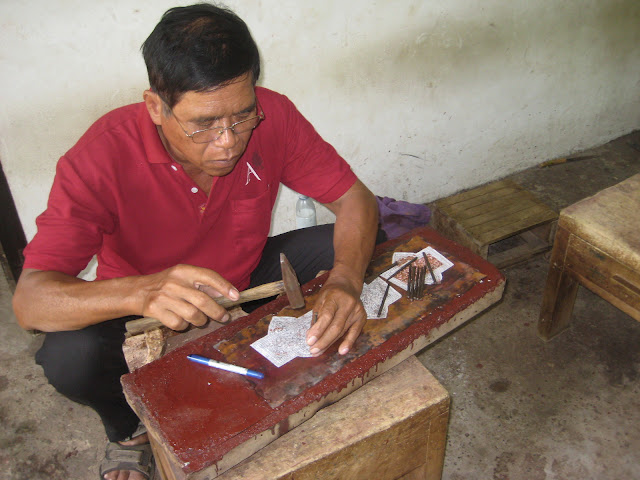 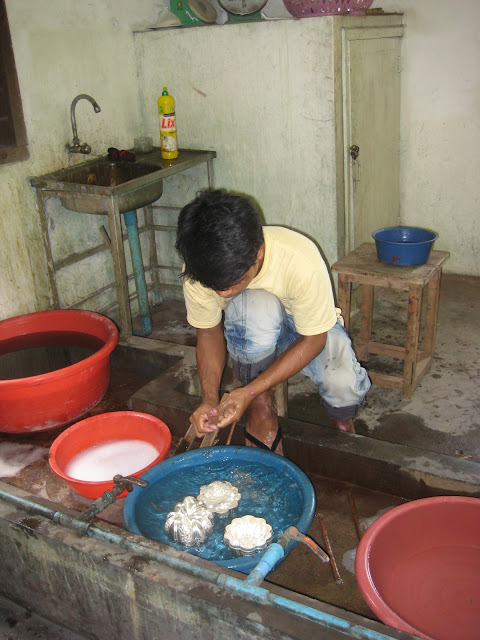 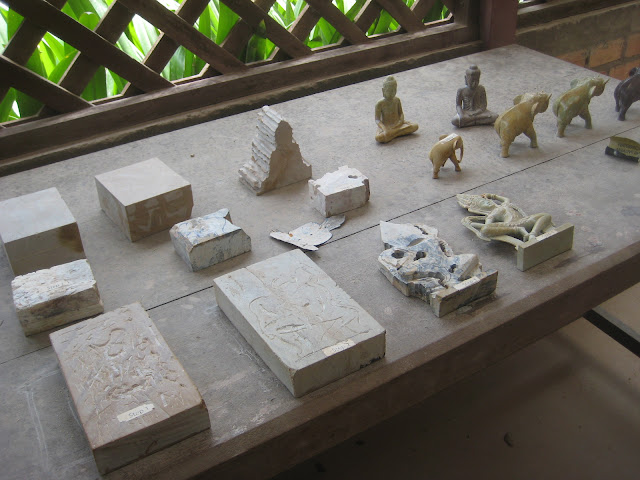 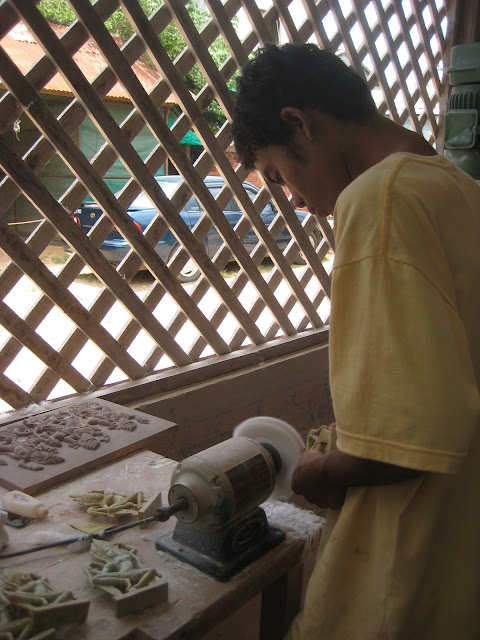 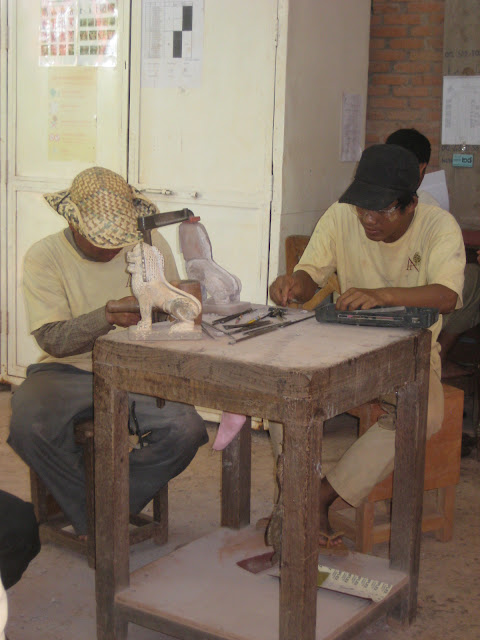 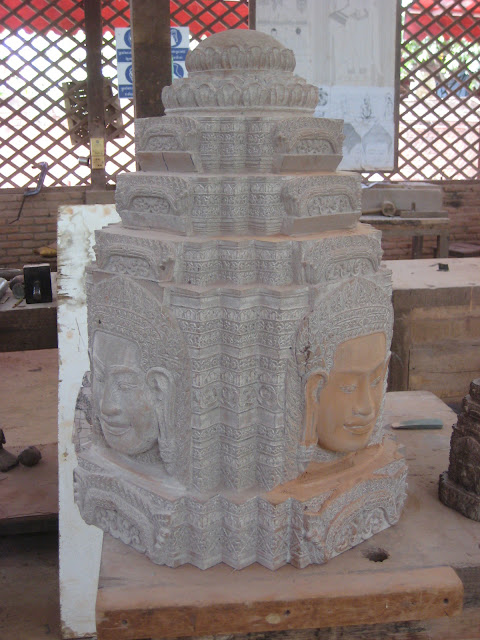 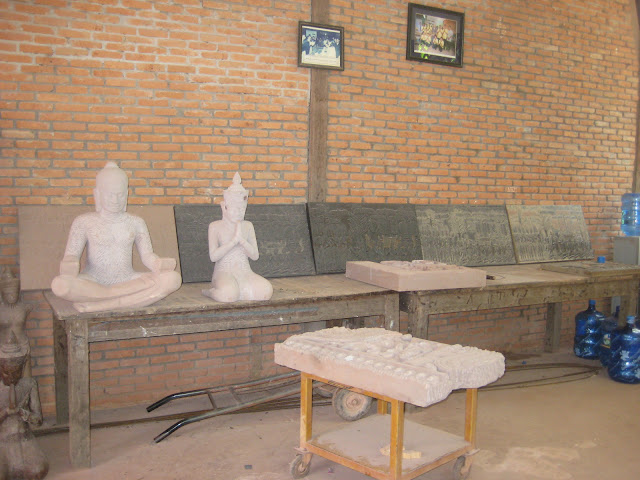 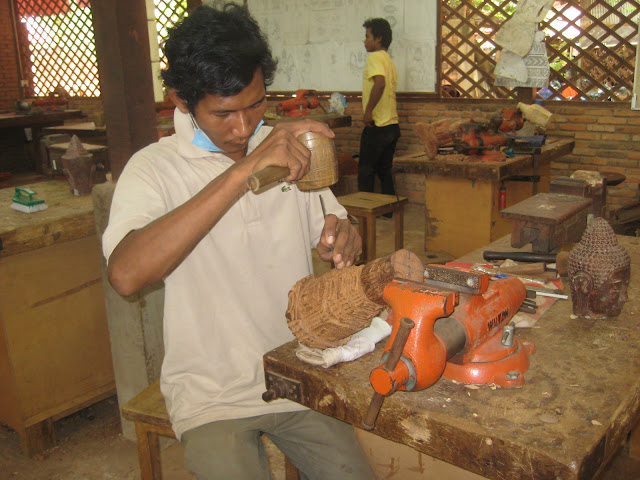 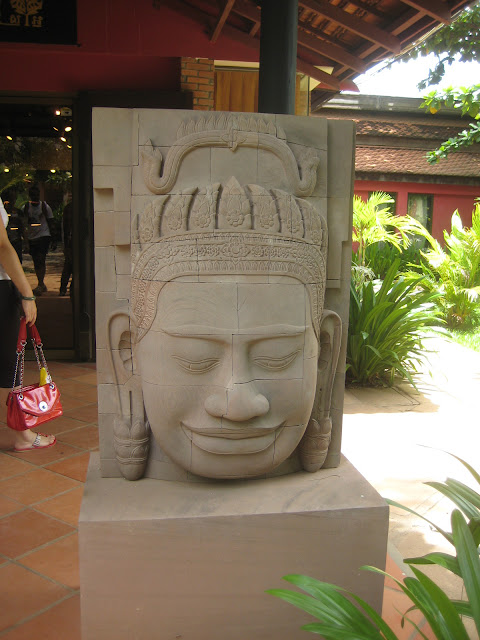 There are obviously many poor people here and many affected by the landmines.  We have encountered a few children begging on the street and one women who seemed to be sky high and told us to 'f*** off' when we said no to her request for money.

After visiting the artisan's centre we went for a bit of a wander around town and then sat at a bar called 'The Red Piano' on the corner of Pub Street and watched the world go by for a while.  Richard had a beer and I had a 'Tomb Raider' cocktail.  Apparently it was Angelina Jolie's favourite when she was here.  It was a cointreau, lime and soda.  Very yummy!!

These are some of the views from where we were sitting: 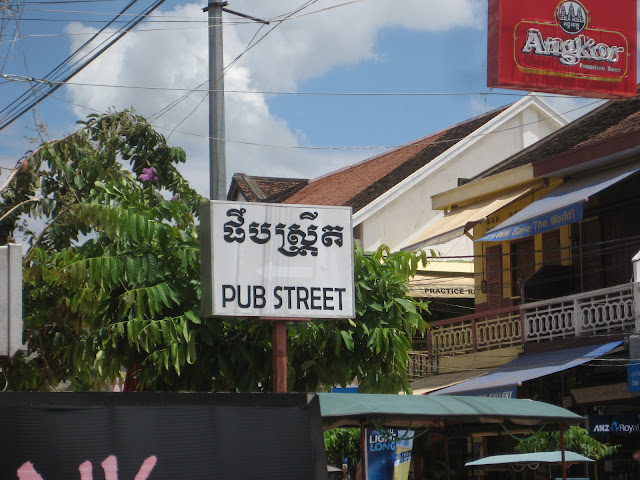 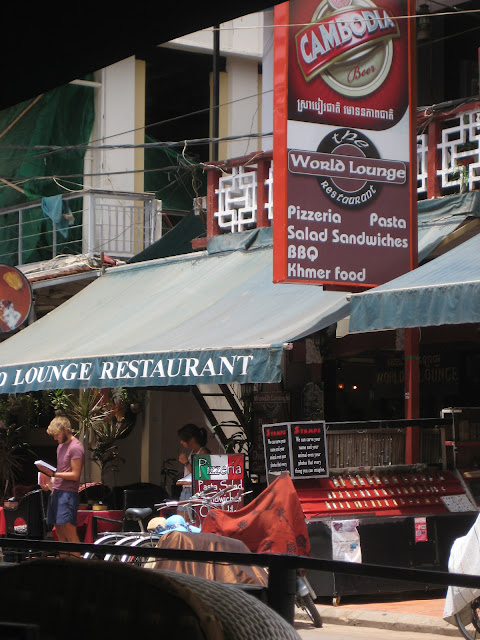 We decided to come back to our room and have a rest from the afternoon heat.  We had not long been in our room and the sky opened up again and down it poured!  It has stopped now and Richard has found a program that says it is recovering the photos.....we'll see.  I'll post this now and if we get those photos I will add some of them later.  We do have photos on Richard's camera we just don't have a card reader that is working!  So technology is defeating us....just be patient they will be worth the wait!! (I knew they would be!!!)

Ali, this all looks fascinating!!! The closest I am to Cambodia is that we have the only Cambodian Restaurant in the state right by our house. I'm currently quite addicted to their lunch buffet...

Sounds fabulous Ali... love the pics... hubby was in Cambodia late last year... and just loved it... will look forward to more photos...

Beautiful photos and art/craftwork. What a holiday to remember!