So now to the update on yesterday! We started the day in Killarney and had decided to tour around the Ring of Kerry going via Kenmare first. Firstly we went past these beautiful lakes (I think they are the Killarney Lakes). 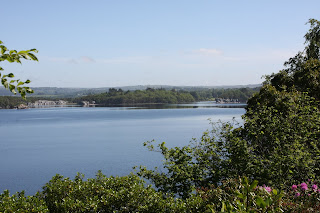 We made our way to a town called Kenmare with a stop over at Ladies View for this magnificent view of the Lakes. 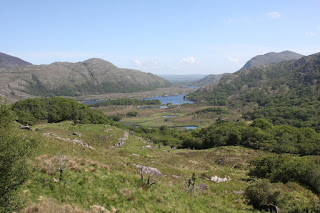 We arrived in Kenmare to find that it was local market day. A quick wander through the markets led to nothing more enticing than a few cheap second hand books. I grabbed those and we then decided to go for a quick wander through the town itself. As we wandered along the main street we came across a little music shop specialising in traditional instruments! Well I decided the bodhran I had already picked up was not big enough and that I needed to buy a full size one! Then the tin whistle in Eb spoke to me...after all I will be able to use my saxophone music for tunes!! So after less than a week in Ireland I now have two bodhrans and two whistles!! Just couldn't help myself. I think that poor Richard thinks I have lost the plot!!

OK retail therapy done we headed off to do the Ring of Kerry. Other than the first part of the road being closed due to road works and us needing to make a slight detour because of that, the day was gorgeous. The weather was the best we have seen so far (including today) and made for a lovely journey along the fabulous coast line and through the twisty mountainous areas. The views were spectacular (even Harvey thought so as can be clearly seen by the look on his face in this photo!) 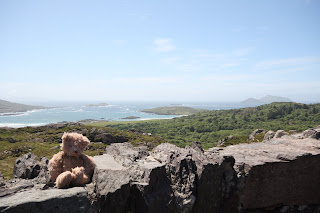 ...and here is another example of the beauty of it all. As you can see it was still a bit hazy so the photos do not do it justice. It is simply stunning. 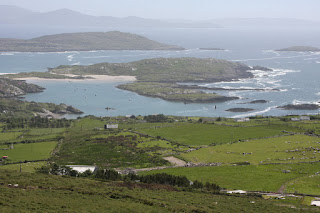 Once again we stopped at a small pub for lunch and just had a really relaxing day overall. It is a wonderful way to have a holiday....so very, very laid back.

Today we made our way to the Rock of Cashel. This is the place where St Patrick made some King or another a King and in the process stabbed him in the foot. St Pat was supposed to have laid his hands on the wound and healed it instantly and hence his beatification as a Saint! The Rock has an incredible history firstly as a political site, then a religious one and finally (currently) as a tourist location. A king about to be deposed by a rival family gave it to the church to foil the opposition family's claims to the sovereignty of the land (no official kingship site meant they couldn't claim the kingship of the land). The church used it as the cathedral for many centuries but as maintenance became too costly they built a new cathedral in the town of Cashel. The use of the site can be dated back to the 4th century! 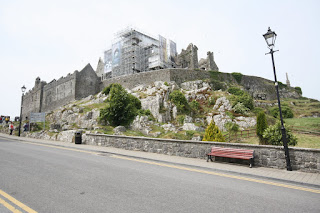 The Rock of Cashel from the road. 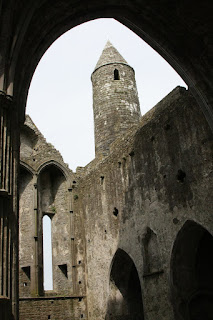 An 11th Century tower from the old cathedral 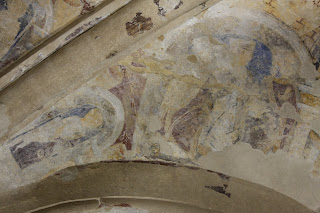 Some of the oldest frescoes in Ireland

There was a little more we saw today but I am almost out of battery and I am in the pub doing this. Will need to do more when we get home Saturday. XXXX
Posted by Ali at 9:20 pm

Hi Ali
Loving sharing your journey with you. Hi Richard and Harvey. history dating back to the 4th century, the 11th century - hard to comprehend that long ago. they were good builders. but the photos you've included just further my desire for Damian and I to get to Ireland, one day! you know you're going to need a special "music room" when you return with all your bang and clatter, preferably with soundproof walls for Richard!!! all ok here, weight loss has been accelerated by the bad gastroenteritis i suffered last week, dropping 4kg. i think the universe was saying, well Jane, if you don't want to help yourself, i'll help you! i even went to the hospital for some time on a drip.
anyway, slowly recovering. i'm dropping my facebook page too, so will need to stay in touch via email, phone.
love to you both. Jane xx

its all just so beautiful.... love the frescoes. I've just been teaching the kids about them... funny how the street light makes the seat on that hill look even steeper than it probably is. So how many "holidays" do you get??? You seem to have holidays every other month.
We are 2 weeks from our winter break. Looking forward to it too. We are of to Stanthorpe this weekend to a double 50th... I told them we are celebrating a 100th! it took them a while! Robert is delivering a yacht to Cairns.Having a lovely (cold at night) time... fishing, sailing, fixing motors... happy boy.
bye for now
loveya