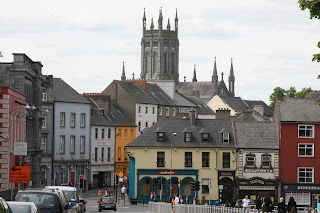 A view of Kilkenny


Our first full day in Ireland on Sunday started very quietly. We drove to Kilkenny and found much of it closed for Sunday. There were some touristy places open so we decided to visit one that sold woollen goods, linen, crystal, jewellery and tourist stuff. Some of the jewellery was lovely but a bit too expensive so that stayed on the shelf. The Irish linen was stunning, but not Richard's cup of tea so that stayed put. The woollen goods were beautiful, but I can knit them myself so no joy there! Next was the crystal...gorgeous, but getting it back to Aus in one piece.....

Ok we wandered into the part that at first I thought was the tourist tat! Oh but joy of joys they had musical instruments!! I bought a small bodhran, and a tin whistle in the key of D.... and a book of Irish pub songs and a book on how to play the Bodhran!! Watch out Harry we will have more to add to Grandma's magical music box when we are back home with you!! Now I just need to learn to play them!!....oh and yes there is more to add to this story but you will need to wait til I get up to telling you about today's events ...aah how can you stand the suspense!!!


On Sunday we also managed to visit an old church in a place called Gowran. Half of it is a 19th century church (St Mary's) and is still in use. 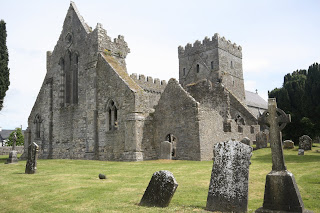 The other half was a 13th century 'house of worship for clerics living in a loose community' and looks like this.... 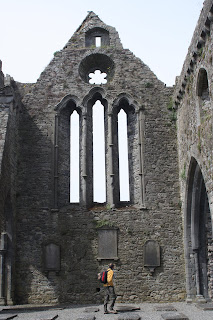 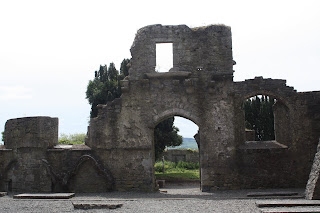 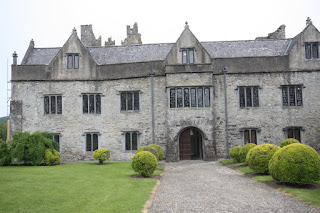 The view from the front.... 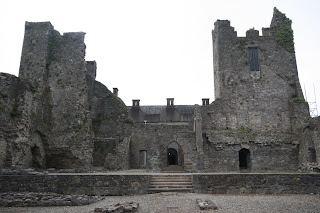 ...and the view from the back!

We made our way down to near a little coastal village called Dungarvan where we stayed for the night.

On Monday we drove up through Cork (seems like a nice place) to Killarney where we have been for the past few days. On the way to Killarney we did a bit of a diversion through Macroom and then around the Beara Peninsula. We didn't do the whole peninsula (not enough time) but cut across through the Caha Mountains. In some ways it is quite similar to Yorkshire! It was gloomy, rainy and very clouded over so no photos! At times in the mountains we came to lookouts where we could see nothing but cloud!!

Ok to Tuesday...yesterday! We went around the Dingle Peninsula and thankfully it was a much better day though still not brilliant for the photography of scenery! We did however manage some pretty good photos with the macro! 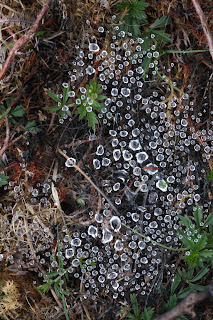 Dew drops on a spider's web 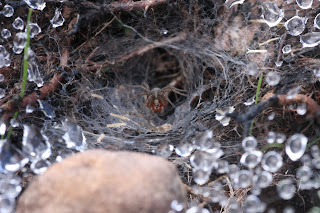 We did manage to visit a display about the potato famine's effect in the Dingle Bay area...they talked about a family called the Kavanagh's a lot....I wonder if they are ancestors of Bernie? This was part of the display area. 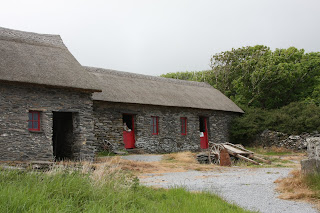 The coastline around the Dingle Peninsula was stunning, but as the day was a bit hazy the photos do not do it justice....but here is one for you anyway! 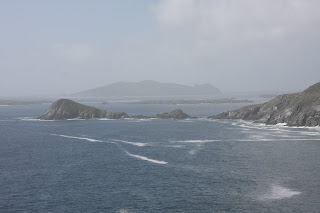 It is now after 11 so I will leave you on a cliff hanger about today! Catch you all soon.
Posted by Ali at 9:46 pm

those spider web photos are really excellent. you could enter them in a photo competition. jx