Yesterday we decided to head up to Cambridge for the day. We had both had a pretty full on week and were feeling a bit out of sorts so decided we needed a day out. We had the choice to drive up but decided to catch the train from Kings Cross Station. Kings Cross is less than half an hour from home and the trip to Cambridge on the train was about 45 minutes so we decided that it sounded by far the best option. No traffic and we could both sit back and relax!

Cambridge is such a beautiful old town. It is mainly the various colleges of the University. Many very old sandstone and very fancy buildings. Probably the most famous is Kings College (seen below with the chapel -where the Christmas Carols come from - on the right). 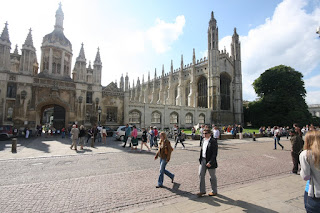 We arrived in Cambridge about 12:30, went and had some lunch in a lovely cafe and then wandered around town. I bought a few new CDs - the new Jack Johnson, one by a woman called Laura Izibor (she sounds a bit like Joss Stone) and the third from a couple of people we heard busking who are part of a band called 'Fernando's Kitchen' - guitar, and beat box - almost Spanish sounding. I also got into some great book shops and bought books for work and an art book that I will use for work, but it is a keeper. 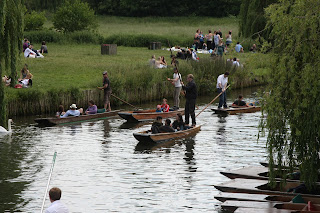 We left Cambridge on the 5:15 train and came home after a lovely day.

Today I have spent most of the day working ...preparing for next week at work! While I was sitting in my lounge I looked out the back door to see this baby fox playing in amongst the plants. 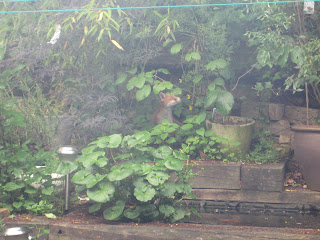 I have seen him a few times now (once with a dead rat in his mouth - well done baby fox!) and get very excited when I spot him. I have also seen an adult a couple of times. It is really interesting that when I see foxes in Australia I am wanting to get rid of them ....here I am really thrilled!! I know that given recent events in London with the twins perhaps I shouldn't be, but just look at this face (double click on the photo to have a closer look).... 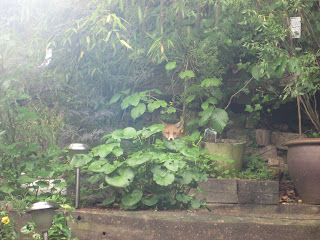 Those two photos are not the greatest because they were taken with the little point and shoot camera through the back window. If I had tried to open the back door he would have been off. As it was he saw the flash when I took the photo above and was out of there!

Hope you all have a great week. Lots of love from us both.
Posted by Ali at 9:00 pm

Alison, first of all, thank you for linking to my Journal Craft Inspirations blog.
I have enjoyed reading through your site and am pleased that you seem to be enjoying your adventure here in the UK. If you are ever planning a trip to Bath, do get in touch if you would like a local tour guide :)

Robert just delivered a yacht to Cairns (16 days)and is now home... more determined than ever to return to sea. Has a job as an MED II (engine driver) on a BIG trawler out of Hervey Bay. 30 days out, 4 or 5 days home. He said he will do a trip before committing for the long term, but pretty excited about going back.The owner sounded interested in helping him get his other tickets back too.... we'll see! He has mucked him a bout a bit already... pushing forward sign up dates and inductions... we'll see!!!!!
love your adventure and the fact that you can just up and go... love that about public transport too. Love trains and trams!
One week to go for us... must say I'm looking forward to it... looking forward to a new boss too!

must away and do 3 weeks ironing. loveya

Gill thanks for your kind invitation. I visited Bath about 12 years ago and loved it. I may get back there some time. I love your blog it is full of great ideas and information!