... I know a somewhat naffy title but I had to do it. Richard and I are on holidays...yet again! We are in beautiful south western Ireland.

We left home at about 6:00 am on Saturday morning and drove across to a little town on the Welsh coast called Fishguard. We left ourselves plenty of time for the journey across England and Wales as it was the beginning of a bank holiday weekend and we were concerned that the traffic may have been diabolical...it was however a straight run through and we arrived with plenty of time to spare. We decided to have an early lunch in a little pub and to our great joy (well at least my great joy) there was a folk festival on in the town that weekend with the pub hosting some of the events. When we walked through the pub door there were people in costumes and their faces painted black - some playing music some dancing. They were more or less the same as the English Morris Dancers, but said they were called something else...I missed the name! 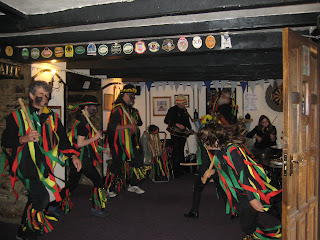 They do the same sort of dancing to reel music. The bells on their legs jangle the whole time and the is much banging of sticks in the process. It is very entertaining in a very daggy way!!

After watching these guys for a short time we moved to the back of the pub to have lunch. There were a group of people sitting around the table (started with an old guy on a violin and couple of others and gradually increased). They were playing very traditional folk music (I would call it Irish!) and sounded great. The photo below was taken a bit later. I think they called themselves 'The Vagabonds'. 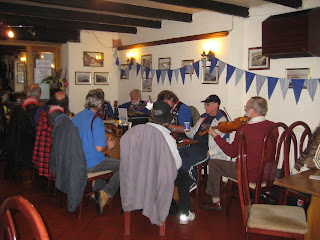 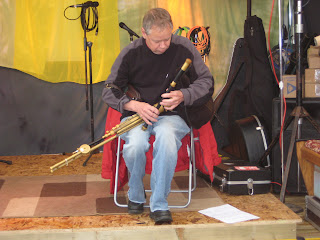 Unfortunately we did have to leave after about an hour so that we would make it to our ferry for the trip to Rosslare. 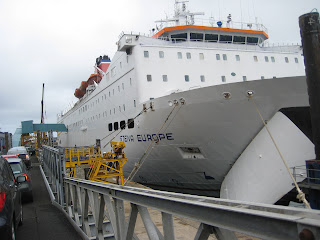 The ferry took a few hours. We had a big group of women having a hen's party nearby...they got drunker as we crossed, started singing (very off key) and making beelines to the loos to vomit!! Yuck!! We were glad to finally get to Ireland and get away from them.

Our first night was spent near a little town called Camolin. We went to the pub for a toasted sandwich and a pint (me cider and Richard Guiness) and to watch the hurling and heaven forbid the Eurovision Song Contest. We did get chatting to one of the locals and have followed his recommendations about where to visit! A very enjoyable evening!!

Sunday morning we left Camolin and headed west. You realise just how Catholic Ireland is when you find all (except the pubs of course!!) closed for Sunday in most places!!

I'll publish this now as my connection is not too great and add some more later.

top of the mornin' to you too!