Today we travelled from France down through Andorra to Spain.... and aah Andorra what a beautiful place! To get to Andorra we drove through the Pyranees - they are truly magnificent. The mountains are breathtakingly steep and stunningly beautiful. Photos do not do them justice, believe me! I think some of the most memorable aspects of the day were the steep winding roads, the massive rock catching devices lining the roads and the incredible number of incredibly long tunnels (some at least 2 to 3 km long) cutting through the mountains.

We decided to pop into Andorra for a sticky beak on the way past. It is a tiny little country tucked into the northern part of Spain on the French border and I am so glad we did. The shopping was amazing I bought perfume and a gorgeous scarf and we also got some very cheap Cointreau and Gin! They apparently have no sales tax and are a bit of a shoppers haven. We only had just over an hour there but I am sure I could have spent a lot longer!

My first impressions of Spain are that I think I am going to like it here! Not sure how we will go when neither of us has any Spanish under our belts. In the past we have travelled in France and Italy where one or both of us has a little bit of language - here is another story! In Amsterdam they spoke brilliant English - not sure about Spain yet! We intend to buy a Spanish-English dictionary as soon as we can and to see how we go from there. 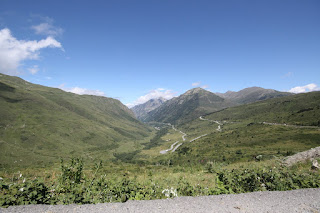 A view back down the road we had just driven along. 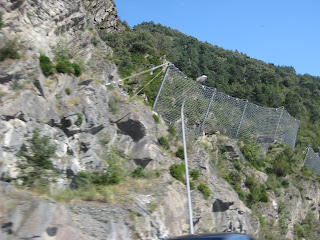 A fairly blurry photo taken on the move of one of the rock catching fences. This was a small one! 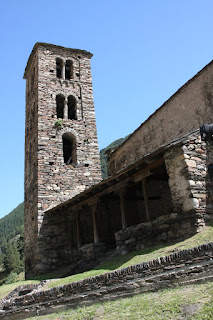 A beautiful old church in Andorra called San Joan de Caselles. It was built between the 12th and 16th Centuries.

We made further discoveries about Portia today - she reverts to a child when she is lost! Rather than say I haven't got a clue where I am she starts telling porkies! She will glibly say turn right in 100 metres when there is no right turn - worse still there is one and she sends you on a circuitous goose chase while she thinks about what she has done and then sorts it out. Trying to decide if she telling the truth or porkies led to some fun moments today I'll give you the drum!! We have discovered she is not to be trusted as you emerge from a tunnel (maybe she is scared of the dark!) and not to be trusted on new roads (mmm the French and Spanish have been very busy lately!). Still you have to love her with her very bad pronounciation and wayward habits!
Posted by Ali at 10:38 pm

I was reading about the long tunnels in some magazine in the doctors office the other day.... very interesting. I don't know that I'd be very good as a passenger on those winding roads and long tunnels. I'd need to be ion control to avoid the motion sickness.
Portia obviously is a bit like me and gets motion sickness too! can computers get motion sickness????
What Spanish food have you tried?
Gaudi................mmmmmmmmmmmmmmmmmmmm (big sigh!!!!!!) take lots of photos for me!
Last sailing day for the winter series today. We are back to fortnight on Father's day... I've offered to be timekeeper.... again! I wonder if Ill get the job this year????
One week till I get to listen to Tony Attwwood for 5 or 6 hours...can't wait. Off to Cania Gorge at the end of the month fishing.
loveya

Robert experience with those navigation things is interesting like your. In Brisbane where he had to rely on it, it would send him up one way streets, around in circles and the wrong places. One day it told him to go to an address and he was exactly one street from teh correct address! He found it himself..... have fun with Portia!!!