Day one of our Spanish Adventure

Well I know it's been a long, long time and so much happened in July that I just didn't get here. We had Ash and Ben to stay. Richard and Jon went to the cricket at Lords and Richard and I got to go to the Wimbledon Men's Final to see Rafa win! Ash left and the next day Kristen popped in for for ten days from Dubai (an email one Friday afternoon saying I am arriving at Heathrow at 10:00pm tonight Aunty Ali!
How cool is that?) We went to Brighton (just Richard and I), to Bath (with Kristen)and have had several days out in London(with Ash and Ben and Kristen) and to top it all off my school year finished! The wind up at school included all the normal reports to finalise and performance reviews to do for three Teaching assistants in my classroom, presents to make for staff and students leaving and to top it off a play for our end of school year performance including the making of props, calming of ruffled feathers and learning of parts! We also celebrated Richard Mum and Dad's sixtieth wedding anniversary and to top the month off Richard had a three day hockey tournament and I even got to do an art workshop! So I am sure you can appreciate how flat out we have been.

OK so where are we now...in a hotel in France in a place called Abbeville. We left home about 9:00 am today and drove to Dover where we saw the following: 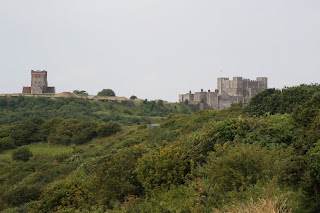 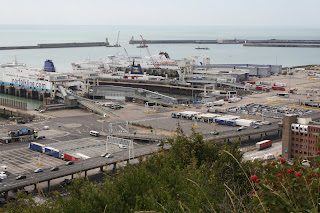 The Port of Dover 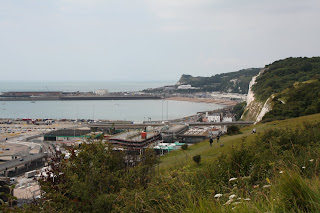 The Port and a small section of the white cliffs 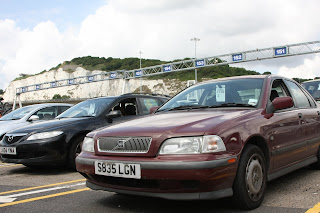 'Bruce' our Volvo with some of the white cliffs behind him


This was the view as we came into Calais: 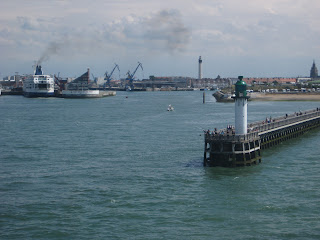 ...and then we drove our car on the wrong side of the road to get here. To say the first little while on the road was nerve racking is an understatement. The roundabouts are the scariest part and watching a car doing a left hand turn and cutting across in front of you is off putting to say the least. It's not the first time I have been in vehicles in Europe, it just seemed even stranger today sitting in our car on the 'right side' and being on the 'wrong' side of the road.

Hi Ali, well i can understand why i've waited so long for an update. busy, but what a fantastic July you've had. a very special milestone for Richards parents, congrats to them. you're now halfway through this twelve month adventure. what kind of art course did you do? i'm doing an organic gardening course this Friday. much love to you both. enjoy Spain. J xxxx with hugs!

wow! what a month... end of term was a bit hectic by the sounds. How did your boys cope? I'm off to the ASD symposium next week. I get to listen to Tony Attwood for a few hours.... JOY!
Scary stuff on the wrong side of the road! Is that all of Europe? mmmmmmm!
Robert has a new job... in a recycling yard. So he spends his time pulling things apart, sorting metal and cutting things up. Having a lovely time! Much happier too! much easier to live with! No more furniture!
I had today in Noosa with my mate Robyn from Victoria. She came up with her Mum to visit her uncle for 4 days and I got one of them (days that is). It was fabulous! She has just made it to 5 years all clear for cancer! so we ate well and celebrated with coffee.
New Boss settling in quietly... so far so good!
write more soon. PLEASE. just love reading about your adventures...