We spent our second and third day in Spain in Barcelona. I loved it! We decided to take a two day ticket on the Barcelona Bus Touristica. They have three different routes around Barcelona and we managed to go on them all. Our first day we went to Santa Maria del Mar a Catalan-Gothic style church and then wandered around the district for a while until we got to the Ramblas. This is a street that has a pedestrian area down the middle under the shade of fantastic Planes trees. There are basically four sections to it: food, pets, plants and books. Scattered all along were people dressed in all manner of costumes ‘busking’ for photos with them. Some of them were extremely well done. Off to one side of the Ramblas we came across the most fantastic market with some of the most beautiful displays of fruit and veges I have seen. 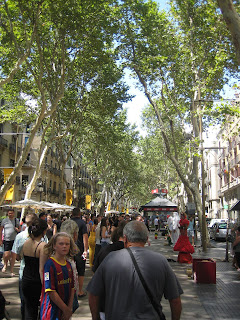 A view along the Ramblas - note the buskers on the right. 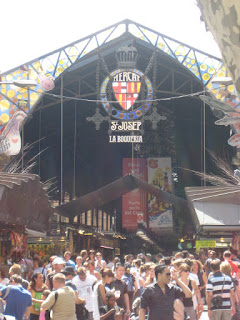 The entry to the markets 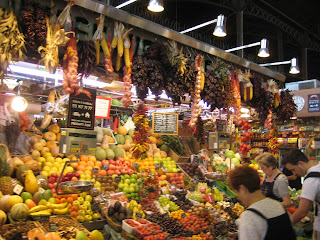 One of the fruit and vege displays

After visiting the Ramblas we hopped back on the bus and went to the Sagrada Familia. This was the most amazing church designed by Gaudi and just mind boggling. He designed it knowing he would never see it finished and even to this day it is unfinished! I had not really seen any of Gaudi’s work before this trip and at this point Richard and I had discussions about the English word ‘gaudy’ and whether or not there was a link to the artist Gaudi (we later Googled and found out that it is not so). On my first day of exposure to Gaudi’s work I was speechless really. There are no words to describe how ornate and outlandish his work seemed at this stage. It sort of reminded me of a child’s drawing of a fairytale castle with bowls of fruit and animals added on where ever possible. There seemed to be no small surface that had just been left – every square inch was ornate. We were running out of time so decided not to go in – with what I know now, I am not sure that we made the right decision, but then we would not have seen other stuff we managed to get to! 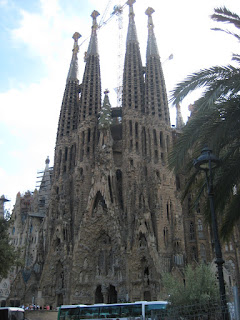 One section of Sagrada Familia unfortunately they are doing more construction so there were cranes in the way where ever we pointed the camera. 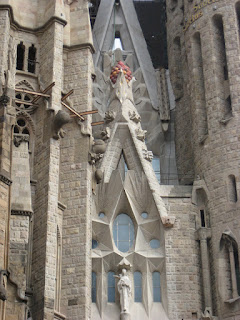 Check out the fruit and the snails!

Not yet Gaudied out, we then went on to the Parc Guell. I am so glad we went there! Once again we really could have had longer there but what we saw was fabulous. In all my years in horticulture I have never seen a park that is this fanciful. The entry has the most magnificent stairway and then there are surprises at every turn. It was incredible, but at this stage I was still somewhat confused about my feelings regarding Gaudi’s design style. I was struggling to work out how he became recognised in the first place. What made the powers that be in the early 1900’s take notice of him? And why wasn’t he seen as a crackpot? Why weren't his designs seen as being over the top? Again Richard and I had long discussions about this as we walked around the park, sat on the bus and later ate dinner. 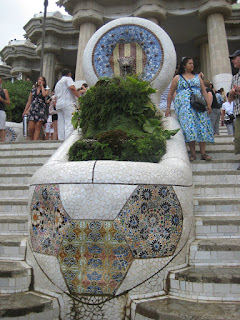 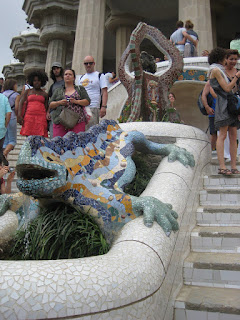 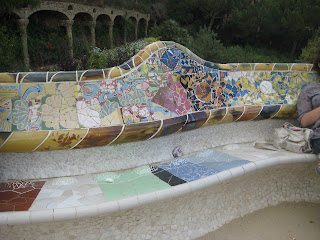 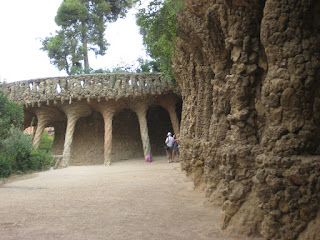 On Friday we set off again on the buses. I have to say they were open top buses and the weather has been fantastic for touring Barcelona in that way. We decided to do a little bit of shopping (first pair of fabulous shoes bought!) and then went to Casa Batllo – Gaudi’s house in Barcelona. OK this is the point that I became an absolute fan! The house is absolutely fabulous. The façade was interesting to say the least and again when I was standing out the front I was wondering if I should be spending my money and going in – Richard had decided not to – but in the interest of learning I decided to press on. 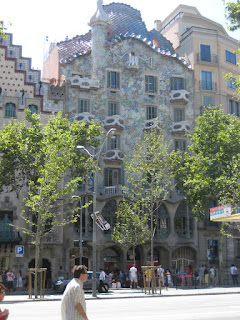 I got inside and the battery on my camera immediately died so you will need to go to the website to get some idea of how beautiful it is. One word WOW! The design elements in this house are astounding and having seen it, there is now no question in my mind as to how he became so well renowned. I still think that as Richard has said he must have been a fast talker to have managed to have convinced some of the more conservative folk of the early 20th century, but I also think that if there were doubting Thomases in his day he would have just needed to invite them over for dinner – actually I am not sure whether he actually lived there or just designed and managed the building of it! Every detail of this house leaves nothing to chance there is thought and reasoning behind it all. The smallest elements like door handles and stair rails are designed ergonomically and still look absolutely fabulous. The chaotic patterning on the outside is greatly reduced inside but the shapes of the rooms, doors and windows are anything but standard. It was extraordinary! The inside in fact makes sense of that extraordinary facade. After I came out of there we went for a bit of a walk and then a bit more of a bus ride and then back out to our hotel.


Downstairs from our hotel Richard found a Bata shoe shop and yay they sold the fantastic as opposed to the drab Bata shoes and yes I bought yet another pair – a girl can never have enough shoes!!! I would have had at least two pairs but the ones I bought were the only ones I liked in my size and they were a bargain marked from 75 euros down to 29 (about $42 in Australia).
Wow this is going to be a long blog if I add Saturday to it so I might leave it here and add Saturday as the next instalment. It was a great day too!
Posted by Ali at 10:11 pm

I have only adoration for Gaudi. I want to mosaic my garden like Gaudi. His quirky interpretation on design is magnificent, but once you analyse it all it does actually make sense. I've never really thought about the powers that be and how or why he was accepted... but I certainly will be reading more now.
$42 IS A BARGAIN! WELL DONE.
Well done to Richard too for lasting nearly all day with Gaudi.
What food have you eaten... Spanish I hope!
I saw an 'arty' film once of a view from one of those Spanish tour buses... they took video all day from the front up top and then to play it they ran it in time with some Spanish guitars... fast, slow, etc etc... very weird, but beautiful. I was mesmerized.
Now... the fruit and veg stall. What are those dark dried prune looking things hanging with the garlic???