OK so I have got a bit behind with the blogging! I thought I would add something today about our single day visits and try to get back to Cordoba and Sevilla a bit later!

Our first one day stay was in Alicante. It is a little coastal town and was quite pleasant other than the occasional waft from the drains. We started our time there by going for a wander around town. This is one of the avenues we wandered down. I just love the pattern of the paving! 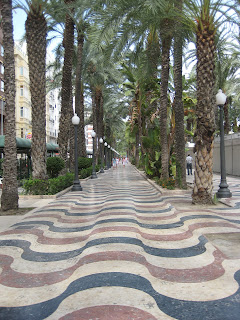 As we walked around we came across the following graffiti in one of the less salubrious areas of town, but again I thought these were great! 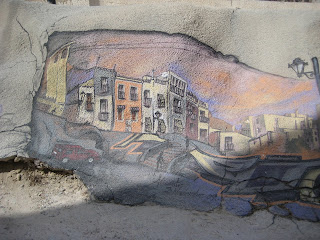 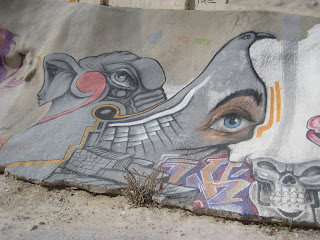 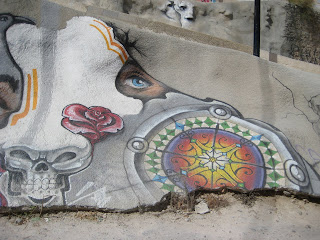 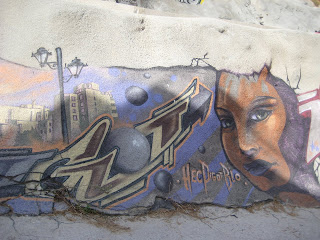 In the centre of the town is a big, old, run down castle. It is on the top of a very steep hill. To get up to it we walked through a long underground tunnel and then caught a lift up through the centre of the hill. A much more comfortable option than trekking up the hill, given how warm the day was. 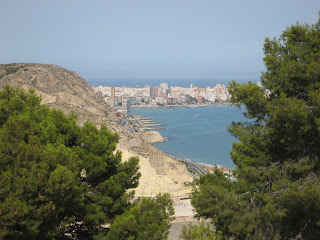 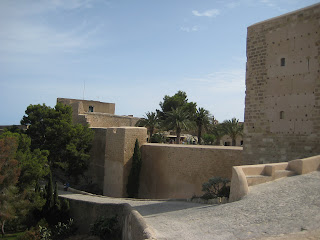 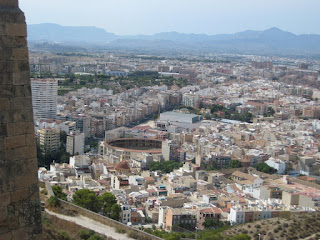 After our trip up to the castle, we went for a walk along the seafront and sat in a bar and enjoyed a cool drink. We decided that Hervey Bay's beaches have a lot to offer when you see the crowd gathered here! 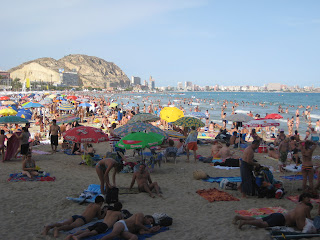 Dinner in Alicante was our first sampling of Sangria. I really like it, although apparently as soon as the locals see you drinking it they KNOW you are a tourist, because none of them would be seen dead drinking it! It is traditionally made by soaking fruit in something like brandy (this varies from place to place with other spirits used in different places) they then add fifty:fifty cheap red wine and lemon squash and then add some cinnamon! Yum! We also had our first real tapas here and decided we love it. Now almost a week and a half later we are very comfortable with ordering tapas!

Our next one day trip was a couple of days ago when we drove from Sevilla to Cadiz, spent a couple of hours in Cadiz, and then back tracked to Jerez for the night because the accommodation in Cadiz was ridiculously expensive! Cadiz is another seaside town and the old part was lovely. It was delightfully cool after the 40+ degree days in Cordoba and Sevilla! It was a cool 32 while we were there and had a beautiful seabreeze blowing through town. We walked along the seafront:- 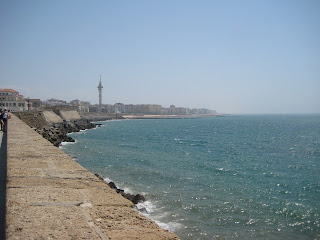 and then out to the point when we saw this ahead, so decided to walk out to have a look:- 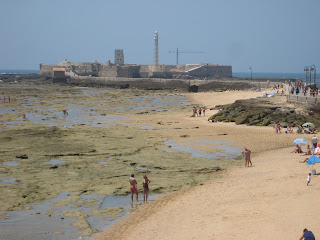 but this is what we found at the end of the walkway:- 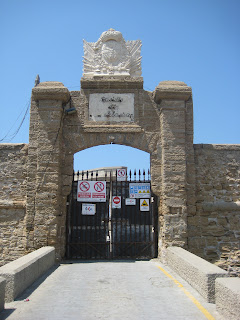 Again the beaches were very crowded.... 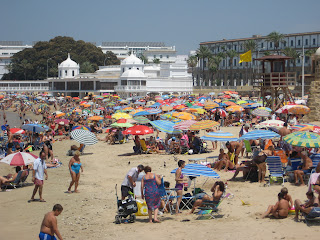 After lunch in one of the cafes in a little alleyway.... 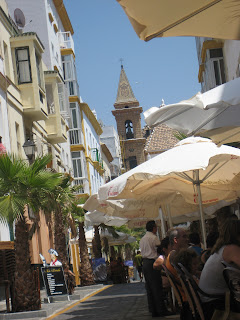 we drove on to Jerez.

In Jerez we stayed in the most fabulous hotel in the old area. They had one really quirky piece of art in the foyer that we both loved. The first photo is the face of the sculpture in the second photo. She was just beautiful and obviously thought the painter had done a great job! 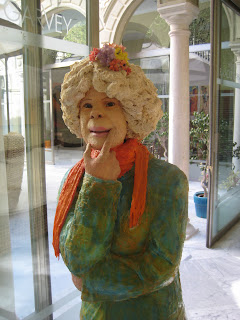 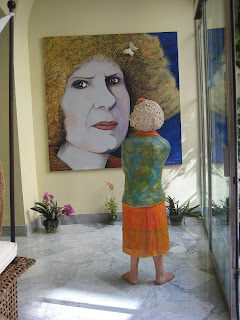 Now the next morning leaving Jerez was an adventure to say the least! Portia once again became a problem child and started telling fibs again! We were trying to get out of the old part of town and came across a police car. We stopped and tried to ask how to get out of the area, they didn't speak much English and we certainly don't speak much Spanish! It ended up with many hand signals for us to turn our car around and follow them - hence our police escort out of town! We were highly amused as I think, or at least hope, were the policemen! From there we headed for Gibraltar. Now this is very long so you will just have to wait to hear about the monkey attack that happened on the same day as the police escort! ....that's what you call a cliff hanger to make you come back! (Richard has just said 'Yeah, subject to you writing it!')
Posted by Ali at 4:34 pm

i'm on the edge of my seat, waiting for the next installment! can't say i've ever had a police escort. did the monkey bite your hand? Nothing much happening here, election banter taking up all the headlines. much love from home, J xxxx

ah hah!!! Police escort.... ha ha ha!!! not so bad after all. I had all these thoughts going through my head... now its OK... just love the sculpture too. very good! Does she only look at this one painting or do they change the painting I wonder????
wow! what great graffiti... love them.
So at Alicante you were looking at the Mediterranean Sea?
So how far from Alicante to Sevilla? Seemed like a big drive?
Looking forward to the next installment... love always