I am running a bit late with this post. It is the first post for the Artful Readers' Challenge on the Art and Sole blog.  I finished the book just over a week ago and started on the artwork then life was somewhat interrupted by local conditions.  I live in a town called Hervey Bay in Australia and we have been involved in all the rains and the floods that have been happening here lately.  Our house was damaged and friends' homes had some major problems as a result of the storms this past weekend and I have been diverted by sorting all that I need to do as a result.

The book I chose to read this month was 'Gone Girl' by Gillian Flynn.  This book was an interesting read that really keeps you guessing who is doing what and who is telling the truth.

The story evolves around the marriage of Nick and Amy.  The chapters alternate between the telling of events from Nick's and Amy's perspectives.  The couple are living in Missouri after having started their life together in New York.  The move to Missouri was so that Nick could support his twin sister in the care of their ill parents.  On the morning of their fifth wedding anniversary Amy disappears and the truth about their relationship begins to unfold.

This book takes a close and often uncomfortable look at relationships and how they are seen by both the participants and the outside world.  It is not just the marital relationship it looks at but rather all sorts of relationships.  There are the ones between parents and children, siblings and workmates.  There are relationships between the media and the community and interviewers and interviewees.  There is a strong theme of manipulation running throughout the whole book and the question of 'Who is pulling whose strings?' constantly came to mind as I read.

The characters in this book were without a doubt, incredibly frustrating.  I don't think I could honestly say I had any real sustained empathy for any of them.

It is a thought provoking read and for that reason I am happy to have read it.  I would probably rate this book 3.5 out of 5.

Here is the art I created to go with it. It is in my journal and was done with prismacolor pencils, inktense pencils and acrylic paints.  I found drawing a male quite challenging! 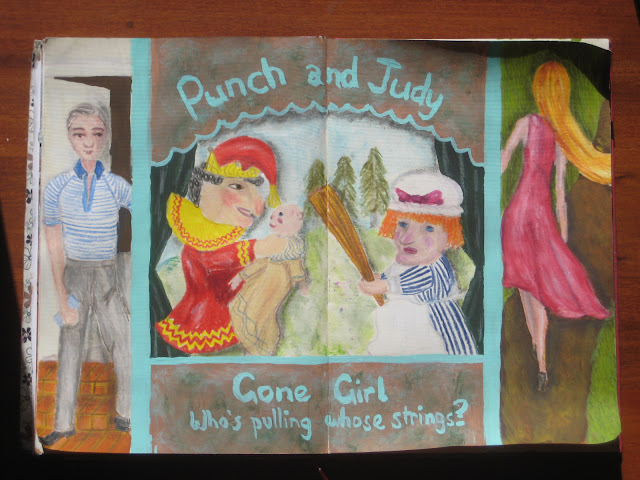 Hm, the book doesn't sound like something I would like to read... You did make a great page after such a read! ♥

Interesting review, thanks for your honesty! Love the artwork though - fantastic stuff. And sending you and your friends hugs given the issues you've had recently hope you manage to resolve quickly!

I hope things are improving with the weather situations.

The book actually sounds like it had the chance to be good. I like the idea of the chapters bouncing back and forth. I may look into it.

Nice work with the art, too!

Wonderful art journal page. You did well completing the read. I don't think I could have. Do hope you are getting over the floods. Been watching on the tv and send you our best wishes.

oo this book sounds intriguing, i agree sometimes characters can be frustrating but all the sub plots probably make this a good read. Fantastic journal page, you did a really great job drawing the man. Love how you have the girl walking away.

I like your interpretation with Punch and Judy... Not sure it's one for me but your journal pages from it are fan.

I hope you and your family are OK now?

It is so interesting to read your review of 'Gone Girl' because it is my pick for Feb. Your journal pages so accurately interpret the book...love your drawings & the colors are brilliant. Sending blessings to you and your family.

You have done really well to have got around to doing your review and art with the turmoil you must have been going through. I hope that conditions will improve for you, your family and your friends very soon.
Your artwork is really amazing, I wish I had the confidence and the skill to be able to draw and paint like you. It sounds like your book was entertaining but not one to reccomend as a stimulating and gripping read.

Sounds like a good read - apart from the characters lol! Nice piece of art to go with it too - love the Punch & Judy!

The book sounds thought provoking...I've been wondering whether to read it or not (I've seen quite a few reviews and references about it).....still undecided but thanks for an honest review.
Your artwork is perfect for the story.
Hugsxx

I do hope that things are getting back to normal for you. Fab pages, wonderfully painted. Love them.
Jen x

A very interesting review, and nice and clear and easy to read. The artwork is great - it reminds me of one of those weather things, where either the man or the lady pops out of the doorway, plus the very clever Punch and Judy element. Great combination of post and picture, I enjoyed it - even if I would not now be encouraged to read it. Thank you.

I think the comment has gone through, but not sure. I had to have 7 or 8 tries at the horrible word things that have to be typed before a comment goes through. Very difficult, especially for people whose eyesight is not too good. So I hope it did come to you - I really enjoyed the post.
Will try these words again now .....

Very interesting artwork! I like how you used the 'Punch and Judy' in the piece. Really makes you think about it.

Ooh now I fancy this book despite the fact your review doesn't rave about it! Love the artwork though ... Men are def more difficult to do though aren't they!

Also hope you are safe and well from the storms and the troubles have been sorted.

It is really worth the read.....just not a read that is uplifting and Punch and Judy are very much part of the book!

Oh sorry and for all who have commented about the storms...we are gradually putting things right again!

Thanks for giving such a good feel for what the book is about. Your artwork seems the perfect accompaniment to the story. Great illustration!

So sorry to hear your house was damaged in the storms Ali... your book sounds very interesting... I love thought provoking reads... and your artwork is stunning... so cool with the Punch and Judy show... and the man you drew is fabulous...