Another gentle start to the day!  Today we woke at about 9:00 and lazed for a while.  By 10:00 I was showered and dressed and had decided that I should head out the door to see what was happening when the bells started to ring.  Not necessarily an harmonious and melodious sound but they were a sound!  I decided to take my sketch book, coffee and supplies out and to draw!  This is the result of this morning's journalling: 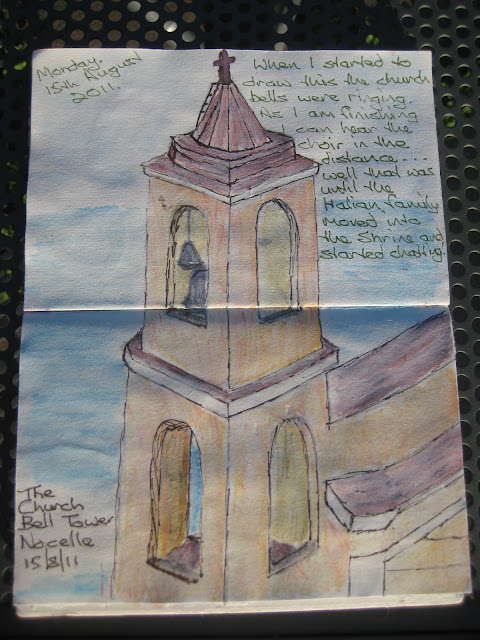 I am quite pleased with this morning's effort which was drawn with pencil then coloured with inktense pencils. I then went back over the lines with a brown pitt pen and painted the cross with Shimmering H2O (that info is really for me!).  I was quite pleased because it only took me about half an hour all up so I am getting faster with architectural things and getting a reasonable likeness down!  Today was some sort of religious bank holiday in the area for the 'Assumption of Mary'.  Hence the church bells, service and choir!  I sat outside in the same spot as yesterday (once I had most of the drawing done) to do to most of the colouring and writing!  Richard joined me this morning.  It was lovely to have him beside me as I drew.
Just after midday we left and caught the bus down to Positano.  It's a pretty village, but we decided that it was no place for the infirm or elderly as it is built into the side of a cliff and is either stairs or steep slopes!  The bus trip takes about half an hour and is positively hair raising!  The roads are very narrow, windy and steep.  The driver beeps his horn the whole way down and I have to say at one point when Richard told me (I was facing backwards) that he was driving one handed while on his mobile phone I decided that it was too much information!  Anyway we made it safely and went straight to a restaurant and had a fabulous lunch.  The seafood here is brilliant!
After lunch we wandered around Positano.  Mainly in and out of art galleries, clothes shops and tourist shops - all ridiculously expensive so nothing bought.  We had  a gelato and then decided to try to find a shop to buy some simple stuff for tonight's dinner before coming home.  We walked past one place at the bottom of the hill up to near the bus stop.  Had a look in the place near the bus stop and went back down the hill!  Here are some photos from around Positano.
The main pathway down the hill 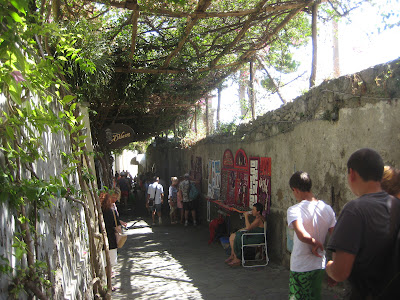 Stairs up to the first shop and the slope down! 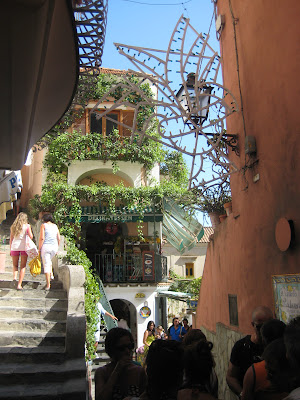 The shop where we eventually bought tonight's dinner. 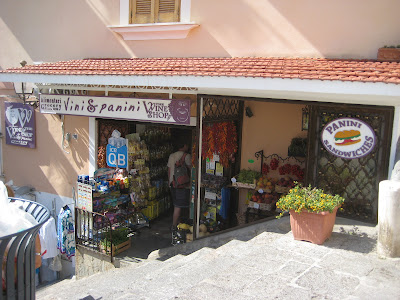 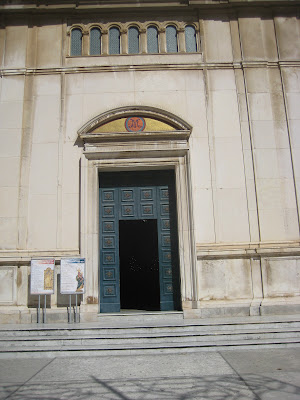 Stairs near the church 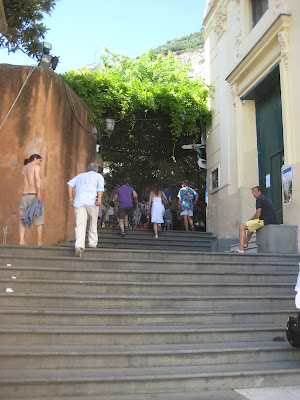 After our walk back down the hill we had about fifteen minutes to make it back up the hill to the next bus.  As we headed back up the hill however we came face to face with an Italian funeral coming down the hill towards us.  The coffin was proceeded by one group including the priest saying prayers, then came the coffin carried by six or eight pall bearers and then the congregation of mourners.  We obviously stopped to allow them to pass, bowing our heads respectfully.  After some time, we looked at each other, and by that we I mean Richard and I and the surrounding others, and thought that's it and started to move on.  We moved about 100 metres up the track and there was a 'pedestrian jam'.  Streams of people were still moving down the hill obviously connected to the funeral and those of us heading up the hill were going nowhere fast!  Well we eventually made our bus otherwise it would have been another hour's wait!  The bus was packed and for the first 10 minutes or so I nursed a little 4 or 5 year old French girl on my lap.  It was very hot in the bus and she was safer on the windy roads sitting on my knee.  Richard decided I was getting back into practice for grandma mode! The things you do when you travel!
At home this afternoon we have taken it easy again.  We went out into the courtyard for dinner.  While we drank our wine and ate we watched what we presume was a helicopter from the local rescue service practice filling a bucket from the ocean and then dumping the water again.  We listened to more Italians as they chatted while they sat in the Shrine opposite our gateway and most importantly we enjoyed the opportunity to just be together watching the world go by. I took these photos.
Our dinner.  Great company, fresh bread, ham, sun ripened tomatoes and chianti.  Life doesn't get much better! 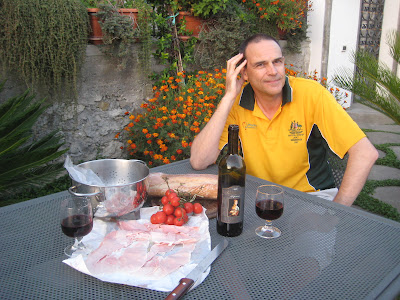 Our view of the setting sun along the coast line from Positano to Capri. 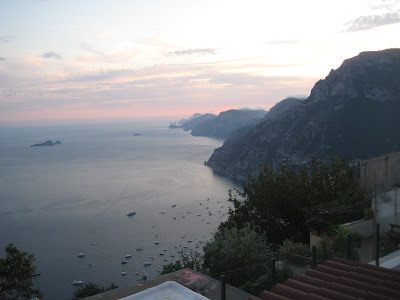 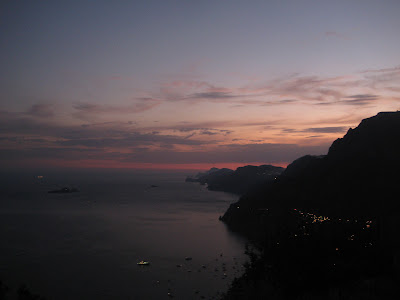 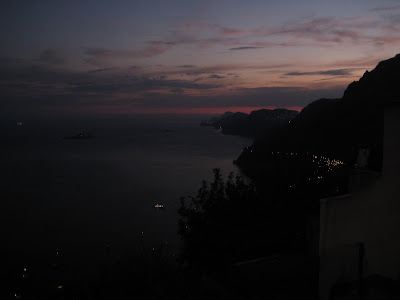 Mostly I breathed long and deep as I reminded myself just how wonderful life is and how I got so lucky to be living it this way!
Posted by Ali at 9:10 pm

holy cow. what a day. you must be so grateful. Your church drawing is outstanding. I'm just sneaking a quick cuppa before the final race around to get off to school and work, so am thrilled to see the Day 4 update. Nearly wet myself laughing at the bus ride down the hill! love J x

I could not sit with my back to driver... but damned if I could sit and watch on those roads. wowee!