Our journey home - days 8 to 10, Spoleto and Assisi

On Saturday we drove from the Amalfi Coast to Spoleto in Umbria.  Once we were off the coast, the roads widened and straightened out considerably and we were able to make good time.  We arrived about four, but had arranged to meet the owner of the apartment at five so we did a little bit of grocery shopping, had a cold drink and then waited for her. The apartment is right in the middle of Spoleto and so that means we have to park the car on the outskirts of town and then walk in!  It’s OK until you consider we are moving half a house with us!  So we did two trips to get most of it into the apartment!
Our three front doors!
Door 1 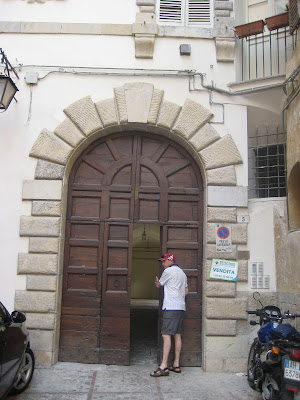 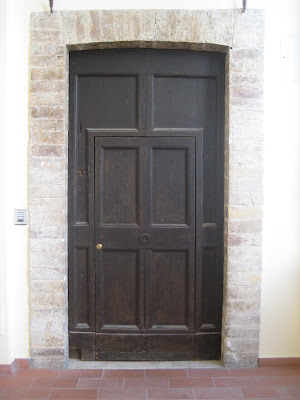 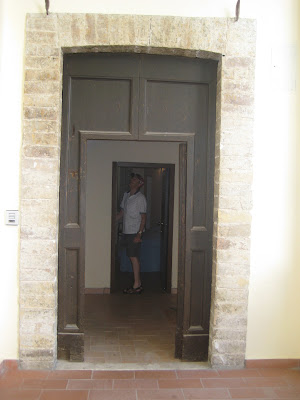 The first night by the time we had settled in we just went for a short walk in the immediate area and then had dinner at a restaurant that is almost at our front door!
On Sunday we stayed in town.  Richard’s shoulder was hurting from all the driving around bends on Friday and we were both tired.  We did boring things like some washing and just lazed around and read and snoozed!  In the afternoon we went down to the piazza at our front door and had gelati.  The best we have had so far on this trip!  There was a lemon one that was just superb!
Later in the evening we went for quite a long walk and took some fabulous photos of the area:
Nearly every village we have been in has had a stage set up.  This is the first performance we have seen though! 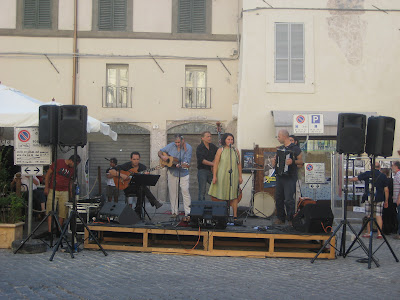 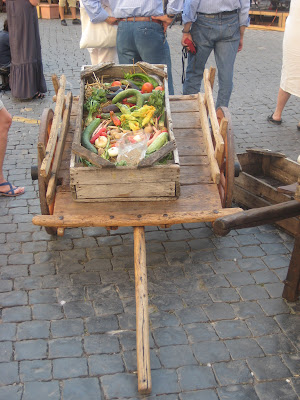 The clock on Piazza Mercato 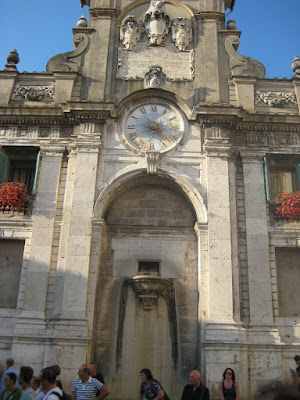 One of the many lane ways! 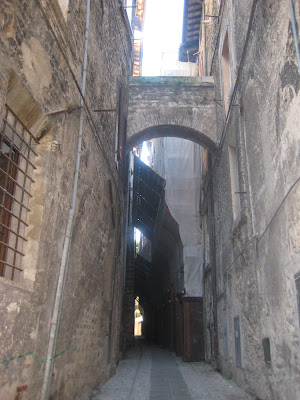 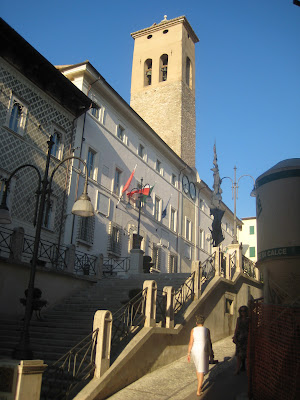 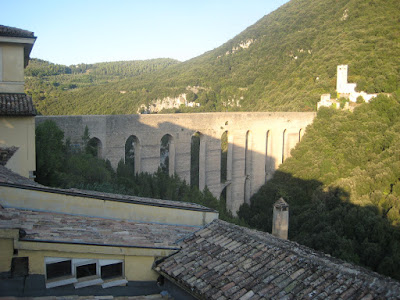 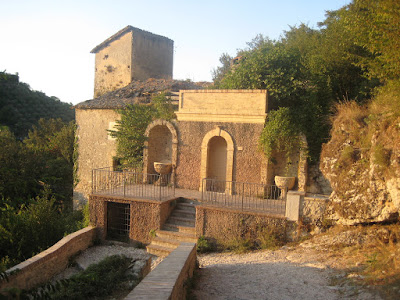 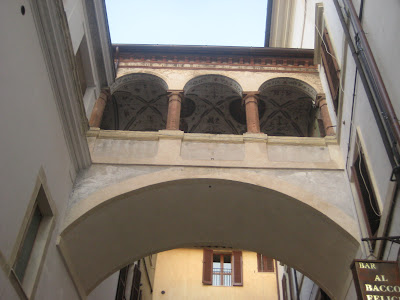 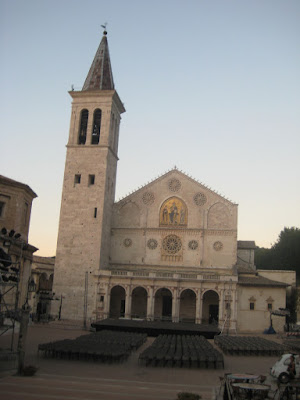 As you can see it is breathtakingly beautiful.  After our walk we went out for dinner and both had rabbit casserole.  Again it was fabulous and for desert I had pineapple and basil sorbet!  We are getting an ice-cream maker when we get home so that I can experiment!
Today, Monday we went to Assisi.  We started off at the Chiesa di San Maria sopra Minerva Tempio di Minerva.  The paintings in there were breath taking.  There were no photographing signs everywhere.  We find it really strange that as atheists we respect that but a lot of the obviously catholic people were madly clicking away! There are signs also asking for silence, yet so many do not respect that either!  Here is a photo of the outside: 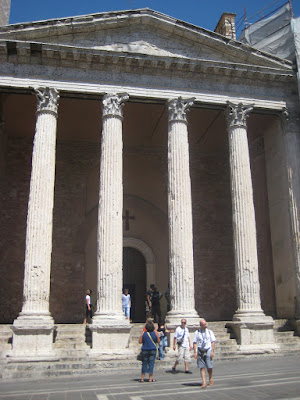 Next we went down to the Chiesa Nuova.  It was built in 1615 on the remains of the building believed to be the house of St Francis’ family.  We were able to take a few photos in here and some just at the door.
St Clare and St Francis 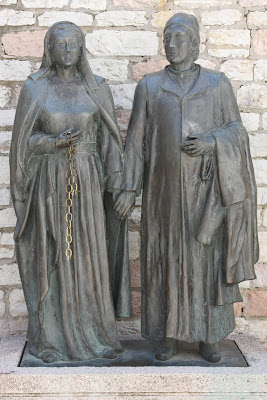 The dome in the Chiesa Nuova 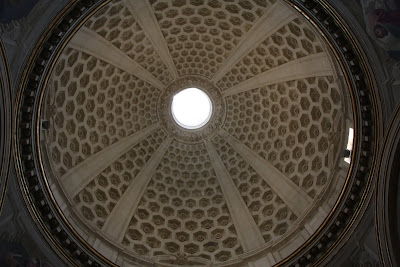 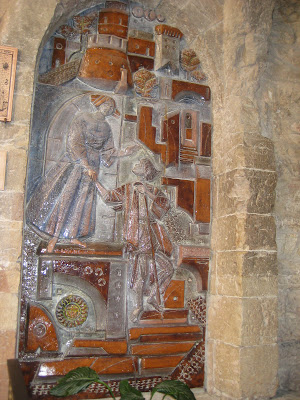 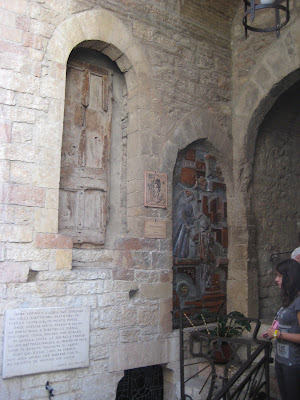 The Oratorio di San Francesco Piccolino is a tiny chapel where it is believed St Francis was born.  Here is the doorway to the chapel, but again it was not appropriate to take photos inside. 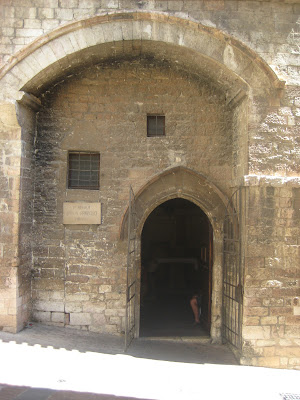 Our next stop was the Basilica di Santa Chiara.  It is an example of Italian gothic architecture built between 1257 and 1265.  It has paintings from the 12th-14th Centuries and the body of St Clare is preserved in the crypt.  Again no photos, but again people taking them!  A bit macabre if you ask me!  To top it off they make the sign of the cross as they leave.  Do they need to then go to confession after that? 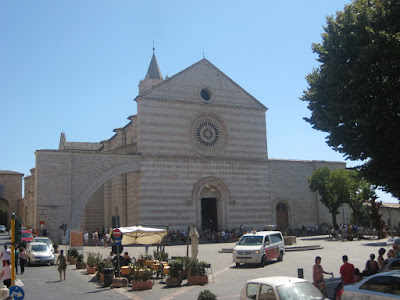 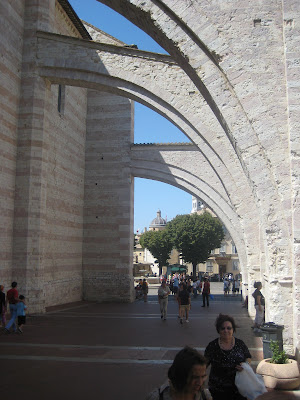 We had lunch and then trekked down to the Basilica di San Francesco.  This was fabulous.  I actually found it very moving and more so because in here people seemed to have more respect.  Is that because there were quite a few nuns and priests around?  I don’t know.  The interiors of both the upper and lower churches were fabulous.  The most glorious paintings and it all just felt so, so peaceful. 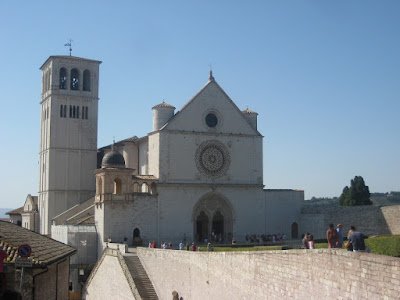 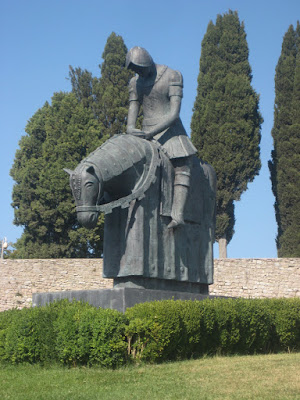 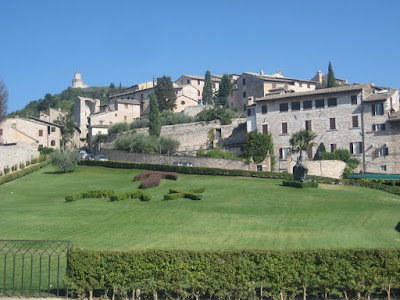 We went down to the tomb of St Francis and I have to say that I found it very moving.  It was incredible seeing the reverence of the visitors compared with other places we had visited.  They filed past the tomb and touched it.  I saw two old ladies touch the tomb, and then turn to each other and hug with tears in their eyes.  It brought the tears to my eyes.  Visiting the tomb obviously meant a great deal to them and here the respectful silence was palpable.  Walking away from the tomb I spotted a young couple with a baby with obvious disabilities sitting in the chapel saying their prayers.  The mum had tears in her eyes, again I welled up.  Although I don’t believe, I did have a thought for some of my dear friends who do and sent my wishes of well for them.  I wonder if they count?
I have found a cafe very near where we are staying with wifi!  It has a great atmoshpere and I have eaten breakfast and am sitting drinking and iced tea as I do this.  Richard is or was still at home in bed.  The music playing is fabulous.  I will say bye for now and post this.
Posted by Ali at 10:08 am

Hi Ali
quite a moving post. I would have been touched by that mothers emotion too. Looking forward to your tomorrow! love J xxxx

I wonder if the rule for no pictures was to keep flash bulbs from going off all the time which could be so annoying to others.

To try to answer your question because it really seemed to bother you, there is a difference between sinning and not following a rule. Sinning implies you KNOW you are doing something bad. Breaking a rule could be bad, neutral or a good thing. Taking a photo without a flash and not bothering anyone would probably be neutral. Reporting pedophilia to the police even if the priest were to say not to would be a good breakage of his "rule" (and should have been done much more and much earlier than it was- ah, the power of the church hierarchy). Murdering someone would be a bad breakage of a rule. Do you see the differences? It's really nothing more than what we do in secular society. We can go over the speed limit a tiny bit and no one cares but if you are going so fast you need to weave in and out of traffic and you are scaring others then you are doing a bad thing (sinning). Some rule breakages are more serious than others just as law breaking can be. The church used to have a super tight hold over it's people which they no longer have. Once people are educated you cannot have the same control. So some people will take photos figuring no one has the right to tell them not to. They can tell them they can't sell the pictures and most people would accept that but for personal use? Really, except for flashbulbs or annoying others, why shouldn't they get to? Why shouldn't you get to have your memories recorded? But, some people will be rude and do what they want even if it is inappropriate and not being there I wouldn't know. I am just trying to explain how breaking a rule in not necessarily a sin. Goodness, I've left the church because they are trying to go back to the days of total control of the people and here I am explaining them. Ah well, the Church has been a major part of my life.

It sounds like some of these spots are really neat to see. I would enjoy seeing all those old time-worn places.

I'm sorry, I forgot to say who I was. I am Timaree from Jane's Supplies Me class. My comment will appear as freebird.

Hi Timaree, I do understand the difference between sinning and just breaking the rules. I guess for me lack of respect for the religion you actually follow is just another example of the hypocrisy of some of the so called religious. I think what 'bothered' me if that is the right word was that. As I said, I am not of the catholic faith, but still believed it was right to follow the rules as requested in the church. I don't agree with the rules or the request but when I am going into someone else's home I see it as only right that I should not do anything that they are not comfortable with.