Wow, those days since I last updated have gone quickly!  Just two weeks today and we will be home in Australia; but we have a few things to do before then.

Our last few days in Spoleto were very lazy ones.  We lounged about and relaxed a lot!  Richard's shoulder was really giving him strife and the bed in Spoleto didn't help it, nor I must say did the driving a manual on very twisty windy roads when the gear changes had to be done with the right hand.  He had to drive because my English license says I have only been driving for one year and the insurance for me to drive was ridiculous!

I will see how many days I can cover with this blog.  The uploading is very slow so it may take a few goes for me to catch up!

On Tuesday we went for a drive up into the mountains (Monti Sibillini) around Umbria and the border of Le Marche.  In the winter this area is a snowfield and there were chairlifts and ski lifts on various hillsides.  It was incredibly beautiful but we did not take many photos because it was too hard to stop!  Here is a typical view though: 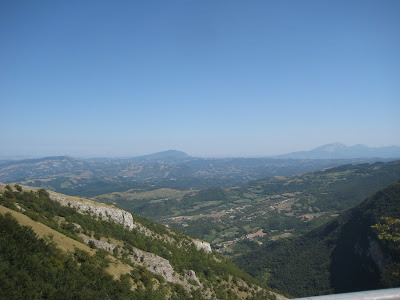 On Wednesday we stayed in Spoleto and went for a walk to find the Roman Theatre.  There is not much to see there other than a small stretch of the wall on the outside and the occasional glimpse inside through  the broken boarding that is on all the windows. 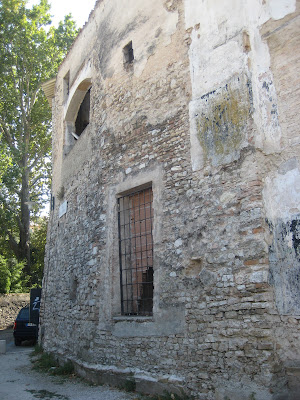 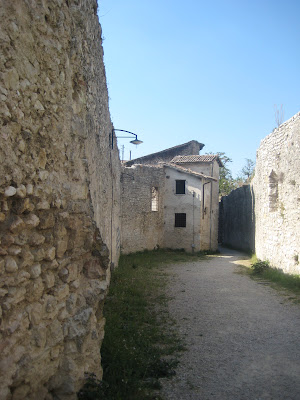 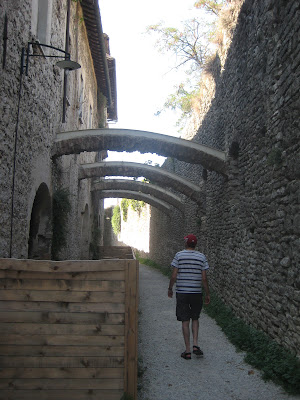 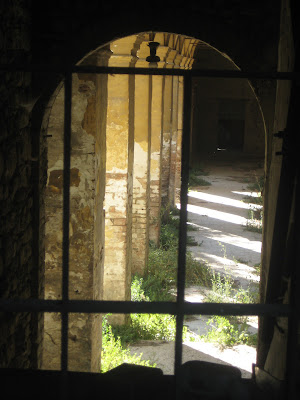 We also visited our favourite gelateria - the pear with grappa and the chocolate orange were divine!! 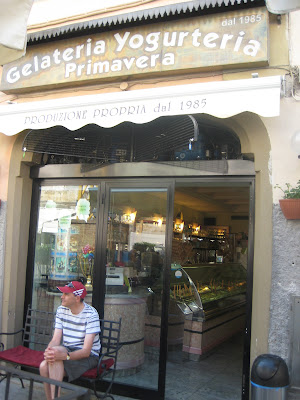 One night, out the front of this shop, we were treated to the sight of a guy dressed up as a Roman Warrior with a boom box karaoke machine singing along to Robbie Williams 'Real Love'.  It was hilarious!  He then handed out little credit card size fliers to groups of young men.  I think it was for a gay club because one of the young men very happily gave his to me when he heard me saying I wanted one for my journal!
On Wednesday night we visited the most fabulous little restaurant and I am so sorry that I didn't take my camera out to dinner that night!  It was gorgeous and the food was fabulous too!  We had a pasta that was done with bacon and green beans....ohhh!!!
On Thursday we visited a little town called Spello.  It is an ancient village and the home of many artists.  They had a gallery there devoted to Norberto.  It has some of the coolest paintings of flying monks!  Just loved it.  The photo of the statue of St Francis on the horse in Assisi on my previous blog is one of his works too!  Spello was lovely, but it was hard work making our way up the hill in the heat, so again first stop was a gelati! It was well worth the trip. 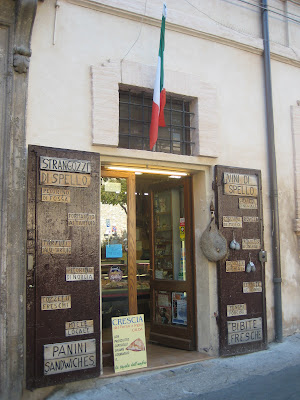 There was an embroidery display in this hall and the chariot and the mangonel that follow were the displays in the front foyer. 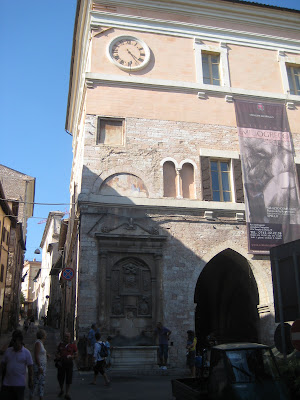 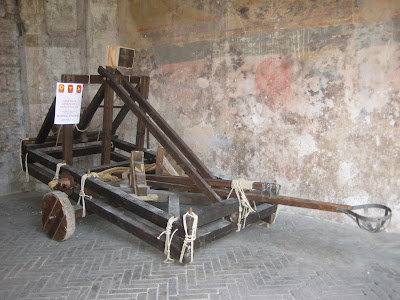 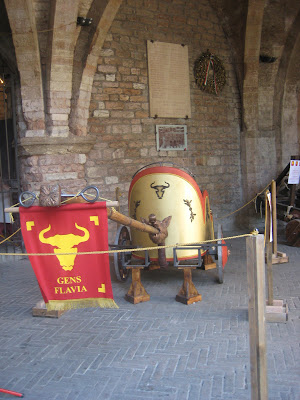 A sundial.  It was a work done by a local artist as a memorial piece. 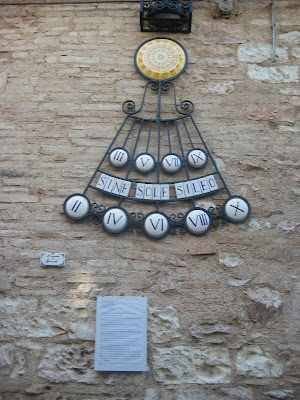 Porta dell'Arce (a gate from the Roman ages) 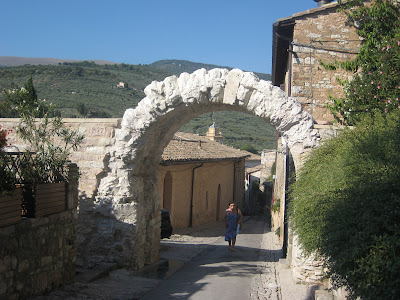 San Severino a 7th century church!  When we went inside there was a nun and another young woman playing the guitar and singing.  It was absolutely beautiful.  Think Enya meeting with angels! 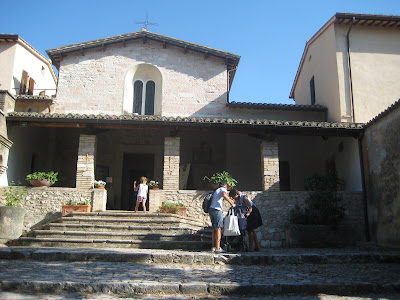 The wall and tower connected to the church. 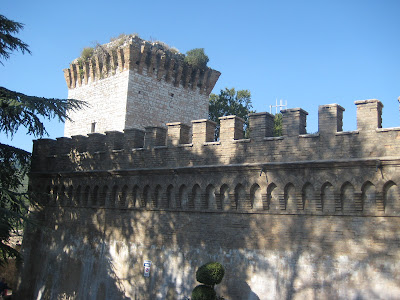 Some of the fabulous roadways in Spello. 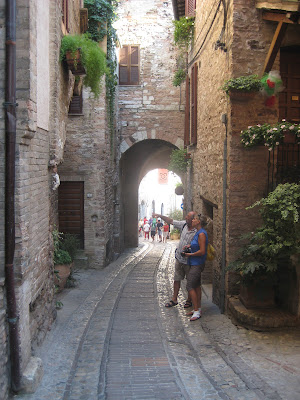 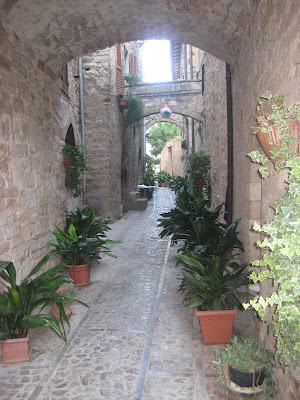 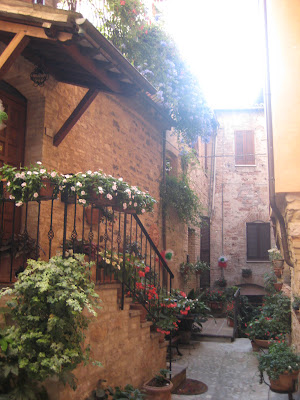 The main gate into the village. 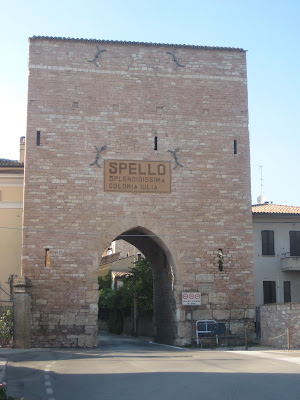 Friday morning I started the day with coffee and a chocolate croissant in the artists' cafe near our apartment. 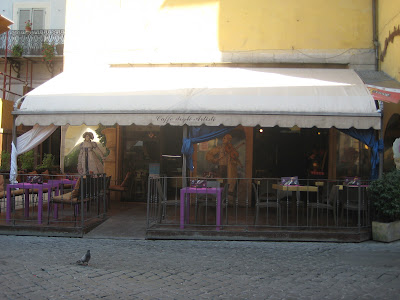 Again we had a lazy day, went for a walk and had a very late lunch in another restaurant just near our front door. 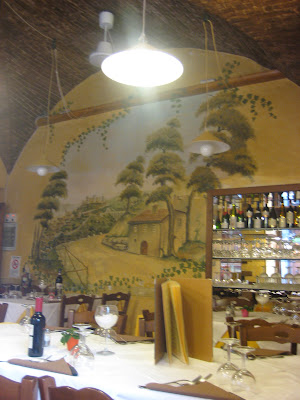 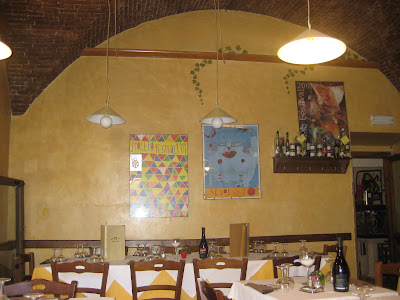 We were the only ones eating at this time, but we had walked past many times and seen it very busy.  We had a pizza that was not the best we have had on this trip, but still better than many you would get in Australia!

On Friday night the lady who was our host invited us to join her, out at her family property for 'cake after dinner'!  We drove out there (about 20 minutes out of Spoleto in a village called Poreta).  She had guests from her two other apartments there as well as us.  The other two couples were lovely people.  One couple were from Milton Keynes (just out of London), but were both born in Halifax, 7 miles down the road from where Richard was born.  The other couple were from Bavaria and were both special needs teachers!  You can imagine that we all found a lot to chat about!  The cake was delicious - zuppa inglese and an apple cake followed by watermelon! It was a great night.

I will leave this here and follow up with Rome soon!  Bye for now (Richard says I have to add 'too busy admiring my new shoes!').

Those are some neat pictures. Here in the U.S. you'd likely not find any roads so narrow as in that village. It looks so romantic!
Timaree

This looks like an amazing adventure! What wonderful pictures.