We have had no internet for a couple of nights so I have become a bit behind with my blogging!  I wrote the following when we arrived home from Pompeii on Tuesday night:
Our day started with a drive from Nocelle to Pompeii.  Once again it was madness on the roads with someone beeping at us at one stage for driving too slowly - we were 10 km/hr over the speed limit, but apparently that was not fast enough!  We are constantly amazed by the cars and scooters that just pull out straight in front of you as if you did not exist.  I think even more incredible is the number of pedestrians that step straight out in front of cars and then meander across the road as if they are strolling through a park!  Today at one point as we were driving on the main highway, we were following an old lady walking down the road on one side and about 3 or 4 young people on the other with the footpath almost empty beside them and they seemed annoyed because we wanted to drive on the road.  At another point two men stood in the middle of the road for a chat and at another a scooter rider road along holding hands with the driver of the car beside him!  It is insane!  Anyway enough of my rant about the drivers – I nearly said roads, but they are another matter.  A lot of the roads would give the term ‘goat track’ a bad name!
Once we made it to Pompeii we were welcomed by the sound of  the bells in the bell tower.  Then we found a bar.  We needed to go to the loo and the cheapest and easiest way in Italy is for me to have an espresso coffee standing at the bar for 80 or 90 euro cents and then we both use the loo!  Other than that it can cost up to 1euro 50 cents each to use a toilet!  So win/win I get a coffee and we get to go to the loo for less than a third of the cost!
The Bell Tower in Pompeii 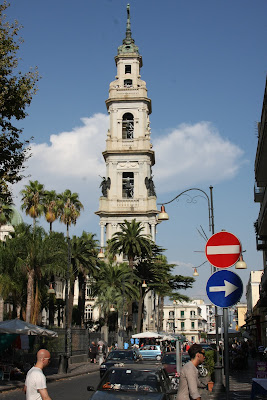 Next we had a parking fine to pay…another story… and went to the post office to pay it.  We were standing around trying to work out which ticket to take of the three options for the turn taking machines when a lovely man came up to help.  At first he thought we should ignore the fine as we are from another country!  We told him the car hire company would chase us and charges us fees on top of the fine so he then pushed up to a counter to get the form for us to fill out.  He then filled out the form for us and then took a slip from two of the three options and then decided ‘no we wouldn’t wait!’  He pushed up to the counter again and apparently explained to the guy behind that we couldn’t speak Italian and we were called straight up.  We paid the fine, he said ‘now you have a good picture of Italy and Italians’, shook our hands and sent us through the doors of the post office!  We decided Italian people must have a behind the wheel persona and an everywhere else persona!
Then we headed off to do what we had really planned with our day and went to the archaeological ruins.  My goodness they are amazing.  We went to Athens earlier this year and were impressed by what we saw.  Pompeii is astounding with the amount of stuff that is there.  The site is over 66 hectares, 44 of which have been excavated and 12 are open to the public.  There are casts of humans who were killed when Vesuvius blew and the buildings they have unearthed are amazing.  There are frescoes on walls, statues and pottery all immaculately preserved.  The road ways are all very obvious and from archaeological records they have replanted to give very clear representation of what it was before the destruction.
The site was incredibly hot, with few shady spots to find relief.  There were stray dogs everywhere!  Here’s some photos to give you an idea of some of what we saw:
The statue of Apollo in the Temple of Apollo 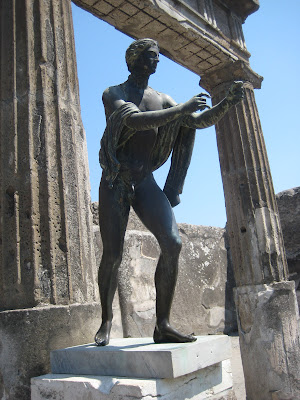 The altar in The Temple of Apollo 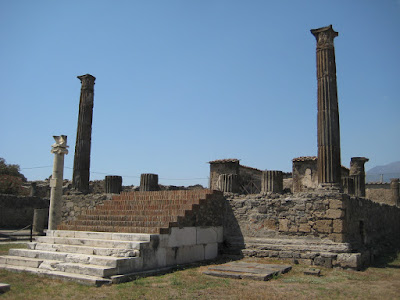 The statue of Dianna in the Temple of Apollo 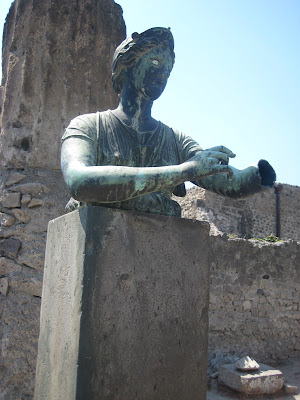 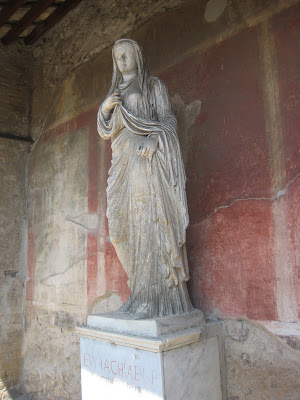 Mt Vesuvius as the backdrop to the archaeological site. 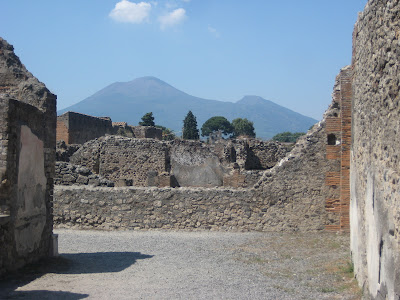 The frescoes that are still there are incredible! 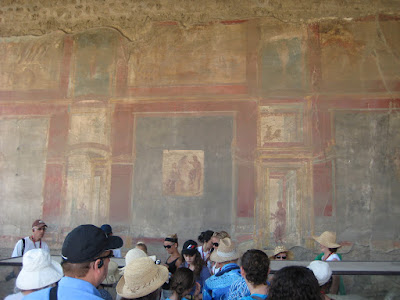 These are in the bath house 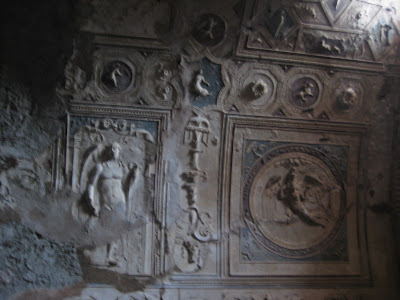 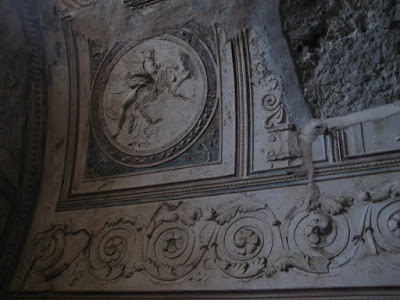 These were in a home 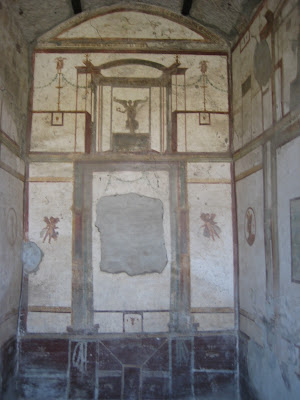 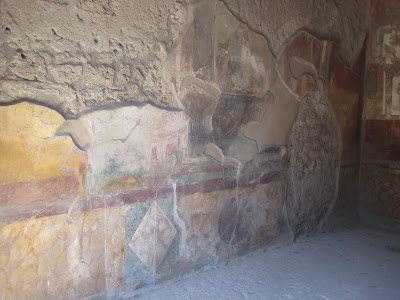 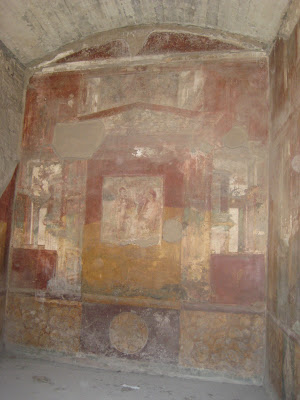 ...and these were the 'inspirational paintings in a brothel! 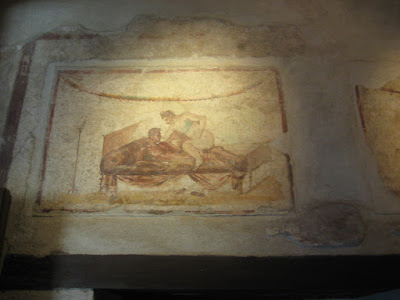 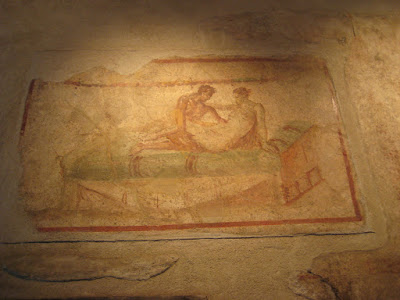 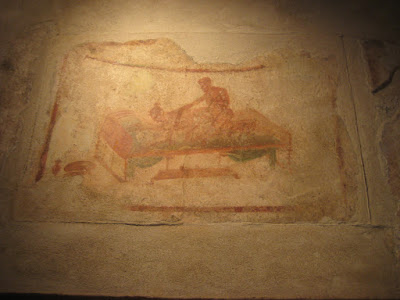 This is Priapus.  He is from the brothel too and holds a phallus in each hand, he is a representation of male virility! 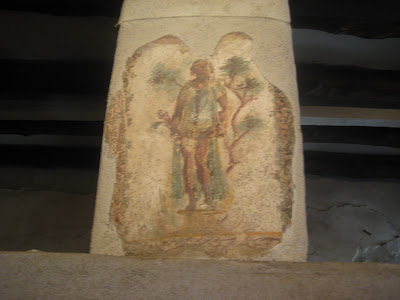 This was the bakery. The cylindrical structures were for grinding the grain and the oven looked like a massive pizza oven! 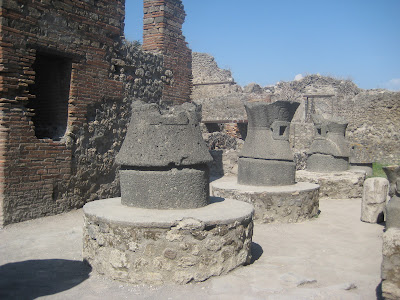 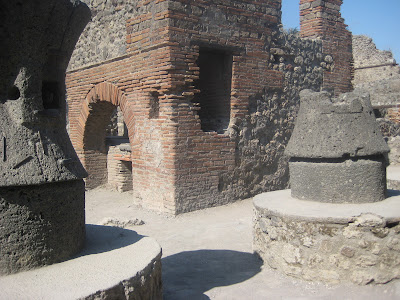 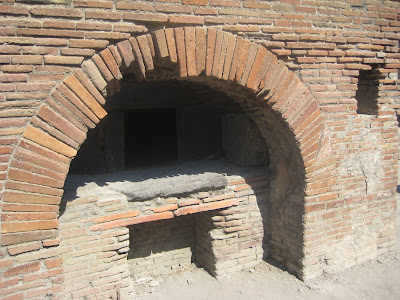 We left the site after about 4 hours of walking around and walked back into the centre of Pompeii.  We grabbed the obligatory gelato on the way and then a cold drink and started the drive back home.  We thought it was going to be a horrible trip, but it was relatively smooth sailing!  We stopped at a restaurant in a 'village' (there's really only two restaurants there) before Nocelle on the way up the hill and had one of the best pastas we have had in Italy!  It was homemade pasta with a tomato and clam sauce.  We then got home about 8:00pm and had a quiet night!
I will add the next two days soon.  Will probably type them up tonight and add them tomorrow providing we have internet access!  Bye for now!
Posted by Ali at 7:15 pm

Girlfriend, you are going to come home exhausted! I'm loving being on this journey with you. I remember going to a Pompeii exhibition when i was at primary school. At that time, the most exciting part of the excursion was the bus trip there and back. Now that I'm so much more mature, i'm sure i would appreciate the history aspect, as you have. Enjoy the day. Jane x

pay to go to the toilet... no way! mind you after a coffee you would need to go again half an hour later!
all those frescoes... did you get to see where the bodies were.... did you see the plaster casts... I watched a show on austar... had me mesmorised...
so nice reading your blogs....

Yes I saw the plaster casts of the bodies, but didn't photograph them....just seemed wrong to me. You could see the expressions of terror on their faces. Horrible really.